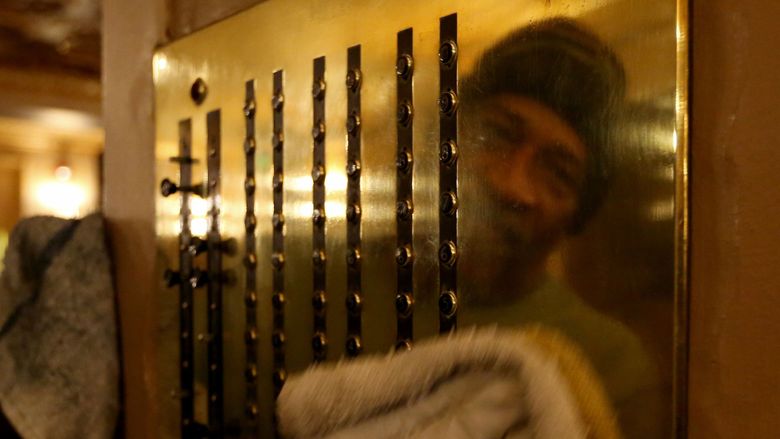 The people who make the messes and those who clean them up live in separate worlds.

JOHN ODEN MAKES a call to air-traffic control, gets the all-clear and then starts driving his pickup down the middle of the airport’s central runway in a scene right out of a Michael Bay movie.

Despite the fact that this is midday and roaring passenger jets have been taking off and landing, this is no stunt.

Oden, an operations specialist at Seattle-Tacoma International Airport, is on the lookout for FOD — foreign object debris — anything that might get sucked into a jet engine or smash against a plane’s fuselage.

A 27-year employee at the airport, Oden is known among colleagues as an eagle-eyed FOD detector who can spot a potentially dangerous sliver of plastic or metal from yards away, and sure enough, he quickly pinpoints several pieces of flotsam that have somehow made their way out onto this most hazardous of workplaces.

He stops the truck, gets out and walks into the grassy median to retrieve a piece of clear plastic one minute, then later spots a small but heavy piece of steel on the tarmac closer to the terminals.

FOD is everywhere out here, and all it takes is one errant object to cause a tragic mishap, such as the 17-inch titanium strip that punctured a tire on an Air France Concorde jet during takeoff in 2000, causing a fuel-tank rupture that downed the plane and killed all 109 on board, plus four others on the ground.

Editor’s note: In 2016, Pacific NW magazine will explore our world of work. In Seattle’s workplaces, one thing you can count on is change. We’ll try to help you make sense of it.

More from the series:

One of the biggest FOD sources is the planes themselves, in the form of plastic wrapping, tools, screws and bolts left by maintenance workers, and luggage tags from holds, to name a few culprits.

Three or four times a year, crews will go on “FOD walks,” in which workers form a human chain and move in concert across the airport grounds in search of debris.

He states his work mission as if it were a mantra: “Safety follows good housekeeping.”

BUT AS WE jet off to getaways and family gatherings and business trips, how many of us even pause to think that while we roar by at speeds approaching 200 miles per hour, a whole crew of airport employees is out watching for trash on the runways, taxiways and tarmacs to keep us from crashing?

People are constantly cleaning up for us, at home, at restaurants, in the streets and Dumpster-dotted alleys, after a night at the club, at the end of the day at the office, after the bus has made its last run, on the runways of the region’s busiest airport.

For the most part, we and our cleaning crews live in separate worlds, brushing past each other and maybe exchanging awkward pleasantries but rarely interacting in a meaningful way.

According to the Bureau of Labor Statistics, there were 18,290 janitors and cleaners and 6,420 maids and housekeepers in the Seattle-Bellevue-Everett area in 2014, the most recent year available. These workers earned average hourly wages of $14.27 and $12.07, respectively.

Salaries like those won’t catapult anyone into the American dream, and the jobs cleaners do are all the more remarkable because we often don’t acknowledge how necessary they are.

In recent years, UNITE HERE Local 8 has been working to unionize and raise awareness about the needs of Seattle-area hotel housekeepers, all in an effort to improve working conditions, pay and benefits as the region undergoes a boom in hotel construction.

Beyond the push for better compensation, though, there’s a social benefit to the wave of activism around lower-wage jobs, as people who do the kinds of work we tend to ignore develop a stronger voice.

Still, do guests at the Doubletree Hotel by the airport know that when they check out, a mother I spoke to for this story who has lived in America for only a year will spend all afternoon and evening scrubbing out the sinks and tubs they dirtied, then go home to three kids who will wait up until midnight just to see her before going to sleep?

She doesn’t mind the hardship. As an immigrant in search of a foothold, she says she needs the work.

Sometimes guests go out of their way to be nice, the housekeeper says.

They actually tidy up their rooms before checking out, bringing a little dignity to a social dynamic often defined by silence and obliviousness.

WE HAVE A STRANGE non-relationship to the people who clean up for us, but one could not do without the other.

In fact, at increasingly busy airports like Sea-Tac, there’s a huge push to reduce FOD. Debris is estimated to cost the airline industry more than $4 billion a year in damage to aircraft bodies and engines.

“When a tire explodes on the runway, it takes about an hour for a couple of us to clean that up; it’s a million pieces,” Oden says. “It’ll close the runway.”

Oden points to rows of oscillating yellow scanners positioned along the runways that operate 24/7, constantly monitoring for FOD and relaying alerts to airport maintenance crews.

With an airport that handled 42 million passengers in 2015, with more than 1,000 flights a day, you have to expect plenty of debris and surprises.

“There are a lot of unexplainables out here,” Oden says. “I’ve found panties.”

One time, he discovered “a huge black bra” on the taxiway.

An airport spokesman says cleaning crews at Sea-Tac collected about 9,000 tons of waste from the terminal and airfield in 2015 and about a fourth of that total was diverted to recycling programs. The airport has launched a campaign aimed at going even greener, by encouraging carriers to increase their use of on-site recycling services and investing in energy-efficient ground vehicles, among other things.

Last year, the airport sent more than 44,000 pounds of unused food from airport concessions stands to local food banks, which otherwise would have gone to the garbage.

Seattle-based visual artist Rodrigo Valenzuela incorporates themes related to labor and laborers in much of his work. He focused part of his solo multimedia show at the Frye Art Museum last year on what he dubbed the “13th Man,” a sly reference to the janitors who clean up after Seahawks games. The title references the Seahawks’ notoriously loud “12th Man” fan base, many of whom pay hundreds of dollars per ticket for each game at CenturyLink Field.

In staged photographs included in the exhibit, workers with trash bags, all people of color, roam the bleachers of an unidentified, deserted stadium picking up litter.

It’s an eerie series of images, one layered with race and class subtexts, that perfectly mimics the actual postgame spectacle of teams of workers cleaning high in the stands at the Seahawks’ stadium late into the night, sometimes in cold, wet conditions, after all the screaming fans have gone home.

In an experimental documentary video now available on Vimeo called “Maria TV,” Valenzuela juxtaposes footage of interviews with Latina maids, housekeepers and nannies against re-enactments of soap operas in which the workers portray fictional versions of themselves, to show the difference between how these workers are portrayed in the media and how they talk about their actual lives.

As a Chilean immigrant living in Montreal for a time, Valenzuela knew lots of struggling fellow Chileans who supported themselves by working on cleaning crews in that city. They’d work all night and sleep during the daylight hours.

“So they were really invisible participants in society,” he says. “You never saw them during the day.”

He’s always been fascinated by jobs that upper-income people don’t tend to pay attention to until they have to, like janitorial services.

In contemporary society, there’s a general expectation, a cultural norm, that public spaces be clean — spotless restrooms, polished floors, gleaming elevators, litter-free sidewalks, tidy hotel rooms and homes. But there’s not a corresponding appreciation for the people who keep those spaces clean or for how much time and physical effort it takes to make things look “normal,” he says.

“The only time that those kinds of jobs exist (in one’s mind) is when they’re not getting done,” he says.

“It’s the kind of job that has to be done day in and day out,” Valenzuela says. Still, “you can do a great job, but there’s no reward.”

Valenzuela says he wants his work to spark an internal conversation in viewers about how our consumption and sometimes wasteful behavior clash with that expectation of cleanliness.

“We’ve created this standard,” he says. “But we also create the messes.”

THE VOMIT IS the worst.

Suzanne Brandkamp works on the 21-person janitorial staff for STG Presents, which operates Seattle’s historic Paramount, Neptune and Moore theaters. She does what is known as “show call,” which requires her to work nighttime events, doing things like restocking toilet tissue in the restrooms and cleaning up spills.

The job also requires being willing and able to take care of messes caused by “every type of bodily function one can imagine,” Brandkamp says during a conversation with some of her colleagues at the Paramount.

Brandkamp has learned to spot impending disaster in the form of concertgoers who drunkenly refuse to go to the restroom, even though they’re obviously sick from drinking too much alcohol.

“And then they throw up,” she says.

On some nights during show call, patrons will try to beckon her in ways that aren’t exactly respectful.

“I’ve had people clap at me to get my attention,” she says, clapping her hands for emphasis, “like a dog.”

But that’s not all a janitor at one of the theaters has had to put up with.

Yes, more than a few people think it’s OK to trim their nails in the lobbies and stairwells of some of the city’s loveliest performance venues.

Lonnie Haynes, a longtime member of the janitorial crew at the Paramount, says that on any given day, he finds fingernail clippings on the floors of his work spaces.

Haynes tries to be a gentleman about it by suggesting, way too kindly, that the nail clippings might be the result of nervous nail-biting.

“I just take it as it comes,” Haynes says.

Haynes compares cleaning the Paramount to tidying up a really big house.

Both Brandkamp and Haynes say they like their jobs and feel rewarded by the work, despite the creepy window into human nature it offers them.

Brandkamp, who has a literature degree, says she’s worked a lot of jobs in her life, but she’s had more people come up and thank her at this one than at any of the others.

She tries to pass on the goodwill by doing her best to tidy up so that the morning janitors, like Haynes, have fewer trouble spots when they start their shifts.

Haynes says it’s all about teamwork.

By the time he arrives at 6:30 a.m., the backstage areas have already been cleaned. So he focuses on sweeping and mopping the Paramount’s main floor, balcony and mezzanine areas.

Besides the sound of vacuums, the place is dead quiet.

By the time the show lights go on, he’s long gone.