ORCA WHALE L25 was born in 1928: before any of the dams on the Columbia or Lower Snake rivers were built. Back when Washington’s population was about 1.5 million. Back when catching a salmon in Puget Sound was an everyday wonder, for orcas and people alike. 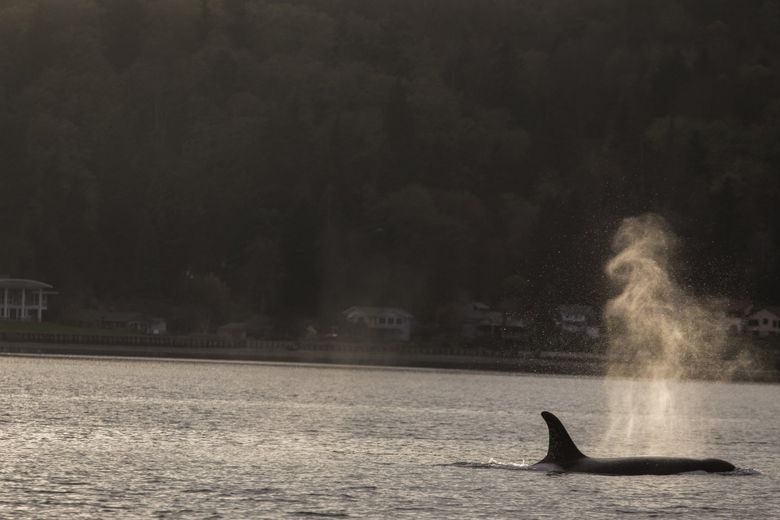 Today L25 is the oldest southern resident orca whale, and by a lot, with a more than 40-year gap between her and the next oldest member of the endangered J, K and L pods. She is an environmental archive, the matriarch of her clan, carrying on the teachings of her mother and grandmother before her.

The Seattle Times followed the fate of L25 and her extended family in the award-winning series “Hostile Waters: Orcas in Peril,” published by The Seattle Times in 2018-19. We built on that reporting in the book “Orca: Shared Waters, Shared Home,” being copublished June 1 by The Seattle Times and Braided River. The book takes the story further, to the historical roots of an extinction crises, as both the southern resident orcas and the Chinook salmon they depend on struggle for survival.

The book excerpt I chose for this edition of Pacific NW magazine comes from a November day I spent reporting with the southern residents, on a research boat piloted by Brad Hanson, biologist with the National Oceanic and Atmospheric Administration’s Northwest Fisheries Science Center in Seattle. All three pods of the southern residents had been spotted just offshore Point Defiance, and Hanson was headed out for survey work. Did we want to come along?

Did we ever. So, Seattle Times photographer Steve Ringman, videographer Ramon Dompor and I clambered over to West Seattle to meet Hanson for a day with the whales.

The J, K and L pods cruised the inland waters of Puget Sound, right off the shores of Tacoma, all along Vashon and Maury islands, and were headed to Elliott Bay as the sun went down. Downtown orcas: Who else has that?

This excerpt shares the elation and wonder of that day with the southern residents, as they slapped their pectoral fins on the water, swam upside-down along our boat, and hurled themselves through the air, breaching seemingly just for the fun of it. They surrounded us on every side, and their epic exhalations as they breathed next to us were a reminder of our shared lineage. For they are mammals, like us. With deep family ties, like us. And a learned culture, passed generation to generation, like us. Orca society is one of the most sophisticated and ancient in the animal world.

I’ve often thought that if we could understand her language, we would hear L25 say the same thing we do when the generations gather to go salmon fishing in Puget Sound: I used to come here with my grandparents, and there were so many fish. Where did they all go?

We could lose the unique gift of sharing our home waters with these species, who were here long before us. As the region grows, will L25 and her family still be able to catch Chinook salmon here — or will they chase only the memory of them? As we grow richer here in the Puget Sound region, will we also grow poorer?

It is up to us to decide.