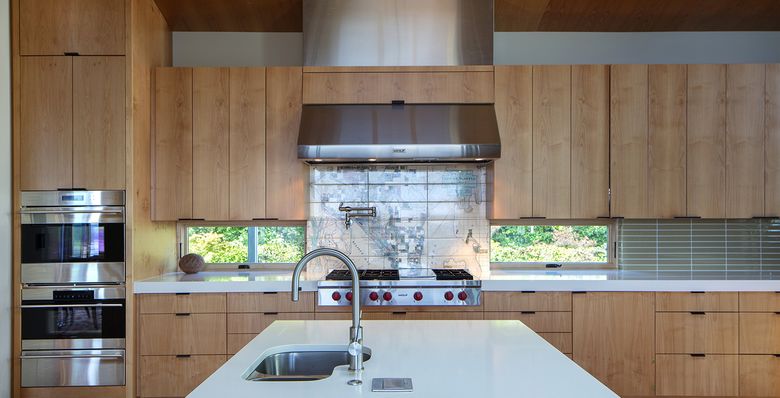 The kitchen island holds a microwave drawer and a steam oven for reheating. The backsplash, custom-screened onto tiles and hand-painted by Pratt & Lambert Paints, is a map of Seattle and Queen Anne from 1890, homeowner Paull Marcus says. “We had to have it. It’s so special under the pot-filler.” (Steve Ringman/The Seattle Times)

The home, originally designed by architect Raymond Peck in the 1950s, lives up to its potential by reclaiming its views, but not blocking its neighbors’.

WHEN SEAHAWKS HUDDLE in your living room for Monday Night Football, and they’re the ones snapping photos — of your home — you know you’ve got something special going on.

A happy medium in Washington Park

Rebuilding a Bainbridge Island home with a sense of history

“We bid and won, and (some players) came for 10 of our friends,” says John Birrer, who shares this super-special Queen Anne hilltop home with his husband, Paull Marcus. “Cliff Avril, Bobby Wagner, K.J. Wright — it was a fun event.”

Before John and Paull moved in — and hired Rick Mohler and Rick Ghillino, “the two Ricks” of Mohler + Ghillino Architects — this midcentury modern home already had an exceptional pedigree (architect Raymond Peck designed and lived in it with his wife in the mid-1950s), but it wasn’t exactly living up to its special potential.

“It was beautiful the way it was,” Paull says. “But we just had a peekaboo view. I climbed up on the roof and was blown away by what was possible. It took us 10 years.”

Back before Seattle, and Queen Anne, built up, “The house once had sweeping views of downtown,” Mohler says. “The plan was to add a floor and ‘flip’ the bedroom and living levels to provide views from an open living/dining/kitchen space, with a home office for John. Fortunately, the site topography allowed us to add a floor without blocking the views of the neighbors behind.”

That’s some thoughtful neighboring right there: John and Paull’s backyard (with sturdy artificial turf for their pampered Standard poodles, Marcia, Jacki and Beulah) became the unobstructive staging area for Woodman Construction, and now their impeccably remodeled-from-the-studs three-level home “blends in with the hill and Seattle,” Paull says.

“Thoughtful” applies everywhere, actually — and starts the second you walk in, by kindly showing you exactly where to go.

“One of the challenges with the living level on the second floor is to feel natural,” Mohler says. Here, the entry invites you into “a two-story glazed space that immediately connects to the living level above.”

“When people come in front, they angle upstairs,” John says. “We painted the door to the (entry-level) master bathroom to look like a wall. When you come in, your eye goes to that, and you go up.” More guiding light: a giant, color-filled aquarium at the landing, which lures you right up the stairs.

So that’s easy (as is the no-need-to-kick-off-your-shoes vibe) — but from here, you might want to pop on your deep-thinking cap. This is a thoughtful home, for sure, and at times, it requires some real thought:

• Just atop those lovely stairs, you could spend a whole lot of time pondering the powder room — and you’d be awfully comfy: There’s a luxurious sitting area here (in addition to the expected one). “We had a house in Dallas with a large powder room where people would camp out,” John says. “That’s why the chairs: You can go powder your nose and gossip. It feels very inviting.” While you’re there, appreciate the dramatic onyx sink and countertop — and all the flying tile butterflies. “Every butterfly, the colors, were deliberate, and the shapes, the wings,” says the home’s interior designer, Shamneez Pirani, of Pirani Design. “We spent an afternoon on the floor” arranging them.

• There’s other art in here, too (everywhere, really) — also not what you might think: The large-scale painting looks like a perfectly pleasant childhood scene, except there’s a little Ku Klux Klan figure in one corner, and an angel in another. “We try to find female artists who tell their stories through children, especially through dark stories,” John says. “Love conquers hate. It’s a very positive story. They’re all meant to be thought-provoking.”

• Farther down the hallway (where a giant barn door exposes a subtly stunning art niche once it slides to close off John’s office), you might feel a little off-balance. Success! The living room holds beautiful built-ins custom-designed for art pieces, but it’s also purposely, unusually, asymmetrical. “Symmetry’s a little boring, actually,” John says. “We wanted not obnoxious, but something not quite normal — subtle but meant to nudge you a bit. It’s deliberate. It’s another long-thought project.”

• On the lower levels, for a while, things feel familiarly warm and contemporary — the guest room and existing mother-in-law apartment received just new Sheetrock, windows and doors after the stairs moved — but then there’s another set of stairs, and suddenly, it’s intensely industrial: brick, polished concrete, exposed steel. Suddenly, it’s a surprising, totally awesome poker room/bar and wine cellar. “This was another of my projects,” Paull says. “I wanted to fit in as many bottles of wine as possible. We have 2,500.”

John works in senior management for Afiniti; Paull says that, for the last year, “The house was a full-time job.” There are jobs, and then there is the thoughtful, collaborative creation of an exceptionally special home. “It’s the culmination of 25 years together,” Paull says.