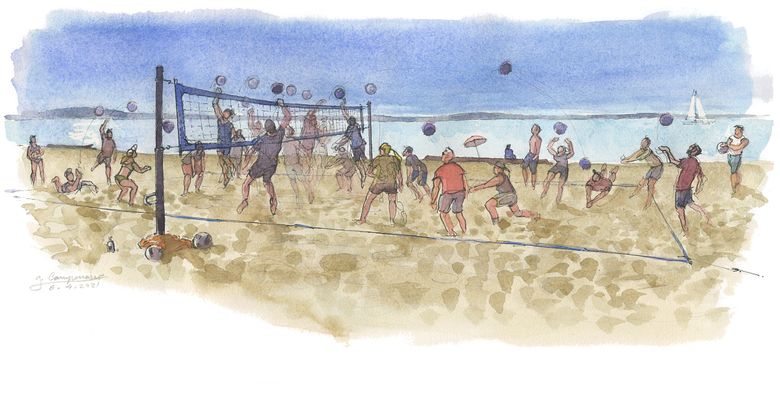 Multiple teams step up at this court as I fill my sheet of watercolor paper with as many players as I can carefully study. The result is a bit of a time-lapse, old-media style.

Turns out this isn’t just any evening at Seattle’s most-California-like beach. It’s the return of the traditional “Alki Fridays” volleyball league, which had to be canceled in 2020 for the first time in 16 years due to the pandemic.

Pointing to the seven courts where matches are underway, organizer Willie Moneda says as many as 150 people take part in the weekly coed tournament, which lasts through mid-August. It works like this: Anyone can play, but you don’t sign up as a team; you pick a level based on your skill, says Moneda, who takes care of placing you with a group of your own caliber. Many players have never even met before, which explains why I overhear young and old introduce each other for the first time.

The scene of play and socializing among strangers is an uplifting sign of how far we’ve come since the pandemic started. Moneda says people have not touched the ball in a year, but everybody is happy.