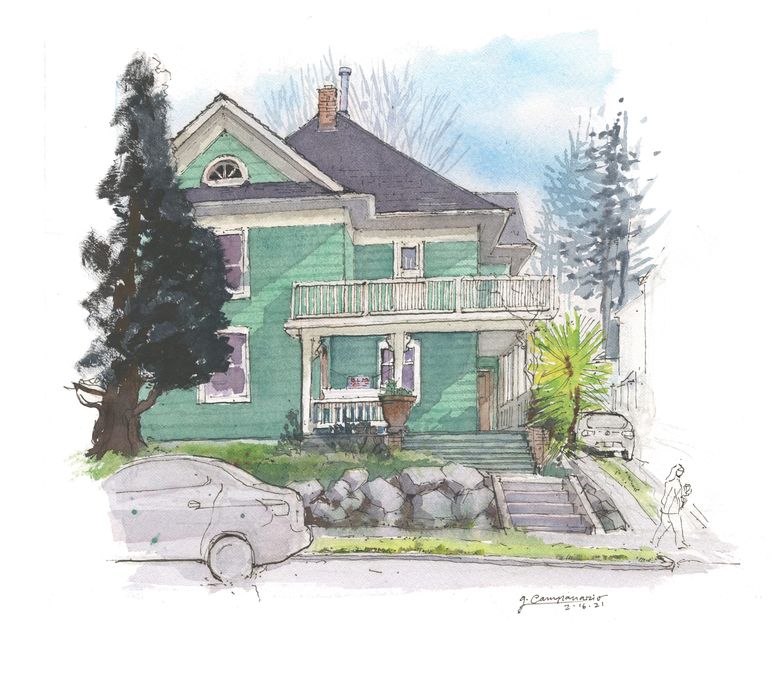 THIS THREE-UNIT RENTAL on 14th Avenue East on Capitol Hill looks like any other charming old house that might be here today and gone tomorrow, perhaps replaced by a boxy block of apartments.

But landlord Erie Jones, who has owned the property since the early 1990s, isn’t planning to cash out on the valuable piece of real estate. Not now. Not ever.

The Victorian-era building has a remarkable history, Jones tells me on a recent afternoon during a socially distant sketch/interview on the porch of the house. Between 1902 and 1909, it was the home of the Cayton-Revels, a prominent Black family who purchased it before the area became off-limits to African Americans due to redlining. Susie Revels was the daughter of Hiram Revels, the first Black U.S. senator during Reconstruction. Horace Cayton, who was born into slavery, was a journalist and publisher who founded the Seattle Republican newspaper.

Jones, a retired elementary school teacher and history buff, learned all this after finding documents signed by Hiram Revels under the attic’s floorboards and eventually tracking down members of the family, including the great-grandson of the Cayton-Revels, Harold Woodson, who lives in the California Bay Area.

Woodson and Jones have since become “like brothers,” and Woodson says he’s overjoyed the house has been approved for historical landmark designation. Jones said he and his wife plan to leave it to a land trust or community organization that will preserve it for generations to come. “We don’t want anybody to tear it down, even in 100 years,” he says.