NOT LONG AFTER I moved to the Pacific Northwest to take a job at The Spokesman-Review, I was sent to Portland to cover a conference convened by President Bill Clinton to talk through how to protect old-growth forests. 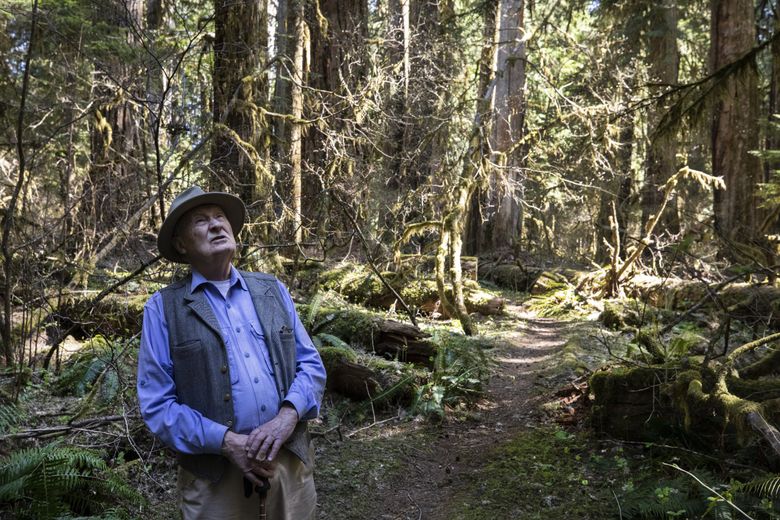 Meet the eminent scientist, now 84, who vowed as a boy to protect Washington’s old-growth forests

The Northwest Forest Plan, subsequently adopted in 1994, rethought management of 24 million acres of federal forests from Washington to Northern California. And while it didn’t save the spotted owl, the putative start of it all, the plan still is regarded as one of the world’s most ambitious actions to look beyond management of trees primarily for lumber production to forests, to be conserved for preservation of biodiversity.

Jerry Forest Franklin, now 84, was a chief architect of that plan. For several days this spring, Seattle Times photographer Steve Ringman, video journalist Lauren Frohne and I walked a last stand of old growth of the Gifford Pinchot National Forest, and sat with Franklin at his cabin in the woods, to listen and learn as he reflected on old-growth forests, what they are and why they matter.

What follows is a profile not only of the forest ecosystems Franklin has devoted his life to, but of Franklin himself, too. For after all, his relationship with forests was never just professional. It’s personal.

In the Gifford Pinchot National Forest, there is a circle of 500-year-old Douglas firs that is one of the wisest sources of counsel he knows. And it is to these trees that over his long career Franklin has held himself accountable.

“Everybody needs to have some superior being to report back to periodically on what they are doing and what the justification for it is,” Franklin says. “And they certainly have age on me.”

We would all do well to be mentored by forests, Franklin says.

“We need to be thinking more and more about a partnership,” he says. “Our job is to collaborate with nature. To work with natural processes for the mutual benefit of the forest ecosystem, and society.”

He sees a need for not just a better understanding of forests, but for a new relationship.

“If trees were sentient in the sense that we could communicate with them, I don’t think trees would mind being utilized,” Franklin says. “What is offensive is to not be respectful. And to not appreciate the complexity, the richness, the beauty that’s present.

“There’s no excuse for that.”