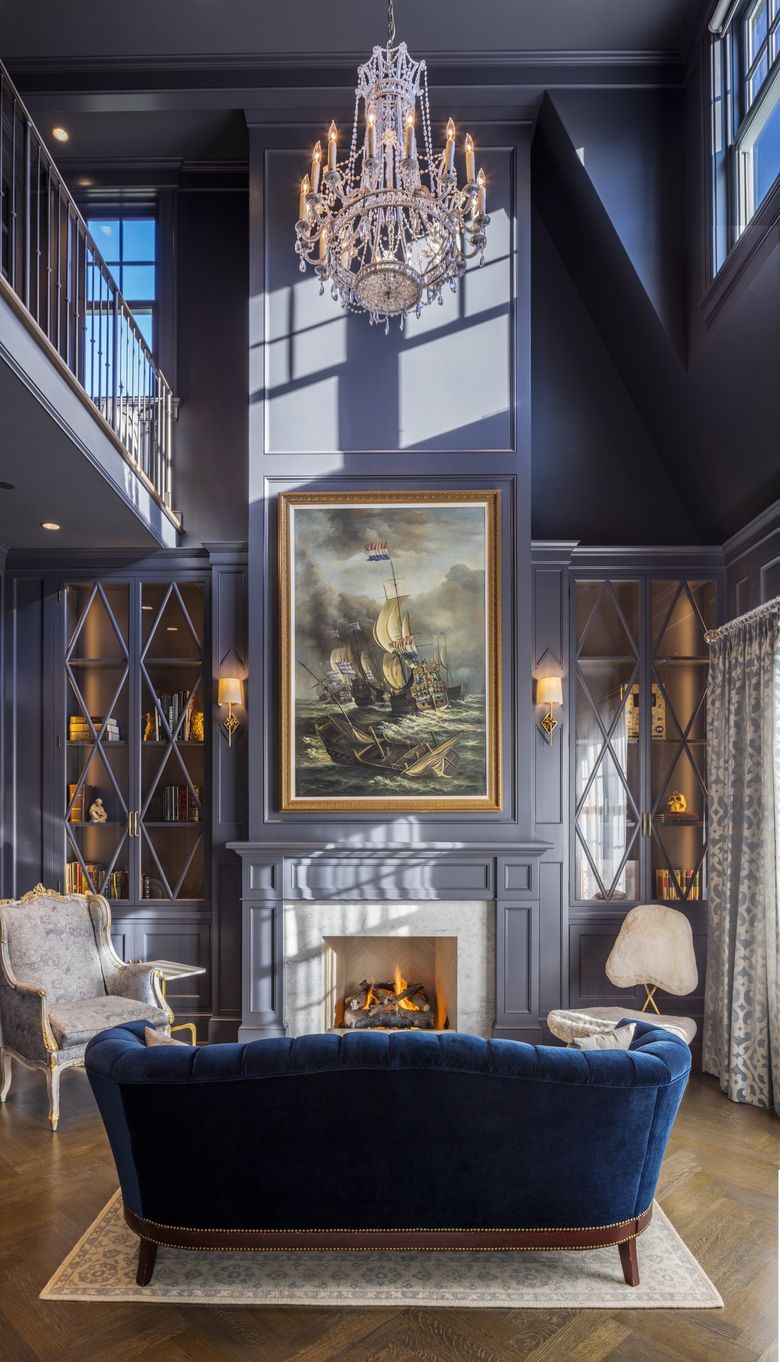 Stunning Seattle-area fireplace designs to stoke the embers of inspiration

IMAGINE THE ELATION in the cave that historic prehistoric day when fire became a usable tool, and not just an unpredictable threat from malevolent sky bolts. Warmth eased the chill. Flame lit the night. Heat seared raw meat. And everyone started smelling like summer camp, patiently awaiting the invention of s’mores.

In the millennia since, we inventive humans have evolved exponentially from that first toasty moment, eventually embracing flame-free TV dinners, clap-on nightstand lights and ultrasonic buzzing-predator zappers — yet we still welcome actual fire in our actual homes.

Turns out, after all these ages, even if we don’t need a fire nearby to survive, there’s still something elementally satisfying about this earthly element — togetherness, peace, psychic and practical comfort — especially when it’s safely controlled, and extra-especially when it’s artfully contained in an advanced work of architecture.

“A fireplace does have that iconic feel of family and home that it’s always had,” says Amanda Cavassa, a principal at Stuart Silk Architects. “And maybe it’s emotional now instead of physical; we still need the fire as that symbol of warmth. Maybe it goes back to the original basic human needs, and so we haven’t given it up yet; we’ve just started forming it in different ways.”

These days, we’re still warming and forming around classic, match-lit wood-burners, but also artsy natural-gas fireplaces that eschew even the look of wood for sparkling glass chips or solid concrete balls; eco-friendly bioethanol-fueled showpieces that eschew the blue pilot light; and easy electric options that eschew smoke, and fire itself. We can control our fireplaces remotely, flick a single switch like a high-tech flint or click an app from a cave away.

Our pull toward flame is as much a part of our foundational human nature as a fireplace is a central hub of our modern lives — and of architecture through the eras. Frank Lloyd Wright designed hundreds of them.

“Architecturally, if you go back through history, especially residential design, the fireplace is a pretty prominent element not only inside, but also from the outside,” says fellow fireplace enthusiast and founding partner Stuart Silk, whose company portfolio holds its own impactful collection of innovative designs. “It’s hard to imagine a home without a fireplace. It’s the center of the home and an anchor. There’s security in how you and your family and friends feel when you’re around a fireplace. There’s kind of a grounding — an emotional security, or calmness.”

So maybe we don’t need to evolve out of every innate trait, right? Especially the extra-cozy ones? Maybe this one we celebrate instead.

IN A SENSE, a fireplace itself is a celebration — or, at least, an excellent centerpiece to one.

“We use it as a central point for family gathering spaces,” says Cavassa. “Our homes are designed around entertaining and/or intimate family moments, and the fireplace can be the thing that creates that anchor that everyone can gather around. Making the fireplace central to a space gives the room a focal point, so there’s also a focal point to that gathering for the people who are using it.”

One design element our early ancestors — and early architects — did not have to consider: a giant-screen, high-definition dual/dueling focal point.

“We are constantly pushing and pulling with the TV,” Silk says. “It’s a big fistfight with the fireplace, so we always have a lot of internal debate with our clients about their relationship with the fireplace and the TV, because sometimes they’re battling for the same space. In certain rooms, such as the living room, the fireplace always wins. But in other rooms — family rooms, bedrooms, entertainment rooms — the TV can win out.”

The two glowing contenders have battled to brilliant, balanced draws in brilliant, balanced spaces created by Stuart Silk Architects: in a contemporary home on Mercer Island, where a low, linear fireplace kindly left room for the TV above, for example, or in a side-by-side solution in Washington Park. “We were very clever here,” says Silk. “We made a contemporary composition using both the fireplace and the TV.”

In others, where a TV doesn’t even enter the ring, triumphant fireplaces clearly dominate:

● A long, linear fireplace anchors another room of that same contemporary Mercer Island home — this time with plenty of drama, but zero competition. “It didn’t have to fight with a television,” says Cavassa.

● In a two-story Laurelhurst living room, “It was a clean expression, a modern expression, where the mantel is really distilled down to one single wood line,” Cavassa says. “It’s open on three sides, so you don’t get the whole firebox feeling, and it’s a very simple linear fire and a much more modern treatment where each element is as simplified as can be.”

● For the historic renovation of a home filled with fireplaces — two exterior and three interior — in Seattle’s Harvard-Belmont Landmark District, “One is very traditional, carved marble, off the living room,” Cavassa says. “It’s a close-up blend of the traditional and the modern, which is a theme of this house. There’s another very modern treatment in another room, but using the same steel as a previous. They all share one piece of language or materiality to bring the whole house together.”

● And “the one that’s the most epic,” says Silk, is actually two. In a stately waterfront home on Whidbey Island, “We used two fireplaces in a large room. They are at either end, so they’re mirrored on the other side. The fireplaces doubly anchor this incredibly interesting room.”

THERE’S NO TV vying for attention in the living area of Golden House in Shoreline (so called because, in an earlier iteration, it had been an adult care facility called The Golden Age House) — even electronic boxes know better than to get in the way of that view.

Between the dreamy seascape and the magnificent fireplace stretching along one end of the open main level, there really is not much need for further entertainment. Unless you’d like to take a good look at the fireplace itself. It’s like an HGTV show you could binge all day.

When SHED Architecture & Design embarked on the remodel of this 1959 home, says architect Rebecca Marsh, “They had just a gas fireplace there in the wall: a really simple wall insert with decorative slate tile. We were able to use that existing chimney and redid the surface with CMU blocks and made that concrete bench.”

CMU blocks, as in concrete masonry units, “like you see in an old industrial wall or in school gyms, painted white,” she says. This is no old industrial wall. These are not painted anything. These Golden House blocks shine from within.

“What’s different about these is that they’ve planed the face, and you can see the different pieces of aggregate, the stone used to make the blocks, when you’re up close,” she says. “You see little grays and little bits of blue and little pinks that were all these stones used to make that block. It’s a really cost-effective material, used in a different application to elevate it.”

The re-imagined fireplace initially was set up with a working flue to burn logs, Marsh says, but the owners of Golden House opted to switch to bioethanol — an economical, efficient fuel source that requires no venting or flue — and ordered a biofuel insert (it just hadn’t arrived in time for fireplace photo day). “They picked one that’s almost like a little tray that contains the fuel; you can move it around. They don’t require a gas line.”

Could bioethanol become the fireplace fuel of the future? “I could see that happening,” she says. “I don’t think it’s really hit us yet, but biofuel seems like a great option. It’s a renewable fuel source, super-appealing.”

ARCHITECT TESSA BRADLEY offers a couple other eco-appealing options: 1. If you want an indoor fireplace, get one that plugs in. 2. Want an outdoor fireplace instead.

Bradley is a partner at Artisans Group, which specializes in extra-efficient, certified Passive Houses.

“People come to us and really want fireplaces; we don’t dash their dreams on the rocks of reality right away,” she says. “But we don’t do a lot of fireplaces in super-energy-efficient Passive Houses, because fire is not an efficient way to convert energy to heat. With Passive Houses, when you put a fireplace in them, you’re putting a hole in an airtight building. The minute you light a fire, the building gets up to 80 degrees, like a very big candle in a very small camping cooler. That’s what these homes are like — very, very, very efficient.”

Still, there is that whole primal fire thing. So they’ll maybe suggest a small, enclosed European model. Or, as Artisans Group partner Roussa Cassel said to Bradley, “The future is electric, baby.”

And, maybe something that’s not in the house at all, but handy enough for that fire fix.

“We put the fire outside, where you want it to warm you up, and keep the quality of the air in the house intact,” Bradley says. “We make the fireplace visible, so when you’re standing in the home, you can watch the flames and step outside.”

The award-winning Delphi Haus near Olympia — certified Passive and undeniably gorgeous — “is a great example of putting heat sources on enclosed decks that feel like outdoor rooms,” she says.

Pretty much anything goes outside, anywhere we can come together, warm up, hang out.

“If people have enough room in a backyard space for a social area, a lot of people like a firepit or steel bowl,” says architect Marsh, of SHED. “It brings the same social element of having a meeting space.”

Still other people, like the owners of an exquisite shingled home in Medina designed by Stuart Silk Architects, prefer “just an old-fashioned firepit: You dig a hole and put wood in it,” says Silk. “They don’t want any of this newfangled stuff. It’s just the perfect firepit: Adirondack chairs, old-school. No gas. Light a match.”

And there it is, as ever: fire.

Sandy Deneau Dunham writes about architecture and design for Pacific NW and is associate editor of the magazine. Reach her at sdunham@seattletimes.com.
Advertising