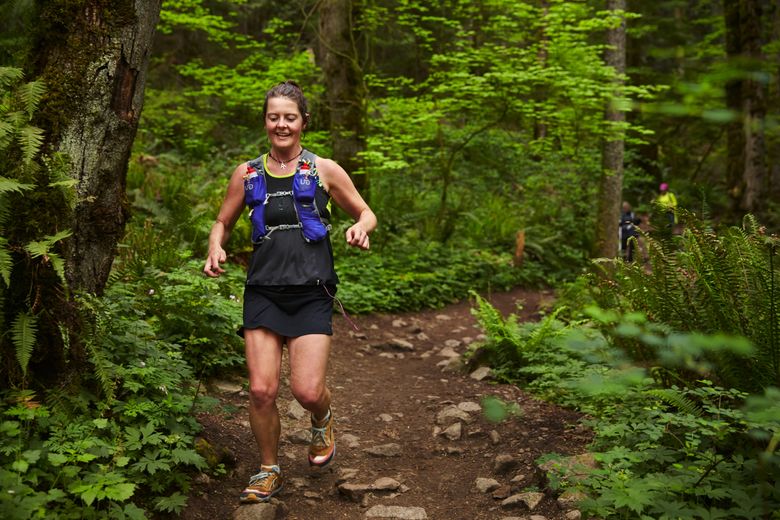 Record-setting hiker Heather Anderson runs the Chirico Trail on Tiger Mountain. Anderson completed 10 laps up and down for a total elevation gain of 16,600 feet, starting at 7 a.m. and finishing around 5 p.m. (Benjamin Benschneider/The Seattle Times)

The Edmonds woman is serious about hiking, running and climbing — and basically living outdoors, whenever possible.

HERE’S A QUESTION for all you backpackers out there: What’s your post-hike routine? A big, juicy cheeseburger and ice-cold microbrew? A long nap? A pass on exercising for the next couple of days?

What if you go on a really, really long hike? What if, say, you were to hike the entire 2,189 miles of the Appalachian Trail? And what if, just for argument’s sake, you finished it faster than anyone had ever done before?

You probably wouldn’t leave the couch for a week, right? While eating cheeseburger after cheeseburger, of course.

Meet Heather Anderson. It should be said right away that Anderson is not your typical backpacker. On Sept. 24, 2015, she set the self-supported speed record for hiking along the AT from Maine to Georgia: 54 days, 7 hours and 48 minutes. Two years earlier, she set a record on the Pacific Crest Trail, a 2,650-mile path that runs between Mexico and Canada along some of the most unforgiving terrain in the western United States.

So what did Anderson do after adding the AT record to her PCT record?

Two days after flying home to Seattle, she set off on a four-day climbing trip in the Glacier Peak Wilderness. Along the way, she and her boyfriend, Adam Walker, scrambled up seven mountains, three of them above 9,000 feet in elevation.

That type of schedule would seem extreme to even the hardiest of Northwest trekkers. But for Anderson, being in the mountains as much as physically and mentally possible is life’s main objective. And, as it turns out, there isn’t much that’s impossible for her.

Anderson doesn’t just hike. She also runs 100-mile ultramarathons and is roughly two-thirds of the way through climbing Washington’s 100 highest mountains, known as the Bulger List. It’s not uncommon for her to hike more than 20 miles in a day — with a full pack and significant elevation gain.

Rachel Brown, one of Anderson’s main climbing partners, calls it an “insatiable desire to be in the alpine.” Brown, who has also through-hiked the PCT and climbed her fair share of big mountains, is, like Anderson, comfortable with extra-long days and back-to-back climbs.

But after the pair summited Mount Hood — Oregon’s highest peak — this spring, Brown went on a short run to decompress. Anderson covered 36 miles.

“Therein lies a little bit of the difference,” Brown says. “Heather really does have this admirable level of determination and endurance that is difficult for me to conceptualize.”

FOR ALL HER superhuman feats, Anderson, 35, is very down to earth. She’s humble about her accomplishments without underselling them. She’s also matter-of-fact about her struggles.

Anderson, who goes by the nickname “Anish” on the trail and on social media, is not a natural-born alpinist. She grew up in rural Michigan, where her father was a factory worker, and her mother was a social worker. She was overweight as a teenager, and remembers dreading gym class.

“Exercise for exercise’s sake isn’t something that’s common where I grew up,” she says. “I didn’t have good paradigms for being healthy, and so I was unhealthy.”

But she still spent time outdoors, roaming the forest adjacent to her childhood home with her dog, and building forts. While attending Anderson College in Indiana, she took a summer job at Grand Canyon National Park. Her first day hike, at age 20, was in 120-degree heat, and she barely finished.

But she was hooked.

“After I had recovered for a couple of days, I was like, ‘Oh, that was actually the most incredible thing I’ve ever done, and I want to do that again,’ ” she says.

The day after graduating in 2003, Anderson set out on her first through hike: the Appalachian Trail. She completed the trail in four months, a changed person with a completely fresh perspective on what matters in life.

She went on to complete the Pacific Crest Trail and the Continental Divide Trail with a fellow through-hiker who eventually became her husband. They settled down in Bellingham, and Anderson got a desk job working at an electronic book-publishing company. But something was missing.

“I wasn’t happy, and I wasn’t sure why. This was a huge crisis for me,” she said in a recent TEDx talk.

Anderson and her husband divorced. She quit her job, and headed for the hills. In 2013, she set out to break the PCT unsupported speed record, hiking between 40 and 55 miles each day, alone, while carrying all her own food and gear and hiking into nearby towns to replenish her supplies.

Along the way, she faced all the physical and mental challenges that through-hikers confront, made all the more intense by her unprecedented pace. She ate while she hiked but struggled with nutrition. (She eventually discovered she is gluten-intolerant. Her favorite post-hike meal? A big fresh salad and glass of kombucha).

Because she often started hiking before dawn and continued well into the night, wildlife encounters were common. Along with snakes, bears and tarantulas, she crossed paths with four mountain lions, the last one perched above her on a switchback near Mount Hood. Her first reaction was to yell and lunge toward the animal. It bolted.

She reached Canada just before midnight on Aug. 7, 60 days, 17 hours and 12 minutes after she departed from Mexico. Her time crushed the previous record by nearly four days. The speed record has since been broken, but Anderson still holds the fastest self-supported time and the fastest overall time among women.

In 2015, she made history again, this time on the Appalachian Trail. She beat the previous self-supported record — set by Matt Kirk in 2013 — by more than four days.

When Anderson reached Georgia’s Springer Mountain — the southern terminus of the AT — she became the fastest person to finish self-supported hikes on both the PCT and the AT. But to her, the moment was completely personal.

I had to come here, to the AT, where my quest to find myself began 12 years ago and face those voices once and for all, alone.

I was to afraid to ask, but the trail knew the question in my heart: “Was the PCT a fluke?”

The AT answered with a resounding, “NO!”

I wrestled not against the trail or external forces, but with them. If it were easy the whispers of inadequacy would continue. Instead I was challenged every single minute.

FOR ANDERSON, HIKING is about much more than breaking records. Whether she’s on Tiger Mountain training for an upcoming ultra race or climbing up a Bulger peak in the North Cascades, her life’s objective is to maximize the amount of time she spends in the backcountry.

That goal is certainly relatable to many of our region’s “weekend warriors” — those of us who juggle full-time employment in the city with passions that take place elsewhere.

We show up for work on Monday, dehydrated and sunburned, our tired smiles revealing little hints of whatever adventure occupied our weekend. We sneak breaks in our cubicles to research next weekend’s climb or check the mountain forecast for the 15th time that day. We get through the week with tents, sleeping bags and jackets hung out to dry throughout our homes, only to pack them up four days later and do it all over again.

Constantly shifting between city life and the backcountry can be a rewarding, if exhausting, challenge. But many of us dream of a scenario where we don’t have to sit behind a desk every day, a lifestyle where we could hike and climb and ski to our hearts’ content without having to worry about mortgages or performance reviews or social obligations.

From an outsider’s view, Anderson appears to be living that dream. In the summertime, she spends 75 to 80 percent of her time outdoors, running, climbing and hiking. Walker, a serious climber who also is working on the Bulger List, joins Anderson on many of her hikes and climbs.

Her stamina has worn off on him. Before the couple started hiking together, Walker’s personal limit was around 18 miles a day. But after Anderson helped him adjust his footwear and technique, he now hikes up to 30 miles a day, carrying full packs and gaining significant elevation.

“She does have the most sustained stoke I’ve ever seen,” Walker said. “I’ve felt encouraged to go beyond what I’ve done before.”

In the offseason, Anderson travels south — sometimes to the desert southwest, sometimes overseas — and continues spending a majority of her time outside.

She lives a very frugal existence and supports herself by working as an online personal trainer and by taking advantage of samples and discounts from gear sponsors. When she and Walker aren’t camping out of their car or on the side of a forest-service road, they’re living in an Edmonds apartment owned by his family.

Home, Anderson explains, is in the mountains. She’ll return to civilization for a few days to do laundry, prepare meals and check in with her clients, but her heart belongs in the alpine.

When she is in the mountains, Anderson is the person who smiles even when it’s raining, the one who volunteers to carry group gear, the one who always wants to keep going.

“You can just see it in her face when she’s out there,” Brown says. “It’s pure joy.”

MERELY COMPLETING the PCT or AT is a lifetime’s achievement for many people. For the woman who holds records on both, the question is: Where does she go from here?

Lately, the answer has been “up.” The Bulger List occupied much of Anderson’s time this summer, and she checked off several of the most hard-to-reach and challenging peaks, including Buck Mountain and Dark Peak.

That’s not to say everything she does ends in success. She had to turn back on a May summit attempt of Sherpa Peak due to hazardous snow conditions on the upper mountain.

And earlier this year, Anderson failed in her third attempt to complete the Barkley Marathons, an unmarked run that consists of five 20-mile loops through the woods in eastern Tennessee. That’s not exactly surprising. The race is so tough, its tagline is, “where dreams go to die.” A 2015 documentary about it is titled “The Barkley Marathons: the Race that Eats its Young.” Only 14 of 1,000 runners have finished since it began in 1986.

Many people believe Anderson can be the first woman to complete the course. It makes sense: The things that make the race so difficult — nearly 60,000 feet of elevation gain, having to find one’s own way, running through the night — are the kinds of obstacles she had to repeatedly overcome on the PCT and AT.

But being the first to do something isn’t a worthwhile goal for Anderson. She has to decide she wants to succeed for herself, not to meet others’ expectations. At this point, the challenge is almost entirely mental.