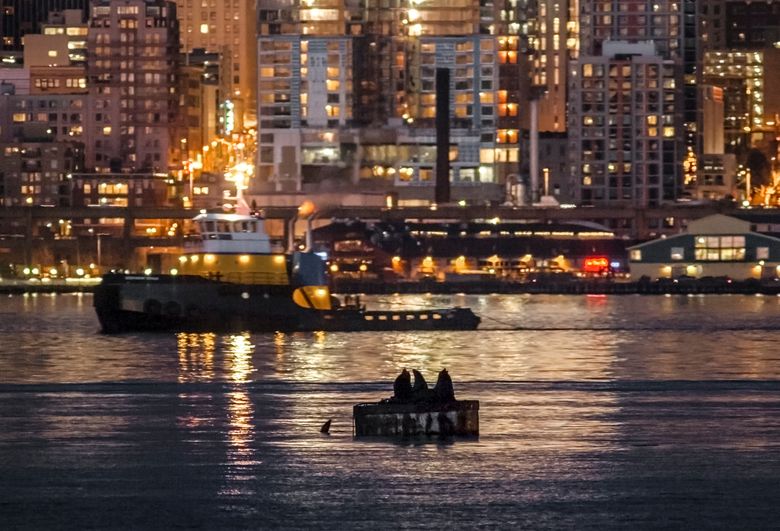 Sea lions frolic at the mouth of the Duwamish, where the river flows past downtown Seattle into Elliott Bay. (Tom Reese)

There’s a lot left to save. A new book offers hope about cleaning up Seattle’s only river. Here’s an excerpt from “Once & Future River: Reclaiming the Duwamish.”

By
Tom Reese
Special to The Seattle Times

Editor’s note: The following is taken from the book “Once & Future River: Reclaiming the Duwamish,” photographs by Tom Reese, essay by Eric Wagner. (University of Washington Press, $39.95).

Through photographs and words, “Once & Future River: Reclaiming the Duwamish” explores the complicated relationship between Seattleites and their only river. Central to the indigenous settlement that preceded the city, the Duwamish also was critical to Seattle’s founding and growth, but it has paid a steep price. Straightened, filled with trash and toxins, and generally neglected by those who benefited from it the most, the river was declared a Superfund site in 2001.

Tom Reese is an independent photographer and editor.

Long before then, however, some Seattleites were already trying to reclaim their river, and for almost 20 years, Tom Reese has documented the river landscape and the people engaged with this important place. His images bring forward what might seem like contradictions: a seal surfacing near an active sewage pipe, a family playing at a park adjacent to a barge loaded with scrap metal, a salmon swimming past a sunken tire. His attentive study offers a way not to turn away from this river, but rather to learn to understand the changed beauty of the Duwamish and the possibilities for its future.

All land, no matter what has happened to it, has over it a grace, an absolutely persistent beauty.

THERE ARE NO photographs of the Duwamish River at its most sublime. That was too long ago.

As modern people, though, we believe what we see.

I have been acquainted with this damaged place for more than 20 years, and what I see compels me to photograph with both affection and desperation. There is abundant loss and disconnection to be found, yet every time I settle into a kayak or wading boots and push off and away from the city’s hard ground, into the flow of the Duwamish River, it feels like belonging.

Revelations from this landscape can seem both true and implausible. That just can’t be right.

Can’t be right — the mind struggles to make sense of ambiguities and contradictions to be found everywhere. A Superfund site is beautiful at sunrise. Harbor seals with puppy eyes eat a stew of hidden dangers.

Can’t be right — the spirit stings from bearing witness to injustices, to be found everywhere. A waterfront park features crumbling concrete, suspicious mud, clanging machinery. Fellow humans are disconnected and disenfranchised in their own community.

TO ACCEPT THE evidence of injurious human choices that have been made during the past hundred years is to wonder what those people were thinking and whether we are much different. But to accept the evidence that wildlife and plants and people are at home on the river these days is to allow ourselves wonderment.

The Duwamish still is a liminal place, never settling for long. It has been transforming since volcanoes and glaciers and water flowed into the land. In its present state, it embodies the tensions between man-made and natural, between competing visions for the future, between dying and living.

| Elwha: Roaring back to life |

Though not everyone concurs, I find hope in the possibility that we can also transform, that by looking deeper instead of looking away, we can continue evolving in ways that help the river heal and reach its next full potential, whatever that might be. I am grateful to have been shown reasons for this optimism: Caring work has already improved habitat and health; attitudes about how we make use of the place in which we live seem to be progressing, within individual people and at least in pronouncements of some influential institutions; large-scale cleanup is beginning; and the river seems to have a life force that people can sense, resilient and defiant.

The Duwamish also informs our subconscious desire for connection and our intensifying undercurrent of worry. It can transport us to places within and beyond our own lives, reminding us what is precious, asking for our devotion.

We have put ourselves in charge of Earth and have choices to make. What are our obligations and opportunities? As we struggle to find our place as humans in a fragile world, my wish is that we will renew a relationship we recognize deep within from long ago: We don’t really want to separate ourselves from other parts of the natural world, even the neglected ones. We want to embrace all of it. We want it to embrace us.

Reclaiming the Duwamish River is about reclaiming ourselves. There is a lot left to save.

Tom Reese is an independent photographer and editor.
Advertising