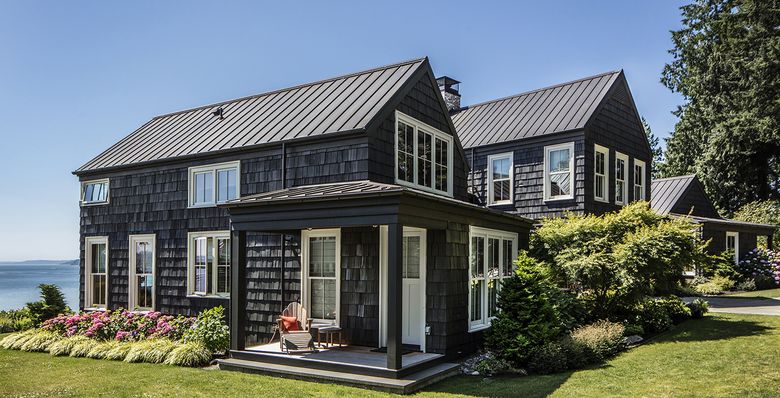 All the bedrooms have a connection to the outdoors, says project architect Tori Masterson. From this corner one, with a door to its own patio, “We sat here and watched my dad’s childhood friend marry under the big oak tree (next door),” homeowner Jeanie Ketcham says. (Steve Ringman/The Seattle Times)

After a fire destroyed the retreat her great-grandparents built, a Bainbridge Island woman’s new home aims to re-create the feelings it held.

ON ITS OWN, “history” implies mementos, milestones, heirlooms. But put “family” first, and suddenly it suggests cherished connections: the togetherness you all treasure, the experiences you all share, the backstory you all know by heart.

“In the late 1800s, a small group of Seattle men who shared a love of sailing Puget Sound and its islands ‘discovered’ Restoration Point,” she says. Entranced (understandably), they bought 5 acres. Next came one big, simple weekend cabin, with separate bunkrooms for the wives and children. By 1900, each family had its own little cottage, dotting the spectacularly scenic bluff facing Mount Rainier. “My great-grandparents’ rambling cottage grew quickly to accommodate their five children,” Ketcham says.

A happy medium in Washington Park

This Queen Anne remodel is incredibly thoughtful on many levels, including a new one

Four generations of family gathered there for summers and for vacations — 12 or more cousins at once, plus extended family, aunts, uncles and dogs, all overlapping to celebrate her grandmother’s Aug. 1 birthday. “During the Depression, my dad’s family lived here,” Ketcham says. “It got so cold, Dad and his two brothers would dress in their beds on winter mornings to keep warm. Several other families moved here to live full-time then.”

As the home expanded, so did the family photo collection: Teenagers dangle their legs off wide planks that served as a clifftop deck. An amazingly adorable toddler plops on a step with an open book, and the world’s sweetest smile. Different rooms were painted different colors — the green room had wicker; the blue a flowered theme — and there was so much wood, everywhere, “In the summer, you could smell the warming of the wood and the saltwater,” Ketcham says.

In February 2012, two of Ketcham’s three grown children, her daughter’s fiancé and another young couple were sleeping there when a violent fire ripped through the home. The fire chief declared it a total loss, and structurally, that was accurate. Ketcham’s family, though, was blessedly intact — and determined to rebuild.

“That was my responsibility, my job,” Ketcham says. “The house was given to me by my father. I was in a position to rebuild ‘the big house’ so it could again be a family generational home.”

She couldn’t re-create the historic home, of course — nothing remained but a pair of andirons, a thick slab of wood and tiny bits of teacups dotting the foundation — but she could, and did, articulate exactly how it felt.

Her longtime architectural ally, Steve Hoedemaker, of Hoedemaker Pfeiffer, along with builder Schultz Miller, captured those feelings brilliantly in a brand-new retreat that’s at once reminiscent, and forward-looking.

“The loss of the family home, their soul home, was really emotionally charged,” says Hoedemaker. “Building a new house was difficult, emotional, challenging: to avenge that loss and create a new stage for family, life, love, memories and history.”

In the translation of old to new, key words emerged: Charming. Playful. Maybe a little haphazard.

Hoedemaker understood. “The overall form is a collection of smaller vernacular forms that could have been built over time, each space maximizing light and views,” he says. “The house that was there had a sense of something that’d been built over time, in stages, and then added on, so we worked to re-create something with a rambling quality.”

That starts right inside the entry, with subdued natural wood, generous window seats (and windows) and “lots of ways in and out,” says project architect Tori Masterson. “You have to explore and discover the view when you walk in.”

And that stunningly detailed staircase straight ahead (which holds a hide-and-seek hidy-hole) feels awkward on purpose, Hoedemaker says: When you get to the top, it keeps stepping in two opposite directions. “I really wanted to create something that felt not as tidy and perfect as a staircase that somebody does from bottom to top: a sense of childlike discovery you get in a funky, rambling house.”

Elsewhere, resonant elements were re-created in a contemporary new light: The living room is in the same location, still anchored by an impressive brick fireplace, but now with a puzzle table, two sitting areas and lots more flexibility. There’s still a sleeping porch, but it evolved from total outdoor exposure to a wood-filled room with walls of accordion windows. Dishes and china displayed in the dining room recall an elaborate collection of Willow Ware and glasses that melted in the fire. And a cozy sunken sitting room, one of several intentional level changes, facilitates a familiar sense of togetherness — and a knockout view — from the updated kitchen.

“That part of the house as much as any references the old house, for as big as the house was, the family really lived in the kitchen,” Hoedemaker says. “What we wanted was both that reference and a sense that even though the house may accommodate 20 for dinner, sometimes only two people are there.”

Like the allover wood, and a family’s history, “Woven throughout the house is a sense of gathering,” Hoedemaker says: a thoughtful collection of small and large spaces, and connections.