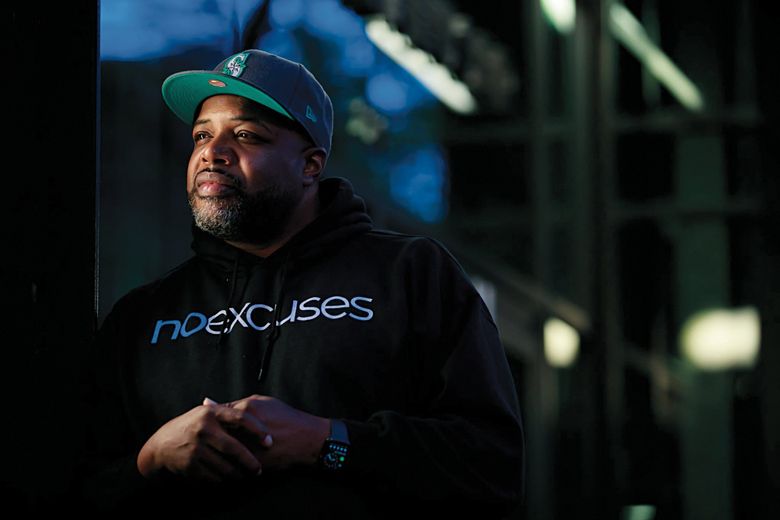 “I’m a regular kid from Garfield, from the Central District, that has been around the world countless times, and I’m just trying to pay it forward,” says Omari Salisbury, photographed in Seattle’s Pioneer Square neighborhood. (Erika Schultz / The Seattle Times)
By
Sandy Deneau Dunham
Pacific NW magazine associate editor

Here we are at the end of 2021, yet another year overshadowed by the same menacing pandemic, and still somehow, like those last, briefest, darkest days just before winter solstice — like right now — the anticipation of even a flicker of “you might just make it” light encourages us onward. Or maybe that’s just me. Either way, what’s universally striking about this year’s special Postscripts issue (where we catch up with just a handful of the thousand points of light we’ve met in the magazine) is a sparkling thread of inspiring resilience. The continued success of Omari Salisbury and Converge Media. The enduring determination of one of our old-growth forests’ fiercest allies. The hard-fought completion of a hand-crafted houseboat (also overshadowed by COVID-19). All in all, it’s a year-ending tribute to one-of-a-kind Pacific Northwest people and places — and, OK: We did throw in a “Chicken from Hell.” It can’t hurt to go into 2022 with a smile.

↓ SCROLL DOWN FOR MORE ↓

Postscripts 2021: Omari Salisbury and Converge Media are still ‘the little engine that could’

All in all, things continue to go well for Converge, but Salisbury isn’t taking any of it for granted — while he’s here, he says he wants to create as much opportunity for others as possible. “I don’t know how long this door will be open,” he says.

Remembering Tom Keogh — and his unforgettable legacy and impact

Tom Keogh contributed nearly 1,500 stories to The Seattle Times in two decades as a freelancer, including two wonderful Pacific NW magazine cover pieces in 2021. After suffering a heart attack, he died at his Edmonds home on Sept. 28, at age 68.

Postscripts 2021: How a creepy ‘Chicken from Hell’ clawed its way into the Burke Museum’s menagerie

Since our January cover story on the Burke Museum’s astounding collection of artifacts, the collection has grown — and so has the astonishment factor — with the addition of bones from Anzu wyliei, or the “Chicken from Hell.”

Postscripts 2021: Jerry Franklin is still standing up and speaking out for our old-growth forests

Since we profiled Jerry Franklin, one of the world’s premier authorities on old-growth forest ecosystems, the 84-year-old has continued to fight for big old trees, including against the Smuggler Timber sale and the Crush timber sale.

Postscripts 2021: a year of ‘Now & Then’ preservation wins and losses

While two “Now & Then”-related preservation wins emerged in 2021 (the landmarking of the La Quinta Apartments and the protection of views from Ursula Judkins Park), the former East Seattle School was lost to development.

After the July 25 edition of Now & Then showcased two color pictures of Jimi Hendrix’s last Seattle appearance, reader Scott Wyatt shared a stunning black-and-white photo he had taken at the concert.

Postscripts 2021: ‘A Collection of My Favorite Things to Cook’ hits the right notes with Tom Stockley fans

Paige Stockley says she and her sister, Dina Moreno, have been thrilled by the reaction to the publication of their father Tom Stockley’s journal of recipes. People they didn’t know wrote to Paige and Dina, telling them how much the book meant to them.

Postscripts 2021: The craftsmen of Haggard Houseboats ran into rough waters on their way to completing Real Quiet

After the pandemic delayed the completion of their newest project, the craftsmen behind Seattle’s Haggard Houseboats ran into even rougher waters: They both contracted COVID-19.

Since we first met naval architect Kurt Hughes and his livable lunar lander in Central Washington in 2017, Hughes has become somewhat of a star himself — and his amazing DIY project is finally finished.

Sandy Deneau Dunham writes about architecture and design for Pacific NW and is associate editor of the magazine. Reach her at sdunham@seattletimes.com.