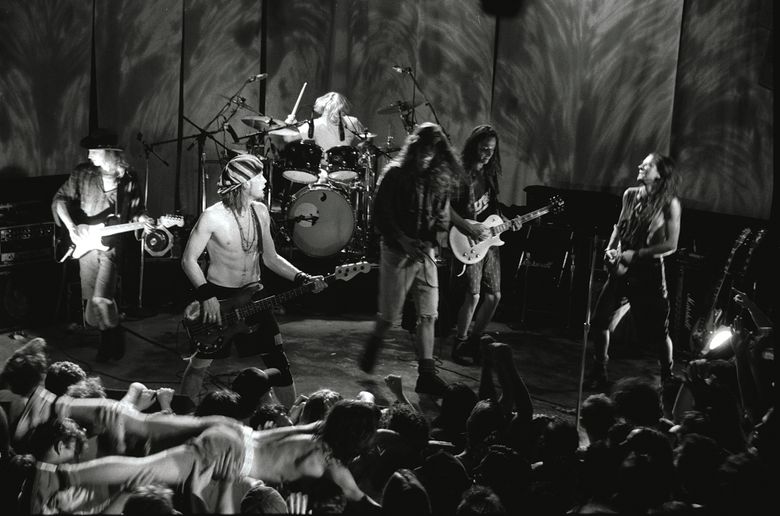 At the end of this memorable show at RKCNDY on Aug. 3, 1991, Pearl Jam was joined by Soundgarden’s Chris Cornell, center, and drummer Matt Cameron, for a short Temple of the Dog set. Earlier in the show, the Pearl Jam song “Alive” was filmed for a video. (Lance Mercer / 1991)

Pearl Jam will be inducted into the Rock & Roll Hall of Fame on Friday. If you’ve ever wondered where the band recorded “Ten,” where it rehearsed or where it played its first show, wonder no more. It’s all here.

By
Bill Reader
The Seattle Times

There’s no more hanging out at the Oxford Tavern, or the OK Hotel.

Members of Pearl Jam were frequent visitors to KISW, which abandoned its old radio station on Aurora Avenue in 1999.

The Phantom dance club, where the band held its record-release party for “Ten,” on Aug. 23, 1991, after playing a show at the Mural Amphitheatre, is a boarded-up, abandoned building across from the Museum of Pop Culture.

But some of the venues remain.

London Bridge Studio, built in 1985, still stands in Shoreline. And it’s still one of the best recording studios in the area. Pearl Jam recorded “Ten” there, and Alice in Chains, Soundgarden and many others have recorded at the studio.

The late Rick Parashar, who built the studio with his brother, Raj, was the producer on “Ten.” The studio is owned now by producers Jonathan Plum, Geoff Ott and Eric Lilavois. Plum and Ott worked at the studio in the ’90s.

Plum, who has worked with Pearl Jam in the studio (but not on “Ten”) says musicians who record there now can sense the history in the spacious building.

Lilavois, who has seen Pearl Jam more than 50 times, agrees.

“It affects people,” he says. “There’s an energy shift.”

On Sunday, in Pacific NW magazine, we took a look at Pearl Jam’s first year. Now, we list 10 Seattle-area venues that played a role in Pearl Jam’s early success, along with current photos of the locations:

Location: 2316 Second Ave., in an alley between Second and Third avenues and Bell and Battery streets.

Then: This was Mookie Blaylock/Pearl Jam’s first rehearsal room. It was referred to as the Galleria Potatohead space, but more accurately could have been called the Black Dog Forge space. Galleria Potatohead was an artists’ exhibit area, facing Second Avenue. On the back side, opening to the alley, was an ironworks shop run by Louie Raffloer and Mary Gioia. It was through their alley door and down a set of steps you’d find a practice space, crammed with equipment, about 30 feet by 30 feet.

Now: The basement is still used by local bands. Louie and Mary are still creating beautiful ironworks upstairs. And Pearl Jam fans from around the world still stop by to gawk at the place where it all started.

The Off Ramp Cafe

Then: This was the site of Pearl Jam’s first concert, as Mookie Blaylock, on Oct. 22, 1990. About 200 people showed up to watch the unadvertised show.

Now: The Off Ramp closed in 1999. It reopened under other names, and has been known as El Corazon for 12 years. El Corazon and its sister club next door, The Funhouse, host live music most nights.

Then: One of Mookie Blaylock’s first shows was at the Moore, on Dec. 22, 1990, opening for Alice in Chains. Later, in January 1992, Pearl Jam recorded its epic “Even Flow” video at the Moore.

Now: The Moore, which opened in 1907, is Seattle’s oldest operating theater. It still books plenty of music acts. Ann Wilson played the Moore in March, and Reggie Watts, the New Pornographers and Kansas are scheduled this month.


Then: This state-of-the-art (and out-of-the-way) studio north of Seattle is where Pearl Jam recorded “Ten.” Most of the recording was done in March and April 1991, but the band never topped the take of “Alive” captured here in late January, when it was still Mookie Blaylock. That version is the one on the album. Alice in Chains, Mother Love Bone and Temple of the Dog also recorded here.Now: Rick Parashar, who died in 2014 at age 50, was the producer on “Ten.” The studio is owned by Jonathan Plum, Geoff Ott and Eric Lilavois, who continue to operate it, recording musicians big and small. Plum and Ott each worked for Parashar in the 1990s. Studio tours are highly recommended.

Then: Jeff Ament, Stone Gossard and Eddie Vedder — who were frequent visitors to the station — told Damon Stewart on his March 10, 1991, “New Music Hour” show they were dropping the band name Mookie Blaylock and changing it to Pearl Jam.

Now: KISW moved out in 1999, followed in the building by Fulcrum Technologies. Fulcrum moved to a new Seattle location last fall, and some of the doors and windows at the Aurora Avenue building are covered with plywood. KISW, which broadcasts now from its studio on Olive Way, still has a relationship with the band, donating money from its “Pain in the Grass” concerts to Pearl Jam’s Vitalogy Foundation.


Then: This is where the cafe scene in the movie “Singles” was filmed. In the movie, shot in spring 1991, Eddie Vedder, Jeff Ament and Stone Gossard play members of the band Citizen Dick, whose lead singer was Matt Dillon. This club, in the shadow of the Viaduct, hosted many Seattle bands, including Ament and Gossard’s pre-Pearl Jam group, Mother Love Bone.Now: The nightclub closed after the building was damaged by the 2001 Nisqually earthquake. It’s an apartment building, still known as the OK Hotel.

Then: Pearl Jam played a handful of important 1991 shows at RKCNDY, which was just around the corner from the Off Ramp Cafe. On May 25, the band played at a wrap party for the movie “Singles.” It was drummer Dave Krusen’s final show with Pearl Jam. On Aug. 3, the video for the song “Alive” was filmed here, during a live performance.

Then: Pearl Jam’s last concert before “Ten” was released was played in front of 4,000 fans Aug. 23, 1991, on the Mural Amphitheatre stage. It was the band’s first show with new drummer Dave Abbruzzese.

Now: The amphitheatre with the colorful backdrop is still there, hosting performers during Bumbershoot, Folklife, the KEXP outdoor concert series and other events.

Then: Pearl Jam held its record release party for “Ten” here on Aug. 23, 1991. Four days later, the album was released.

Now: It’s still standing, across the street from the Museum of Pop Culture, but it’s boarded up and in a state of disrepair. The club has gone by many names after Phantom, including (but not limited to) Tropix Cafe, Polly Esther’s, Element, Level 5, Diamond International Club and iMusic.

Bill Reader is editor of Pacific NW magazine. Reach him at breader@seattletimes.com.
Advertising