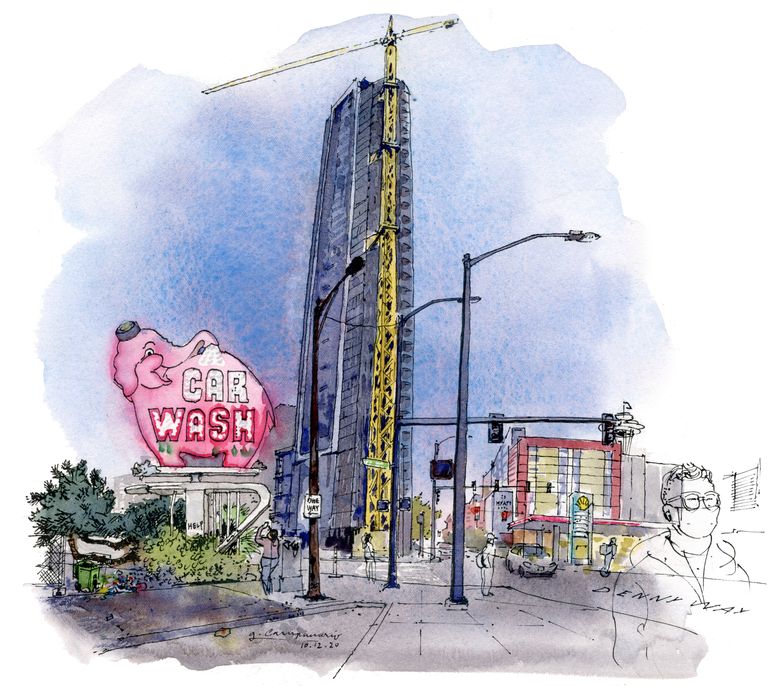 It doesn’t spin all the way around anymore. It just nudges back and forth with the wind. As dusk begins to set in, I notice that half of its neon tubes are dark. But the day is still light enough to see trash strewn all over, and the poignant word tagged on its pedestal: “HELP.”

The beloved 1956 billboard, designed by “queen of neon” Bea Haverfield, holds a special place in the heart of new and longtime Seattle residents. When the news of the car-wash site demolition broke in early October, you could almost hear the collective sigh: Not the elephant!

While the neighborhood preservation group Friends of Historic Belltown has asked the city to landmark the elephant sign, at press time, its owner planned to donate it to the Museum of History & Industry (MOHAI) — which already has set up a page to collect funds for its restoration. Can you imagine walking or driving by this spot without seeing that elephant’s happy face?

“I don’t consider myself to be much into nostalgia, but this is one of the only few things in Seattle that hearkens back to a different era,” says a passerby who stops to chat while I draw. “I haven’t even lived here that long. I’m going to miss it.”

“It’s iconic, like the Space Needle,” says another person coming to say her goodbyes. “It’s been here forever. I remember it since I was 3, and I’m 58.”

Looking west from the corner of Denny Way and the old stretch of Aurora Avenue that has been renamed Borealis Avenue, a 40-story condominium tower now dominates the Pink Elephant’s old turf.