I NEVER HAD the slightest urge to run off the edge of a cliff and fly. So when paragliding pilot and instructor Peter Stark texted me and said he had a cancellation and we could go up the next day, I thought he meant he was free for an interview. “That’s great,” I wrote back. “I’ll meet you at Samish Overlook,” a beautiful spot south of Bellingham with stunning views of the San Juan Islands. 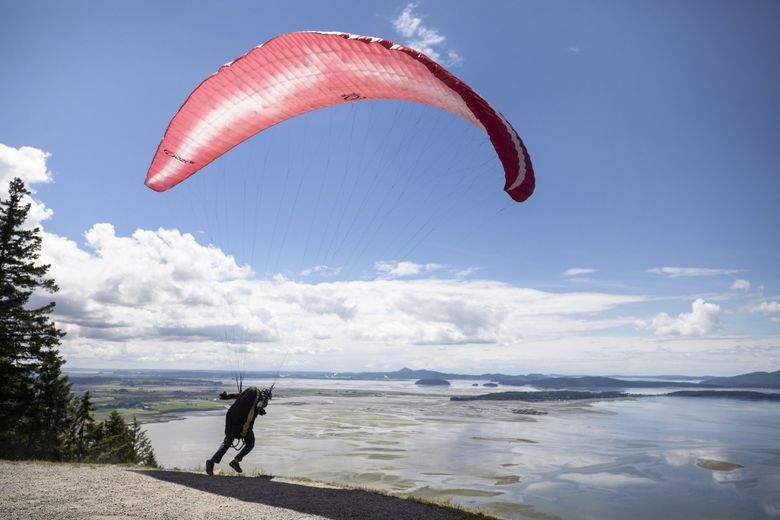 Suspended by only a wing and the air, glider pilots soar from Samish Overlook

It wasn’t until Stark wrote back and explained what I should wear — ankle-supporting boots, a light windbreaker, nothing in my pockets — that it dawned on me: I was agreeing to more than just an interview.

This realization led to a series of decisions that ended with me standing on top of a 1,200-foot mountain on the southern edge of Chuckanut Ridge staring across a short, grassy slope that dropped off into nothing. I stood directly in front of Stark, clicked into a harness that attached us both to a 30-foot nylon wing spread across the gravel behind us. Stark was giving me instructions, but all I heard in my head was, “Oh, my God. Oh, my God.”

Stark broke it down into terms that even someone in mild shock could understand. He pointed toward an island in the middle distance.

“You’re going to run toward the right side of that island,” he said. “What island is that?”

“Guemes,” I said. (It actually was Samish Island.)

“Right. You’re going to run toward Guemes, and you’re going to keep running even after your feet come off the ground. Do you understand?”

So, those were my directions — two commands: “Run” and “Stop.” Easy-peasy. No problem.

Then Stark was yelling, and I was running. “Run, run, run,” he said, as the unexpected pull of the massive, air-filled wing sent me careening sideways toward my wife, Maria McLeod, who was below us and seemingly out of the way, filming our takeoff.

We clipped her just as we became airborne. I kept churning my legs until Stark told me I could stop.

Then we were aloft. The peacefulness of being in the air without the sound of a motor is hard to describe. I felt somehow disembodied, like the gravity that had held me Earthbound for 54 years finally had released, allowing me to glide above the treetops. “Wow,” I said. “Wow.”

Stephen S. Howie is a nonfiction author and multimedia journalist who lives in Bellingham and teaches in the Department of Journalism at Western Washington University. He has written and published books about civil rights and cancer prevention, as well as producing short documentaries on social justice and masculinity. To see and read examples of his work, visit his website at stephenshowie.com. Steve Ringman is a Seattle Times staff photographer: sringman@seattletimes.com.