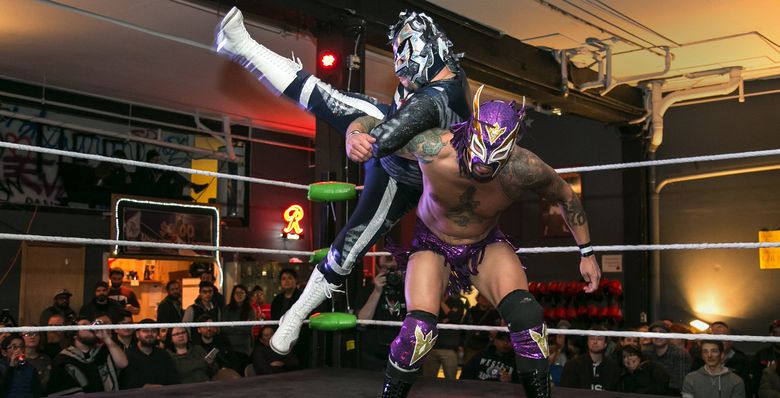 Acrobatic, dramatic wrestlers square off at Lucha Libre Volcánica, the Pacific Northwest’s first and only school for Mexican-style wrestling, which brings sizzle and color to a city that could use more of it.

GUERRERO de NEON stands calmly behind the red curtains, listening as the announcer calls his name in a booming voice that sounds like a rocket taking off: “From the City of Lights, weighing in at 240 pounds, Guerrerrrroooo deeeee Neeeeon!”

Speakers pump out hip-hop at an earsplitting level as Neon parts the curtains and steps into the dimly lit gym in Seattle’s South Lake Union neighborhood, home to Lucha Libre Volcánica, the Pacific Northwest’s first and only school for Mexican-style wrestling.

Lucha libre is known for oversized personalities in undersized Spandex, and for colorful masks that evoke an innocent’s idea of a nightmare — or a superhero. Call it macho glam. Or glamorous machismo. Whatever you call it, tonight’s contestants do not disappoint.

Neon bows deeply, spinning his hands theatrically before an audience that, in some cases, has traveled more than an hour on a Saturday night to watch 14 wrestlers compete in five matches that will pit good against evil.

Neon, it must be said, is one of the bad guys — a rudo. He’s also a relative newcomer to a sport so beloved in Mexico that it’s second in popularity only to soccer.

Colored lights pulse at Evolv Fitness, illuminating the mask Neon has painted on his face after losing his custom-made one in a previous match that created a bit of bad blood. He thought of quitting after that one; losing a mask to a competitor means losing your honor, and the right to wear that mask again. But it’s hard to give up a childhood dream, especially when you’re only 19.

Neon’s turquoise-colored Spandex and eye-popping pants lend credence to his name, which, in English, translates to “Neon Warrior.” He stalks around the wrestling ring, high-fiving the crowd before slowly logrolling inside. There, he and a teammate take on the wan Milky Burrado and burly El Chicano, a San Diego native who comes with his own cheering squad.

Aside from a smattering of white hipsters who light up a back row with their incessant texting, tonight’s audience is mostly Latino. They’re riled and ready to root for their favorite técnicos — the good guys — and they harshly boo the rudos as the two sides fling each other around the ring.

The crowd screams as the masked wrestlers leap, roll, jump and fall on each other in acrobatic choreography that is as loud as it is thrilling. Also a little risky. When the bout ends after 15 exhausting minutes, Neon is lying on the ring’s padded mat, writhing and cradling his right arm. Is it real? Will he be able to wrestle in the semifinal?

His mom, sitting in the front row, doesn’t seem too concerned. When we talk a few days later, Neon says the real strains weren’t apparent until about two days later. He shrugs them off. It’s part of being a luchador.

Like 80 percent of the students and professional wrestlers at Lucha Libre Volcánica, Neon isn’t Mexican. But he has embraced a sport that was gloriously birthed in Mexico, and cannot be separated from it. His passion for it is helping keep Mexican culture alive in one of the most Caucasian cities in America. It also brings sizzle and color to a pretty bland Seattle neighborhood, and to a city that, frankly, could use more of it.

The 53-year-old, dressed in a sleeveless black T-shirt with his nickname, “Profesor,” on the back, had been keeping up the grueling pace with nine of the 25 wrestlers under his tutelage who are here this day. But then came the burpees — a cruel mash-up of jumping jacks and pushups — and Gómez suddenly was looking forward to an interview.

“I’m old,’’ he says, which you take as a joke, because you’ve watched him in the wrestling ring, taking on athletes 30 years his junior with as much effort as he expends crossing his ankles.

Gómez steps away from the acrid air in the gym while his students finish an hourlong warm-up, and then line up in the elevated wrestling ring for another 90 minutes of training drills that turn the room into a rolling thunderstorm.

BOOM! A wrestler lands on her back. BOOM! BOOM! Someone just got bounced off the ropes and clotheslined, which is exactly what it sounds like.

BOOM! BOOM! BOOM! The wrestlers jump, roll and vault over each other in a line. The room is freezing, but sweat is pouring off them.

Gómez climbs into the ring with his students, calling out moves in Spanish and instructing them on the fine points of falling, rolling and leaping from the ground and from the ropes. Not for nothing is the sport called “free flight.” If someone gets a move wrong, Gómez makes the student redo it until he or she earns an approving nod.

“I’m strict,’’ he says, without a hint of apology.

Toward the end of the 2½-hour training, the wrestlers gather in the middle of the ring with arms linked. A young man with close-cropped blond hair offers a prayer: “May we all stay safe, unharmed. Great show, fans. May Chris, who is still in Korea, come back. My ankle stop throbbing. All of us are awesome.” Everyone says, “Amen.”

“They’re a loving group. They come up and say, ‘I love you, Profe.’ They kiss me here,’’ says Gómez, placing his pointer finger on the middle of his right cheek. “They hug me. I say, ‘I love you, too, guys.’ We’re a family.”

If he has a favorite, he’s not telling.

Gómez wrestled professionally in his hometown of Mexico City for more than 25 years, but left it behind 19 years ago when he moved to Renton to join his sister and work in construction.

He’s a U.S. citizen now, and a maintenance supervisor with a wife and a grown son. Still, it was hard to leave behind a sport he fell in love with the first time he tried it at age 14.

So when Gómez wandered into a gym in Renton seven years ago, his eyes jumped to the professional boxing ring. He consulted with the gym owner, and was soon training his then-teenage son and nephew in the art of lucha libre.

The workouts drew others who were curious about the sport, and soon Gómez was running a school. A few years ago, a local bank included the school in a commercial, and the circle of students widened.

Gómez now has about 25 students who train regularly with him, some as many as four times a week. When the students are ready, they also perform monthly in matches at Evolv. Gómez usually wrestles during those performances under the name Peligro, which translates to “Danger” in English.

Most luchadores never show their faces or reveal their real identities, preferring an air of mystery so people will invest in their characters instead of the backstory. But Gómez, as the founder and face of the school, uses both. What his students choose is up to them.

AS ECONOMICS GO, the enterprise has been largely an unprofitable one, says Gómez. Under current state law, it’s considered a “combat sport,” similar to boxing and mixed martial arts. As such, a promoter license is required, and promoters must pay licensing fees and event costs that include paramedics and an ambulance on standby.

But that will change next month. After several tries, the state Legislature has created a new category for “theatrical wrestling” to provide lucha wrestlers and their troupes a better chance of making a profit.

Gómez says lucha has more in common with circus arts than combat sports. The moves are acrobatic and dramatic, but they’re practiced over years, and the wrestlers rely on a common language to keep from getting hurt. There’s more danger, he says, in soccer.

The Volcánica wrestlers make the most of things, selling merchandise, photos and other kitsch to cover expenses. And they work regular jobs, and pick up gigs in other genres of wrestling. Some wrestle in 3-2-1 events at Evolv.

“The sport,’’ says Gómez, “is not for everyone. It’s only for the people who love it.”

THAT WOULD INCLUDE Avispa, a white, 24-year-old certified personal trainer who fell in love with lucha during college, when she met a luchador through the University of Puget Sound’s circus club.

Luchadoras are not uncommon in Mexico. But Avispa — The Wasp — is the only female wrestler with Volcánica, and the only one in the Northwest.

She began training in 2011, made her professional debut in 2013 and now trains others in the art of lucha libre.

At matches, she is a crowd favorite. Little girls stand and applaud wildly during her matches. At a recent event, a middle-aged man was kicking back with a Styrofoam cup of corn salad until Avispa took to the ring. He nearly dropped the cup as he jumped to his feet to film her entire match.

When the match ended, he left.

Avispa says she was “a twig” before she began training in lucha. Now, she can throw wrestlers twice her size.

She enjoys the attention, she says, because, “You know I can kick your ass, and that’s why you’re watching.” It’s a fact, one she conveys with confidence, not braggadocio. Her ferocity is captured in her name: “A wasp is vicious and quick and scary as hell,’’ she says.

Like most of the wrestlers here, Avispa would love to make a living in lucha libre. But the economics aren’t there yet; personal training still pays her bills. Aside from the fitness, the payoff from lucha, she says, is the community she’s joined.

“It’s definitely a very familial atmosphere,’’ she says. “It was one of the first things I noticed. … I went to training and acquired a bunch of uncles and brothers.”

While most of the Volcánica luchadors have yet to make a living at it, a few do.

Sonico, an intense young Latino man of 19 years, travels through the Pacific Northwest as an “American-style” wrestler. He likes to thrill audiences by incorporating some of his lucha moves into the matches, and has traveled to compete in Mexico, where lucha is found in every big city and many small towns.

Having just finished practicing with the other luchadors at Evolv, Sonico’s chest and back are covered with welts from bouncing off the ropes and mats. He hadn’t even noticed.

“I’ve loved this stuff since I was a boy,’’ he says. “I knew immediately, like in preschool, that I wanted to be a wrestler.”

To make things work, he sells merchandise branded with a play on President Trump’s campaign slogan: “Make lucha great again.” He also works at a gym in Seattle, and as back-of-the-bar help.

Sonico credits his father, who grew up in Mexico, for his lucha name. His dad said, “Well, you’re from Seattle. And Seattle is known for the Sonics … ”

And maybe someday, it’ll be known for lucha, too.

Susan Kelleher can be reached at skelleher@seattletimes.com or 206-464-2508. On Twitter: @susankelleher.
Advertising