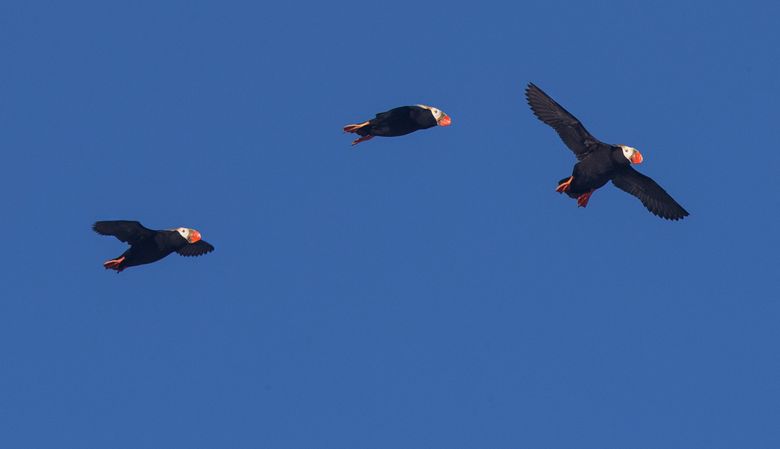 Tufted puffins put on a spectacular show at Haystack Rock, but are tough to see without high-powered equipment. (Mike Siegel/The Seattle Times)

It isn’t easy to spot the increasingly rare tufted puffin, but Haystack Rock is still a reliable site for a sighting of these flamboyant flyers.

TO SOME OF US, the tufted puffin is living, flying proof that Mother Nature — or whatever force causes creatures to evolve in garish plumages with inexplicable appendages — has a sense of humor. Go ahead: Look at one up close, and convince the person next to you it is not some odd result of crossbreeding a cormorant with a rodeo clown.

To others, they’re a thing of rare beauty — a striking amalgamation of color, charisma and ingenuity that serves as a jewel in the crown of many a northern Pacific Ocean seascape.

Whichever your preference, those placing a face-to-face encounter with Fratercula cirrhata (from the Latin for “little brother” or “little monk”) on their bucket list might want to get a move on: Places that afford those opportunities are shrinking every year, possibly as a result of climate change.

THE BACKSTORY: The story behind the puffins on Cannon Beach’s Haystack Rock

Nowhere is this more evident than the maritime climes of Washington and Oregon, where the squat, web-footed, stubby-winged-but-irresistible birds, who spend much of their lives at sea, make landfall to breed and lay a single egg in a rock-face burrow each spring.

Determined birders still can get a good look at puffins, which remain a popular tourist attraction at Cannon Beach, Oregon. But they’re getting difficult to find elsewhere as their numbers plummet — a phenomenon glaringly evident in the interior waters of the Salish Sea.

As recently as a single human generation ago, puffins were regularly seen poking their heads from nests in rocky crevices in Washington waters as near as the San Juan Islands. Now, they’ve become a rare sight even in the wilder Strait of Juan de Fuca. And their numbers at traditional, known nesting sites on the Pacific Coast — almost always on precipitous rock faces inaccessible to many predators — have shrunk dramatically, according to a 2014 study conducted for the Washington Department of Fish and Wildlife. Puffin surveys then showed that fewer than half of more than 40 “historically occupied” breeding sites were active.

THE TOTAL WASHINGTON population of tufted puffins, estimated as recently as 1984 at about 25,000, was believed to be as low as 3,000 birds in 2009 — an “order of magnitude population decline” averaging about 10 percent a year, according to Washington’s Department of Fish and Wildlife. The trend is mirrored by other surveys in Oregon, California and Japan. (They are not yet threatened with extinction. While numbers have plummeted along the contiguous U.S. Pacific Coast from California to Washington, populations are more stable in the birds’ northern range, including Alaska and Siberia. The 2014 state report successfully arguing for “endangered” status for the bird in Washington termed the puffin’s overall decline a clear “range contraction.”)

In Oregon, U.S. Fish and Wildlife researchers are poised to launch a transmitter study of the tufted puffin, hoping the ability to track some of Cannon Beach’s most famous summertime visitors will provide new insight into their life cycles. The hope is that new tracking data — financed partly through the sales of “Protect Our Puffins” sweatshirts on the Oregon Coast — will help bolster a case of endangered species listing of the bird in that state.

Puffins, a member of the auk family, use their stubby wings to propel as far as 200 feet down in the icy Pacific to chase their main prey — small forage fish. Change in fish populations, via natural variances or human overfishing, is the most likely reason for the decline in puffins and other seabirds with similar life cycles, scientists believe. Malnourished young puffins are often found on Northwest beaches.

The birds, the Washington study concluded, “are likely to continue declining in Washington,” and could essentially disappear from Northwest shores and waters within a few decades.

In addition to habitat changes, scientists also noted the relative fragility of the bird in the face of other factors, including a boom in predators such as bald eagles, and man-made environmental damage. A single event, the 1991 Tenyo Maru oil spill on Washington’s coast, killed as many as 10 percent of Washington’s tufted puffins, scientists believe.

The study issued a dire prediction of a “challenging environment” for the iconic birds. The birds’ future, at least in the Northwest, appears less than bright.

ALL THE MORE reason, perhaps, to get to a known puffin observation site before the birds, like many of their forebears, pull up stakes and head to the Arctic for good. Known puffin breeding sites in Washington are largely inaccessible; the birds thrive best in rocky offshore sea stacks and islands such as Tatoosh and Destruction, with little public access.

But as fate would have it, one popular Northwest tourist destination — Cannon Beach — remains home to one of the more-reliable summer puffin clans. There, the steep walls of iconic Haystack Rock are interrupted by the colorful vacationers every spring. Sighting them as “up close” as one can get — within reasonable viewing distance, via strong binoculars, long lenses or spotting scopes, from the beach — has become a popular pursuit, for some bordering on obsession.

Even here, the puffin’s numbers have plunged compared to historic levels. Once regularly the summer breeding haunt for some 600 birds, a 2007 count turned up only 51 survivors. Numbers have rebounded since, to more than 140 in recent years — an encouraging sign in a town where the creature has become an unofficial mascot.

Puffins begin arriving at the rock in April to lay their precious eggs, and when they hatch in mid- to late June, the birds are often seen coming and going as they head to sea to fish. Young puffins fledge in 45 to 50 days (usually in July), and once they’re full-grown, their parents leave them at Haystack and head west, back to the deep water. That leaves the young birds, with underdeveloped wings even in adulthood, with no choice but to take their first steps into life by literally jumping off a cliff, hoping to gain enough air speed for a soft landing.

PRIME VIEWING TIMES at Haystack — on clear days during morning low tides, when access to the rock is better — are early April to mid-May, and then late June through July, veteran watchers say. Puffin-watching fervor usually peaks — whether through holiday scheduling or actual bird activity is not clear — around the Fourth of July weekend and thereabouts.

Most of the birds congregate in the “grassy meadow” on the northern shoulder of the rock. Good binoculars are a must — puffins will look like insects to the naked eye — and spotting scopes are helpful. If you don’t have one, look for volunteers on the beach from the Haystack Rock Awareness Program, which often provides scopes and spotting tips throughout the summer. Schedules are available at the Cannon Beach Visitor Information Center.

Good luck. And whatever you do, don’t try to climb on the rock. It’s illegal, and your chances of surviving a plunge into the icy waters at its base are far less substantial than the bird’s, which, unlike some of its human fans, only looks like a clown.

Ron Judd is a Pacific NW magazine staff writer. Reach him at rjudd@seattletimes.com or 206-464-8280. On Twitter: @roncjudd.
Mike Siegel is a Seattle Times staff photographer.
Advertising