INSIDE A NONDESCRIPT garage in the Seattle area, pulled from boxes and artfully displayed on a couple of tables, exists a kind of time machine into the various eras of this region’s baseball history. At first glance, many of these materials are easily overlooked. Some of the artifacts, to the untrained eye, might even be disregarded as trash: newsprint so faded, it’s hardly even legible; ticket subs with frayed edges; a commemorative button for a stadium that hasn’t existed in four decades.

With the use of your imagination, and with the aid of a capable tour guide by the name of Charles Kapner, however, these are portkeys to a distant and fascinating past. 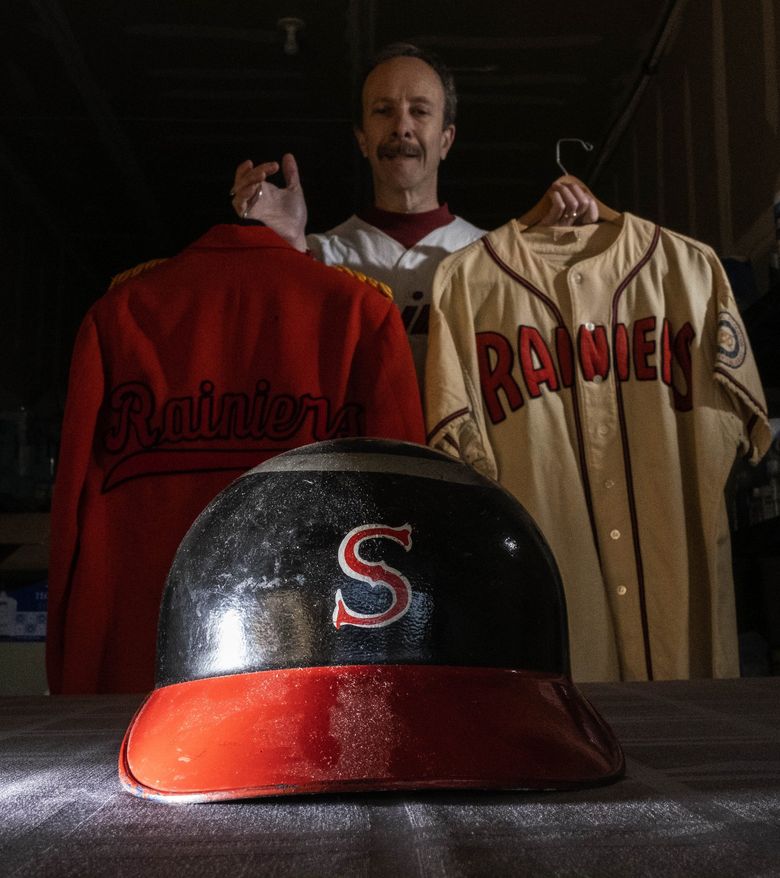 This is Kapner’s collection, the work of a lifetime. A baseball fan from the time he was a boy, he caught the memorabilia bug from a display at his elementary school featuring a range of 1963 Topps baseball cards.

“I already had the passion for the game and for collecting,” Kapner says. “But that, at a very early age, set me in a direction of: Someday I’m going to do what this guy did. Because I just thought it was so cool. I’d go stand there for 20 minutes, trying to look at every card through the glass. I was just enthralled, and I thought it was so inspiring.”

From that came all of this: boxes stuffed with artifacts from the Mariners all the way back to the earliest days of Seattle minor-league baseball. Kapner’s oldest artifact is a glass-encased card from the late 1800s. Our journey starts there.

That baseball card of Dan Dugdale
WHAT’S THE FIRST name that comes into your mind when you think about professional baseball in Seattle? Ken Griffey Jr.? Or maybe Alvin Davis, AKA Mr. Mariner? Jim Bouton, for the more literary-minded fans? The Mariners’ most recent Hall of Famer, Edgar Martinez?

But no: The man christened “The Father of Seattle Baseball” actually made his Major League Baseball debut more than a full century before Junior did. Dan Dugdale caught for the Kansas City Cowboys and Washington Senators during his brief playing days. Dugdale, a stout 5 feet 8, was plagued by questions about his nimbleness, and he struggled to establish himself in the major leagues. He would make a far greater impact as an executive.

Dugdale owned or managed several of Seattle’s earliest minor-league teams, and having amassed considerable wealth in the local real estate market, he also built two stadiums. That’s him in the top hat in the middle of an early 20th-century Seattle team photo. Kapner describes Dugdale as “statuesque in many ways,” and that feels about right.

The main baseball venue in town bore his name: Dugdale Park. The stadium, located at the intersection of Rainier Avenue and McClellan Street, was considered one of the finest of its time on the West Coast. It opened in 1913 and seated 15,000. It was constructed entirely of wood, which eventually became an issue: Dugdale Park burned down in 1932. This was an inglorious end to a park that had hosted baseball icons like Babe Ruth and Ty Cobb in exhibition games, plus multiple championship home teams. (In 1907, Dugdale built Yesler Way Park, which was informally known as “Dugdale Athletic Park.”)

The Father of Seattle Baseball himself also met a tragic fate, dying at the age of 69 in 1934 after being struck by a Seattle City Light truck.

They went 109-91, a truly staggering amount of games played in a season and what amounted to the best record in the league. One of the small joys of my journey back in time was digging out the statistics that would be utterly incomprehensible today. For example: Vean Gregg, a 39-year-old starting pitcher, went 25-11 that year, leading the team with 326 innings pitched. (By comparison, Justin Verlander led the major leagues in 2019 with 223 innings.)

The PCL title qualified the Indians for a berth in what was dubbed the Junior World Series, a showdown between the top teams from various minor leagues. Seattle took on St. Paul in what was supposed to be the best out of nine. St. Paul took the opener, 12-4, at Dugdale Park, and the weather was so wretched that October that they never played another of the scheduled games. It is heartening to discover that some things, at least, never change.

Various concession stand buttons and memorabilia from Sick’s Stadium
AFTER DUGDALE PARK burned down, the Indians relocated for a few seasons to Civic Field in what is now Seattle Center, long before the Space Needle was even a conception. Civic Field was a precursor to Memorial Stadium — the fact that an even older venue once sat on this site will likely be baffling to anybody who has been inside venerable, crumbly old Memorial anytime recently.

Sick’s Stadium (later called Sicks’ Seattle Stadium and Sicks’ Stadium) was built where Dugdale Park used to be, opening in 1938. It was named after Emil Sick, the owner of both the Rainier Brewing Company and the team he rebranded as the Rainiers. At the time, this might have come across as a semi-queasy bit of corporate commercialization, but all these decades later, the switch away from the Indians seems downright prescient.

These artifacts, representing a history considerably closer to the present, feel easier to wrap one’s head around. It’s either that or Kapner’s ability to paint a vivid visual picture of the first time he laid eyes upon the stadium as a boy in the mid-1960s.

“You go in on the main level, and it was a concrete surface that was really kind of dark,” Kapner says. “You go past the popcorn stand — and we always sat on the first-base side — then you walk up the stairs, and all of a sudden, there’s the light. It’s the sunshine, or if it’s a night game, all of those lights on the field. You go from the darkness to being able to see and smell the green grass, the popcorn, even the cigars and cigarettes. You see that freshly mowed grass, and Mount Rainier majestically over right field, and the apartments over left field — we called that Cheapskate Hill. It was a very innocent time.”

Kapner remembers how the concourses of the stadium functioned as a kind of living museum, with photos all over the walls as tributes to Seattle’s baseball past, and how that lit up the imagination of his historically inclined younger self.

“That was one way for a very young kid to start to absorb the history that came before the players that I was watching,” Kapner says, and in many ways that was another genesis of the collection laid out before him today.

The 1945 Christmas Card
THERE IS SOMETHING poignant about holiday greetings from the 1940s, with a kind of optimistic warmth inherent to Christmastime undercut by the awareness of what a turbulent time that would have been to live through. The tagline here is wonderful: “A flock of hits and no errors for Christmas and the New Year.”

The Rainiers had experienced the most successful spell they’d ever have in the period leading up to World War II. They won regular-season Pacific Coast League titles in 1939, 1940 and 1941, and took PCL pennants by winning in the playoffs in 1940, ’41 and ’42.

With peace and hopes for a return to normalcy close on the horizon in 1945, the Rainiers had more reason than most to be optimistic that they could get right back to their winning ways.

Bobby Balcena, who was a popular Rainiers outfielder in the late 1950s, was also the first player of Filipino ancestry to play in the majors, getting called up to appear in seven games for the Cincinnati Reds in 1956.

Artie Wilson and Bob Boyd were the team’s first Black players, both joining the squad in 1952. Boyd edged Wilson for the PCL batting title on the last day of the 1952 season, with a .320 average to Wilson’s .316. They were two of only three PCL hitters to top .300 that year. Boyd played just that season in Seattle, between nine years in the major leagues. Wilson, who played for the Rainiers from 1952 through 1954 and again for most of the 1956 season, had brushes with greatness: He was chosen as the starting shortstop for Negro leagues all-star games for four years, playing with the Birmingham Black Barons. Wilson also mentored a young Willie Mays and played a single MLB season with the New York Giants the year before he arrived in Seattle.

Player photos featuring Fred Hutchinson, Jim Bouton and Lou Piniella
SEATTLE’S FORTUNES ON on the baseball field were inconsistent even before the Mariners set up shop here to perpetually toy with the emotions of local fans. But players have left lasting legacies on the sport and on the region in other ways.

Fred Hutchinson, for example, was a homegrown Rainiers star when he was young, and pitched for a long while in the majors. He managed three different MLB teams before being diagnosed with fatal lung cancer at the height of his managerial career as leader of the pennant-contending 1964 Cincinnati Reds, dying that year at the age of 45. In 1975, to honor his legacy, his brother Bill created the Fred Hutchinson Cancer Research Center, which is now one of the preeminent facilities of its kind in the world.

Bouton was more controversial, but he inarguably left a mark on baseball — more specifically the culture and the business of baseball.

His memoir, “Ball Four,” was based largely on the Seattle Pilots’ one-and-only season in the majors in 1969. The book pulled back the curtain on the drug use and promiscuous party scene in the game at that time, humanizing icons as flawed human beings. His depiction of the imbalance between players and ownership also presaged a player-empowerment movement still ongoing today: Curt Flood’s lawsuit against Major League Baseball that eventually resulted in free agency was heard by the U.S. Supreme Court two years after “Ball Four” was published.

Bouton was maligned by many around baseball, but he retained some happy memories of his time in Seattle. Kapner got to know him over his many years of collecting memorabilia, and was honored to drive Bouton around during a local book tour promoting the release of the most recent edition of his iconic book.

This was in 2000, and Sicks’ Stadium was long gone, having been demolished in 1979. Bouton knew that, but between signings, he asked Kapner to drive him out to where the stadium used to stand, anyway. The site is now a Lowe’s Home Improvement store, but Bouton persisted, wanting to walk in and look around.

“He’s walking around Lowe’s with his head down, and he says, ‘I want to know where the pitching rubber was,’ ” Kapner recalls. “And he found this white paint strip on the floor, and I never would have thought to look for it. It was the same shape, and white. He stood on it. ‘This is it.’ He looked all around. I could tell that in his mind, he wasn’t seeing Lowe’s. He was seeing what the ballpark looked like, and feeling what that experience was. He was taking himself back to 1969.”

Watching Bouton, Kapner couldn’t help but see it, too: Sicks’ Stadium in all of its glory, himself as a child, walking up those stairs into the light.

“It was like somebody taking me back with him all these years,” Kapner says.

Matt Pentz: mattjpentz@gmail.com; Matt Pentz is a Seattle-based freelance writer whose work has appeared in The New York Times, the Athletic, VICE and the Ringer, among other publications.
View Comments
Posting comments is now limited to subscribers only. View subscription offers here. For more information, visit our FAQ's.