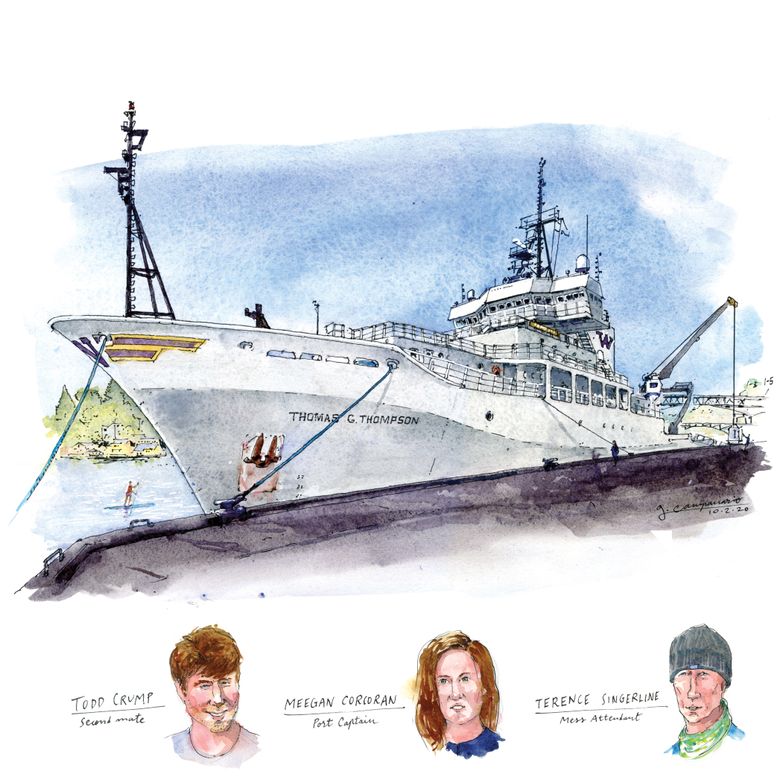 THE R/V THOMAS G. Thompson has just returned to its home port at the University of Washington School of Oceanography in Portage Bay after a weeklong research trip off the coast of Oregon.

It’s rare to see the impressive oceanographic research ship in Seattle these days. After a midlife overhaul, she spent more than two years away, taking scientists on research cruises spanning every ocean, from Uruguay to South Africa to New Zealand, before returning to this dock in May in the midst of the pandemic.

Port Capt. Meegan Corcoran, who is in charge of all the ship’s operational logistics and staffing, recalls the stressful time coordinating the Thompson’s schedule when COVID-19 hit and many ports around the world shut down. Scientific cruises out of Fiji and Tahiti were canceled. The vessel had to make an emergency stop to refuel in Sydney and an unscheduled detour to Hawaii to quarantine everyone before being allowed back to Seattle.

As a crane unloads scientific equipment, Corcoran introduces me to crew members Terence Singerline and Todd Crump, who regale me with tales of the tight-knit crew’s journeys to places most people will never have the chance to see, such as the Galápagos Islands and the Antarctic. She points to some marks on the hull and says the ship will be getting a new paint job at the Lake Union Dry Dock before its next voyage on Jan. 9. I’m thrilled to have seen the legendary Thompson up close before it sails off again.