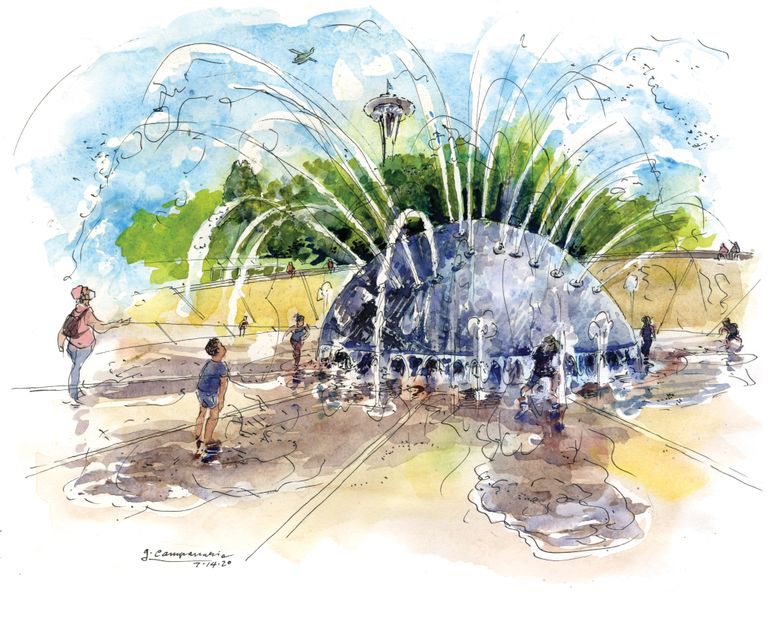 THE INTERNATIONAL FOUNTAIN at Seattle Center is always a big draw for families with small children.

On this hot summer afternoon, most of the parents are sitting on the edge of the bowl while their kids run back and forth and around the dome where the water shoots up in the air.

A young dad said he and his toddler already had been to the huge playground next to MoPOP, but his little boy still had more energy to burn before naptime.

Seattle doesn’t lack cool fountains that offer a refreshing sight amid hot temperatures (Drumheller at the University of Washington is perhaps the most iconic), but only the International Fountain doubles as a big playground and comes with a soundtrack. Duke Ellington, Beethoven’s Ninth Symphony and a mix from Northwest rock ‘n’ roll legends are some of the preprogrammed shows that play every half-hour. Seasonal mixes created by local musician James Whetzel also play in between the synchronized shows.

Whetzel told me he couldn’t record a mix for this summer due to the pandemic, but the mix he composed before the COVID shutdown is still playing. He described it as a contemplative, “Keep calm and sequester on” mix, which seems fitting for the current times.