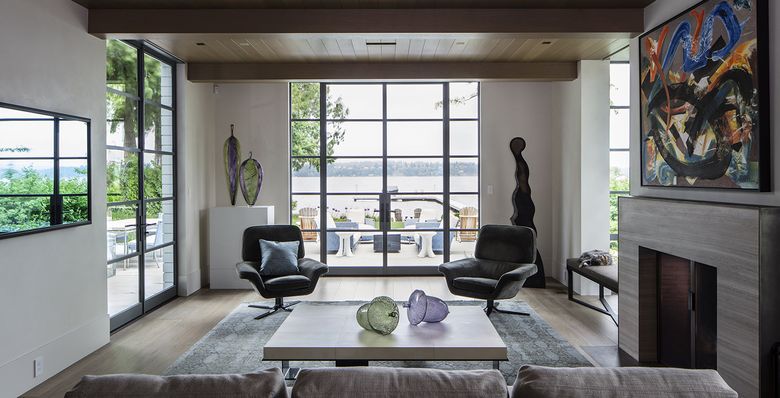 In a gleeful expression of collaboration, a lakefront home merges contemporary and traditional design.

ABOARD HER PADDLEBOARD, Lisa has logged a lot of nautical miles navigating the waters of Lake Washington — and reflecting on the lakefront homes encircling it.

So when she and her husband, Craig, decided to move their family from Riviera Beach (on the lake) to Washington Park (also on the lake), Lisa had a pretty specific vision — or, more accurately, feeling — of the home they should build.

“I’ve been all around the lake, and I’ve seen the houses that pop out to me the most,” she says. “They were always the bright, white houses — pretty. The term I used was ‘a happy house.’ ”

Rebuilding a Bainbridge Island home with a sense of history

This Queen Anne remodel is incredibly thoughtful on many levels, including a new one

Craig and Lisa adored their classic, walkable new neighborhood and its close-knit sense of community. Their new waterfront site, tricky but lovable, radiated waves of joy. But its existing 1940s-era home had seen happier days.

“It was very basically a summer cabin built a long time ago,” says the architect of happiness, Stuart Silk. “The ceilings were very low. Some of the floors were sloped and didn’t line up. It had been added on to three or four times, incrementally. From a cute standpoint, if you went and had a weekend getaway, you’d think it was really cozy. It wasn’t the kind of home you’d want to live in full-time.”

First, though, design principal Silk, Stuart Silk Architects principal Mike Troyer and project manager Michael McFadden — along with builder Schultz Miller, interior designer Amy Baker and a raft of custom craftspeople — had to turn a couple potential frowns upside down: Pressing setback and sightline requirements necessitated the retention of “one section of the (original) wall,” Silk says, and the melding of traditional (Lisa) and contemporary (Craig) design preferences at one point called for a return to the proverbial drawing board.

“We merged both into a distinctive expression and a unique reflection of each of them,” Silk says. “We created a traditional feel with white painted wood siding and traditional gabled roofs. To create a fresh, contemporary feel, we stripped key details, such as eaves, to their bare essentials and used modern materials, including painted steel windows and zinc roof shingles.”

It’s hard not to beam in appreciation of this gleaming, gabled beauty, but there’s even more blended delight inside — once you’ve found the custom hidden handle in the entry’s huge, textured, stainless-steel pivot door. (Delivery people sometimes cannot, Craig says.)

“We brought in oak, very traditional, but treated it in a contemporary way: cerusing,” Silk says. “We brought steel in from outside, with detailing in the stairs and the fireplace surround. The walls aren’t just drywall with a coat of paint; they have a specialized Venetian plaster, a luster to it. And we used wood beams in the ceiling, which give it a more informal quality. An all-white room starts to feel a little too contemporary.”

This, though, feels minimal and warm, exquisitely brightened by light through towering bay windows. It also feels as refreshing as an October dip in the lake: This home is designed for, and filled with, a vibrant family that really lives here.

“It’s nice to have a nice house, but the reality is, we have kids and pets (a 13-year-old daughter and 8-year-old son, plus Daphne the dog, a kitty, a rabbit and guinea pigs),” says Lisa. “I was really adamant it had to be livable.”

With 5,300+ square feet, five bedrooms, three full baths and two powder rooms (“There’s no fighting for a bathroom here,” Lisa says), there is purposefully designed real-living room (and rooms) for everyone.

“The kids each have a room. There’s a playroom, to keep all the stuff in there,” Craig says. At the top of the amazingly detailed floating staircase, a pocket door shuts off a family room, so everyone “can watch movies and eat popcorn.”

Up another level (“the attic,” but at its loveliest): a mirrored workout room, storage galore and a craft room for Lisa. “Over the years, I’ve learned to cut hair, make jewelry, skin care, all these little hobbies,” she says. “It’s for all the things I don’t know what to do with.”

Off the wide-open kitchen, anchored by a baby-blue Lacanche stove inspired by the original home’s light-blue laminate cabinets (“a happy feeling,” Lisa says), stretches her other hub: the pantry.

“I need a place to be a mom and a family,” Lisa says. “They built me a long magnetic wall; we sort of collect magnets. I really like to cook and make projects, and Craig likes everything out of sight, so our compromise was a very large pantry.”

It’s a very happy compromise. Which is not only the goal of the home, but its theme.

“Lisa is number one a mom; she doesn’t want something that’s so precious that she doesn’t feel comfortable in it,” Silk says. “She was not interested in designing a showpiece. She tried to make it happy and spontaneous and maybe slightly less serious. She knew if the architects got too serious, it might end up being too precious.”