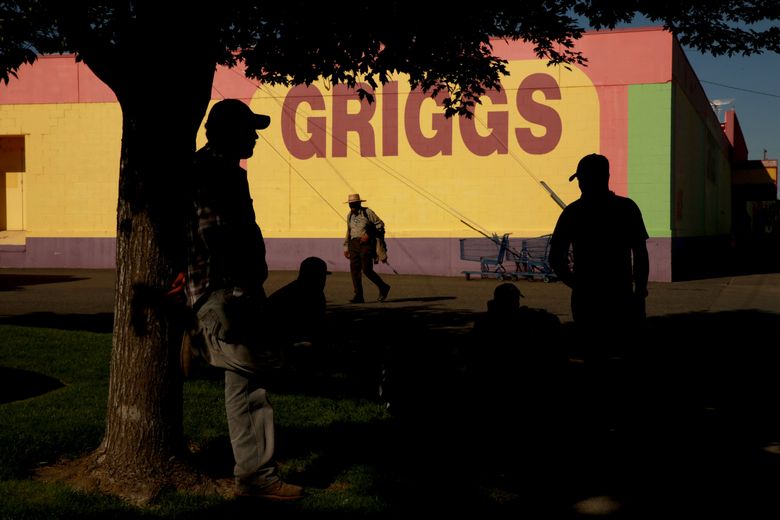 Farmworkers relax in the shade after working in the fields and shopping for groceries at Fiesta Foods, a Hispanic grocery store in East Pasco. In 2015, farmworker Antonio Zambrano-Montes was shot and killed by Pasco Police officers. (Erika Schultz / The Seattle Times)

Antonio Zambrano-Montes’ family had filed a lawsuit, claiming the man’s civil rights had been violated by the three officers involved in the shooting.

By
Tyrone Beason
The Seattle Times

Editor’s note: This story is part of Postscripts, a series in which we catch up with some of the people and places we’ve visited in Pacific NW magazine.

Three years after the fatal shooting of Mexican farmworker Antonio Zambrano-Montes by police in Pasco, a judge signed off on a $750,000 settlement to be split among his survivors.

Zambrano-Montes’ family had filed a lawsuit arguing that the three officers involved in the Feb. 10, 2015, shooting at a Pasco intersection violated Zambrano-Montes’ civil rights. He was shot at 17 times by the officers.

• Wish we could report road rage is cured, but saner commuting still starts with the person in the driver’s seat

[The Backstory: How, this year, ‘Postscripts’ became its own main event]

Zambrano-Montes, who was 35, was reportedly behaving erratically and throwing rocks at passing vehicles. Tests later confirmed he had methamphetamine in his system at the time of the shooting.

Subsequent investigations found that the officers were justified in using deadly force due to the threat they believed he posed.

His death drew international attention after video of the shooting went viral. Local activists staged weeks of demonstrations to call for justice in the case and greater scrutiny of policing in the city’s Latino community.

Pasco, one of the Tri-Cities, along with Richland and Kennewick in South-Central Washington, is majority Latino and attracts migrant workers from Mexico seeking work each year in the area’s fruit orchards.

Pacific NW magazine ran a story on the shooting and the town’s attempts to heal in August 2016.

The settlement, reached in the spring, came after months of wrangling by family members’ attorneys over how to share the award.

Zambrano-Montes’ two teen daughters each will receive $125,000 after fees and other costs, according to a report in The Tri-City Herald. His parents in Mexico will receive a net amount of $100,000 each, and his daughters’ mother will receive $50,000.

The case highlighted the difficulty of prosecuting officers who use deadly force because of a state law that set a high bar for proving ill intent.

While lawmakers work on use-of-force legislation, Washington voters approved Initiative 940 in the fall. It would lower that legal threshold and require officers to undergo training in de-escalating conflicts and to offer mental-health intervention and first-aid on-site.

Wish we could report road rage is cured, but saner commuting still starts with the person in the driver’s seat

Editor’s note: Out of concern and respect for the people in this story and their loved ones, the comment thread on this story has been removed.