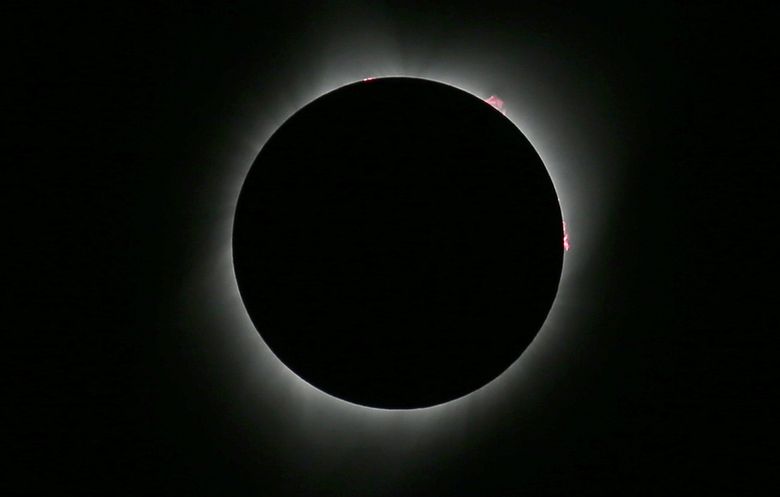 A Shot in the Dark / Aug. 21 | Standing on the Madras, Oregon, high school football field, surrounded by several hundred amateur astronomers, I used a Canon 1DX camera with a Canon 300 mm lens and a 1.4 extender, making the lens a 420mm. I used a 10X neutral density filter until the moment of totality, then I quickly removed it, because the sun was totally covered by the moon. According to NASA, the reddish flames shown here on the outside edge of the corona are called solar prominences: gasses flaring out thousands of miles into space. Because there were no hotel rooms available, I ended up sleeping in a car for four nights in Madras. (Greg Gilbert/The Seattle Times)

In the sky, on the streets, in our hearts: an uneasy mix of darkness and light.

IN MORE WAYS than one, it was the year of eclipse: a dark shadow like few of us have ever seen, more fully obscuring sustaining sunlight than we thought possible.

Seattle Times photojournalists will lead a conversation about our Pictures of the Year.

PARKING: Available in the garage beneath the library for $6.

MORE ONLINE: For more of our photographers’ best work from 2017, go to seattletimes.com/pacific-nw-magazine.

The August celestial event, much-anticipated by solar observers and captured starkly in a powerful cover image by 50-year veteran shooter Greg Gilbert, was one of those signature moments when we all stepped outside the normal and realized that something we knew would happen feels profoundly different when it’s actually experienced, at the goose-bump level.

Such was 2017, both in the celestial world and here on the ground. The first year of the Donald Trump Revolution stripped the scab off years of festering American social wounds, leaving citizens grappling with the realization that arguments considered long-settled were once again open — for healing or further rot, to be determined.

RELATED: Pacific NW magazine postscripts: Where they — and we — are now

Glimpses of that unease, captured frame-by-frame by a talented cadre of photographers and videographers, spilled across the pages of The Seattle Times, and screens of seattletimes.com, throughout a year likely to be long-remembered, for better or worse.

FRONT AND CENTER, passionate cries for social justice were seen in Ken Lambert’s depiction of the faces of Black Lives Matter protesters on Seattle streets — and in Bettina Hansen’s poignant image of Seahawks lineman Justin Britt’s subtle, powerfully symbolic touch of the shoulder of teammate Michael Bennett, seated during the national anthem, at CenturyLink Field.

Riptide political currents also came into full view with Alan Berner’s ultimately prescient image of a darkened outline of then-Seattle Mayor Ed Murray, whose political career would be claimed by allegations of sexual abuse, and Erika Schultz’s image of a beaming Jenny Durkan, chosen to take his place in a groundbreaking election featuring two female candidates.

We didn’t wallow in all the politics of 2017, however; escape seemed newly urgent, and we indulged full-tilt in a long-favored one: sport. Key moments were captured by the lens of veteran shooter Dean Rutz’s telling image of local hero Kelsey Plum colliding, in full “Oof!” fashion, with a competitor as she left the University of Washington for the WNBA with a record as one of the great college hoopsters in U.S. history, and a similarly well-timed capture of the instant UW quarterback Jake Browning was sent skyward in a November game against Utah at Husky Stadium.

WE WENT ON with life as usual — unfortunately, including long hours sitting in traffic, as illustrated by Mike Siegel’s telling sea of creeping headlights and taillights on Interstate 405. Our celebration of art with increased passion and refreshing personal styles leapt from pages via Schultz’s heartwarming swirl-along with Mexican folk dancers at Seattle Center; Berner’s mind-blowing vista of Yayoi Kasuma’s “infinity mirrored room” at the Seattle Art Museum; and Ellen M. Banner’s charming depiction of rainbow-hued celebrators of spring and her poetic glimpse of life backstage in the world of dance.

And through it all we saw, stage-center, the broadening of the gap between America’s haves and have-nots, illustrated in visceral fashion by Times photographers’ ongoing depictions of life on the streets by a growing number of homeless individuals, literally in the shadows of the gleaming glass orbs of Seattle’s Amazon headquarters, a symbol of a prosperous regional tech economy that has yet to trickle down to the masses.

Back to that shadow … symbolically ominous? In the natural world, balance prevails. Sunlight returns. The human world is much more temporal. With 2017 — thankfully, for many — in the rearview mirror, life will shake itself off and move forward. But in which direction seems, after a tumultuous year, a question far more open than usual.

Ron Judd is a Pacific NW magazine staff writer. Reach him at rjudd@seattletimes.com or 206-464-8280. On Twitter: @roncjudd.
Advertising