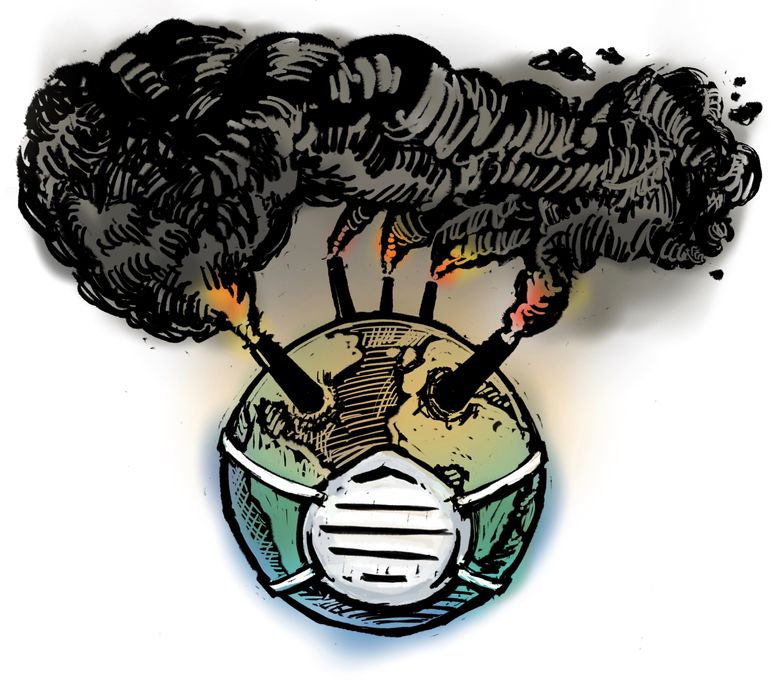 The iconic photo that defines climate change has changed from the polar bear on a shrinking ice floe to a child wheezing for breath in a hospital emergency room.

By
Michael Soman
and
Mark Vossler
Special to The Times

A recent report from The Lancet, the world’s most widely read medical journal, along with recent October reports from the U.S. Climate Assessment and Intergovernmental Panel on Climate Change (IPCC) all confirm what we and other physicians are seeing in Washington and beyond — climate change is harming and killing our patients today.

The numbers are striking. The Lancet’s global research team reports that 157 million more vulnerable people experienced heat waves and attendant health risks in 2017 than in 2000. Pollution from particulate matter, a key component of wildfire smoke and vehicle exhaust, contributed to 2.9 million premature deaths in 2015 alone. Vector-borne disease, food shortages and mental-health impacts are becoming more prevalent and will continue to do so.

The findings also confirm that people who did the least to create the problem are disproportionately affected by the consequences.

Do you have something to say?

Share your opinion by sending a Letter to the Editor. Email letters@seattletimes.com and please include your full name, address and telephone number for verification only. Letters are limited to 200 words.

Our emergency-room colleagues recount devastating stories of children coughing and wheezing due to worsening asthma during the smoke pollution of this summer’s wildfires, and data support their experience. The U.S. Climate Assessment reports that “smoke events” from 2004-2009 were associated with a 7.2 percent increase in respiratory admissions for adults over 65 in the eastern Northwest.

In Boise,  seven of the past 10 years have included at least one week during fire season when air was classified as “unhealthy for sensitive groups” (including children).  This has caused cancellation of sports-related school activities.

As we have all seen, Western Washington has also experienced fire- and smoke-related health issues in the past couple of years.

The good news? The Lancet confirms that climate change is also the biggest health opportunity of this century. Emerging research on “co-benefits” (actions that both reduce climate change and promote health) finds that renewable energy, cleaner transportation and smarter urban design can promote benefits of physical activity, clean our air and improve mental health all while reducing greenhouse-gas emissions and creating a hopeful future for our children.

Health professionals in Washington are already taking action on climate change. Medical organizations representing thousands of Washington doctors and nurses endorsed Initiative 1631, which would have imposed a fee on carbon emissions. It failed to pass. (It is notable that the IPCC, as well as Yale economist William D. Nordhaus, co-recipient of the 2018 Nobel Prize for Economics, endorse a price on carbon emissions, which roughly 40 countries currently have.)

Clinicians have also mobilized to successfully resist construction of new fossil-fuel infrastructure (and will continue to do so in Kalama and Tacoma) and will advocate for statewide emissions-reducing policies next year in Olympia. Still, we can do more, as individual clinicians and through our medical groups.

Historically, many issues have had to reach a tipping point to receive forceful, clear and unwavering support from our medical profession.  Firearm control, bicycle helmets and cigarette smoking are examples of important health issues that had to go through processing within our culture for medical professionals to collectively and unambiguously own the need to advocate on behalf of our patients.

The difference now is that time is not on our side. The problem becomes more pressing every day, and we are running out of time to make a difference for our patients and families.

As physicians, we are called to advocate for our patients and prevent what we cannot cure. These three reports confirm what many of us already know. In fact, one of the most distressing and shocking things about the three reports is that they are no longer surprising.

Medical professionals cannot wait any longer. Increasingly, the iconic photo that defines this crisis has changed from the polar bear on a shrinking ice floe to a child wheezing for breath in one of our emergency rooms. The human cost is enormous and growing rapidly, and low-income and communities of color are bearing a disproportionate share of the burden.

For the sake of our patients and our children’s’ health, we must leave fossil fuels — coal, oil and “natural” (fracked) gas — in the ground. It’s time for Washington’s legislators to make this issue a priority and take bold approaches to reducing emissions in this upcoming legislative session. Our collective future depends on it.