We’ve been asking readers “What do you want to know about the local journalism crisis?”

Here are more answers to readers’ questions about the Seattle Times’ efforts to shore up America’s free-press system.

Got a question? Go to the “Ask the Free Press Editor” link at the bottom of this post. Please use that instead of my email.

Q. It would be interesting to see a chart showing how many journalists exist in various local and major papers now versus, say in 1980 and 2000 .

Free Press Editor: It’s hard to be precise, since newspapers don’t all supply figures to a central authority, but it’s safe to say  there are less than half as many reporters at work now than even a decade ago.

In its most recent State of the News Media report, the Pew Research Center looked at two overlapping studies and estimated 47% fewer newspaper reporters were at work in 2018 than were a decade earlier. That drop has almost certainly increased in the last year, since newspapers were already shedding staff before the pandemic froze the U.S. economy.

I’m testing a statewide survey and will report back on Washington’s losses if I get good data. Meanwhile, the Tow Center at Columbia University is launching a global survey of newsroom job losses during the pandemic. 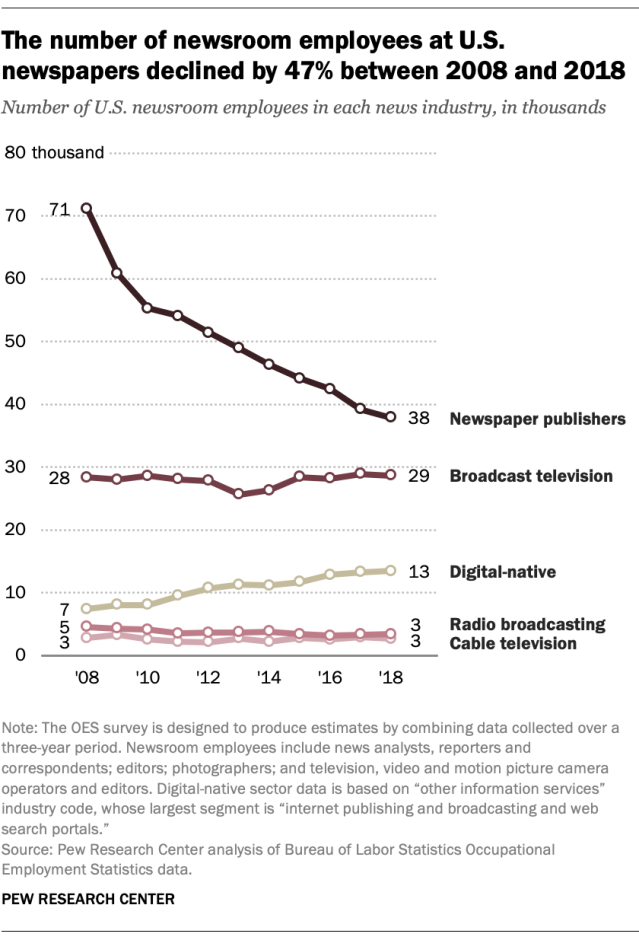 Q. “A few years ago, there was talk of modifying federal tax laws to benefit local newspapers. Would that help? Is it a beneficial idea?”

Free Press Editor: Short answer is, yes, there have been tax revisions and they have helped.

Long answer (any discussion of tax codes guarantees a long answer!) is that in the future, these efforts will be divided into “Pre-pandemic-era” and “Post-pandemic.”

Post-pandemic: Right now in Washington, D.C.,  18 Democrats in the U.S. Senate are pushing for stimulus funds for local (as opposed to nationwide) news organizations shivering in the economic freeze brought on by the pandemic. No detailed proposals have been released, but tax-code revisions would likely be part of any comprehensive approach. Stay tuned for details.

Pre-pandemic: As digital advertising and e-tailing shifted ad dollars away from traditional news outlets, there have been several changes to federal law to increase the survival rate of local newspapers.

If you want to ask a question, please use this Ask the Free Press Editor link instead of my email.

Dean Miller: deanmiller@seattletimes.com; is editor of The Seattle Times Save the Free Press initiative.