Skip to content
By
EDGAR H. CLEMENTE
and
EDGAR MORENO
The Associated Press

TAPACHULA, Mexico (AP) — As Mexico President Andrés Manuel López Obrador opened talks on immigration and other issues with his North American counterparts in Washington, a new migrant caravan walked out of the southern Mexican city of Tapachula on Thursday.

The new group heading north served as a fresh reminder of the urgent need to address the region’s migration, which López Obrador hoped to convey in his meeting with President Joe Biden.

About 2,000 mostly Central American and Haitian migrants made up the latest attempted caravan. They walked out of Tapachula in a boisterous show carrying their belonging in small knapsacks or in bundles atop their heads. Small children rode on parents’ shoulders or in rattling strollers.

Alex Leyva of Honduras said he was attempting to travel north in a caravan for the second time. The first time he left with another group Oct. 23, but he got sick and had to drop out. Mexican immigration agents sent him back to Tapachula where he had already started the process of requesting asylum in Mexico. 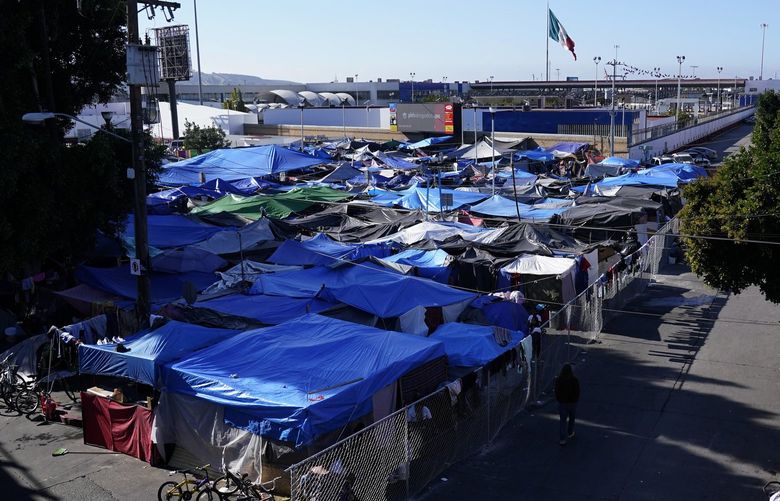 Migrant camps grow in Mexico amid uncertainty on U.S. policy

“My country is in the worst economic, crime, hunger situation,” Leyva said. “There are no studies, no education for the kids. That’s why my wife and I decided to try to achieve our objective” of getting a better life.

Local police controlled traffic as the migrants walked toward the city’s outskirts, but authorities did not attempt to stop them.

The earlier caravan that Leyva first travelled with is now in southern Veracruz state, but it has dwindled to several hundreds migrants, down from a high point of some 4,000.

Luis García Villagran, of the Center for Human Dignity, said the migrants are demanding documents that allow them to be in all of Mexico. The Mexican government had relied on a strategy of containing migrants in the southernmost part of the country to alleviate pressure at the U.S. border.

But those states are the poorest and there is far more opportunity to find work in Mexico’s northern states.

García Villagran said that even migrants who have received humanitarian visas that are supposed to allow them to travel in Mexico have been detained by immigration agents and sent back to Tapachula.

Migrants confined to Tapachula near the Guatemala border have grown increasingly frustrated with the slow processing of their asylum cases. They complain that they are unable to find work that would allow them to support their families.

The caravans began several years ago as a way for migrants who did not have the money to pay smugglers to take advantage of safety in numbers as they moved toward the U.S. border. However, more recently Guatemala and Mexico have become more aggressive in quickly breaking up the caravans with security forces.

The dwindling caravan in Veracruz was the first to advance so far into Mexico in the past two years, but the grueling conditions of the trek and the government’s offers to regularize migrants’ status has led the majority to drop out.

López Obrador named addressing migration in the region as one of his priorities for Thursday’s North America Leaders’ Summit. He has pressed the Biden administration to invest in expanding a tree planting program that pays farmers to plant certain kinds of trees on their land. The money allows the rural poor to stay on their land rather than feel economic pressure to migrate, he says.