In 2007, Dan Berschinski graduated from West Point. He headed off to Fort Lewis, Wa. , where, in July of this year, he led an infantry platoon to Afghanistan.

In 2007, Dan Berschinski graduated from West Point. He headed off to Fort Lewis, Wa. , where, in July of this year, he led an infantry platoon to Afghanistan.

On Tuesday night, 1st Lt. Berschinski, returned to West Point, now a double amputee with a keen sense of the perils of this war, and a strong desire to hear his commander in chief give a long awaited policy speech that outlines the way forward.

“This is a very tough decision for the president, and I like the way he framed things,” Berschiniski said in a Tuesday evening telephone after Obama spoke. “I still have my men over there in harm’s way, so it’s important that this finally get out because soldiers need to know know what’s going on.”

Berschinski had both legs mangled and one army badly injured by a landmine in August, and was sent for treatment to Walter Reed Army Medical Center in Washington D.C.

In early November, Berschinski had a chance to meet with Obama, when the president visited Walter Reed. Berschinski also wanted to find some way to attend Obama’s West Point speech, and a few days ago got an assist from a high-powered Pentagon visitor to Walter Reed: Gen Peter Chiarelli, the Army vice chief of staff, who made the arrangements.

“I kind of invited myself up there, and West Point was very accommodating,” said Berschinski whose visit to West Point in New York state. was his first overnight stay away from his hospital bed at Walter Reed.

In the auditorium where Obama gave the speech, Berschinski was a distinctive figure, clad in his Army infantry fatigues among a sea of cadets clad in formal gray dress uniforms.

Berschinski, a 25-year-old from Peachtree City, Ga. is part of the 5th Brigade, 2nd Infantry Division, which has been deployed with eight-wheeled Strykers vehicles to southern Afghanistan that is a stronghold of Taliban forces. Since arriving in the summer, the brigade has lost more than two dozen soldiers. 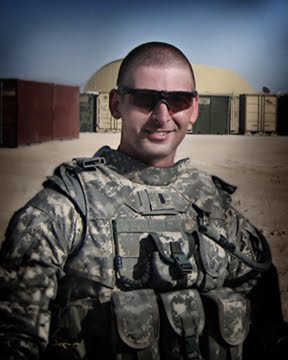 Berschinski’s is part of Bravo Company of the Stryker brigade’s 1st Battalion, 17th Infantry Regiment. The company has about 150 soldiers that patrol a long swath of the Arghandab Valley in Kandahar Province. This has been tough duty in an area rife with roadside bombs as well as the land mines such as the one that gravely wounded Berschinski about one month into the deployment.

Obama’s decision to send an additional 30,000 troops to Afghanistan next year is expected to boost troop levels in Kandahar Province as part of a stepped up effort to improve security in southern Afghanistan. But Obama put limits on that effort, saying he would begin to draw down troops in July , 2011.

“It must be clear that Afghans will have to take responsibility for their security and that America has no interest in fighting an endless war in Afghanistan,” Obama said.

Berschinski appeared to think the president struck the right balance.

“I am a big fan of force power. You send more guys. It’s better. But also as a soldier, I want everyone to come home eventually, and I think this is a good combination. We’ve been there for a while, so let’s do the job properly and come home.”

As for Berschinski, his home coming has been a marathon of surgeries and
rehabilitation. . In recent weeks, he has walked on an initial pair of artifical legs: Next week, he expects to check out of Walter Reed Army Medical Center, and begin outpatient therapy. 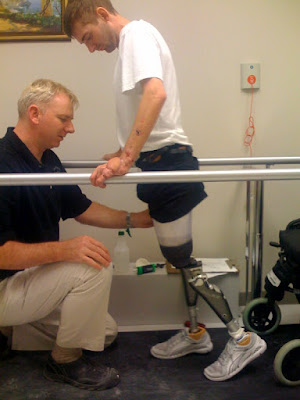