FUKUSHIMA, Japan — After an earthquake and tsunami pummeled a nuclear plant about 12 miles from their home, Tomoko Kobayashi and her husband joined the evacuation and left their Dalmatian behind, expecting they would return home in a few days.

It ended up being five years. Even now — a decade after those deadly natural disasters on March 11, 2011, set off a catastrophic nuclear meltdown — the Japanese government has not fully reopened villages and towns within the original 12-mile evacuation zone around the Fukushima Daiichi nuclear plant. And even if it did, many former residents have no plans to return.

Some of those who did return figured that coming home was worth the residual radiation risk. Others, like Kobayashi, 68, had businesses to restart.

“We had reasons to come back and the means to do so,” said Kobayashi, who manages a guesthouse. “It made sense — to an extent.”

Yet the Fukushima they returned to often feels more eerie than welcoming.

A hulking new sea wall, for instance, built to prevent future tsunamis hurtling into the plant, stands sentry on the nearby Pacific coastline. It is a jarring feature in a pastoral region once known for its peaches and a thick type of ramen noodle.

In nearby towns, such as Futaba, weeds push through the asphalt and climb across the facades of deserted apartment blocks.

A bicycle that may have once carried its owner to school, or the grocery store, lies abandoned in the undergrowth.

For many returnees, moving back is a process of rediscovering places that feel familiar and hostile at once.

“I’m always asked, ‘Why did you return? How many people returned?’” Kobayashi said. “But my question is: What does that even mean? That place no longer exists.” 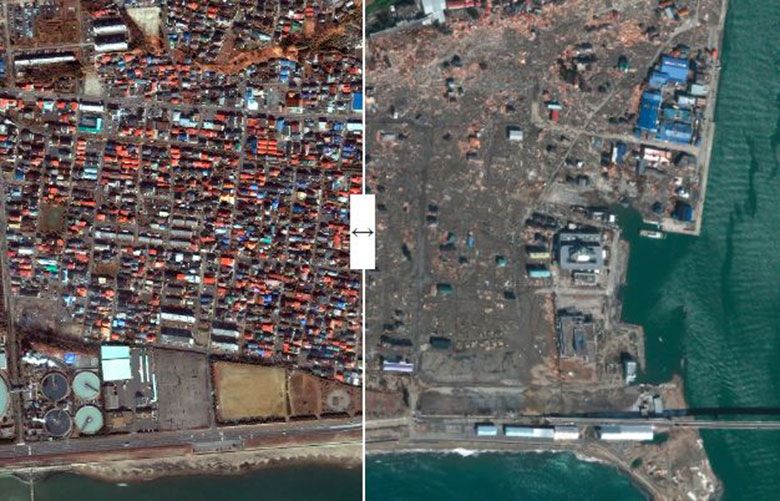 The disaster that ripped through northern Japan in March 2011 killed more than 19,000 people and prompted a global reckoning with the dangers of nuclear power. It also gave the name Fukushima an international notoriety on par with Chernobyl’s.

Within Japan, the disaster’s legacy still feels painfully immediate. A government proposal to release about 1 million tons of contaminated water into the sea has riled local fishermen, and cases against the government and the plant operator are winding through the country’s highest courts. The issue of nuclear power remains highly fraught.

And for miles around the plant, there are physical reminders of an accident that forced the exodus of about 164,000 people.

In Katsurao, about 20 miles inland from Kobayashi’s home, radioactive soil sits in temporary waste sites. From a distance the green mounds look like children’s toys arranged on a beige carpet.

In Futaba, the grounds of a Buddhist temple are still littered with debris from the earthquake.

And in some Fukushima forests, scientists have found evidence of lingering radiation.

Whenever new storms strike Japan’s Pacific coastline, some people in Fukushima prefecture shudder from memories of the 10-year-old trauma.

“I think there is a possibility that this will be a place where not many people can live anymore,” one resident, Hiroyoshi Yaginuma, said two years ago after a typhoon crashed ashore, flooding his auto body shop in the industrial city of Koriyama.

It can feel that way in the town of Namie, where bags of radioactive waste have piled up.

Or in the Tsushima district in Namie, where so many homes were demolished because of the radiation that some streets are now just roads flanked by empty foundations.

Or in fields that once produced pumpkins, radishes and spring onions, and which now lie fallow.

Young families that left the evacuation zone have built new lives elsewhere. Yet across Fukushima, local governments, sometimes with funding from the nuclear plant’s operator, have been building new schools, roads, public housing and other infrastructure in an effort to lure former residents back.

Some residents in their 60s and beyond see the appeal. It can be hard for them to imagine living anywhere else.

“They want to be in their hometown,” said Tsunao Kato, 71, who reopened his third-generation barbershop even before its running water had been restored. “They want to die here.”

One upside is that the threat of lingering radiation feels less immediate than that of the coronavirus, said Kato, whose shop is in the city of Minami Soma. In that sense, living amid the reminders of nuclear disaster — in towns where streetlights illuminate empty intersections — is a welcome sort of social distancing.

At a Futaba nursery school, umbrellas have sat untouched for a decade, protecting no one from the rain.

Nearby, a collapsed house is still waiting for a demolition crew.

Kato said that while he was happy to be back, he struggled to balance a desire to stay with the knowledge that living somewhere else would probably be safer.

“Logic and emotion can’t mesh,” he said, “like oil and water.”

Like Kato, Kobayashi had been running a family business, in her case a guesthouse, when the magnitude-9 earthquake struck. The guesthouse in Minami Soma has been in her family for generations, and she took it over in 2001 when her mother retired.

The guesthouse sustained significant water damage from the tsunami. But Kobayashi’s family restored and reopened it. (Their Dalmatian, who survived the nuclear accident, died just before the renovation was completed.)

They did not expect a surge of tourists, she said, but hoped to serve people who wanted to return to the area and had nowhere to stay.

“There’s no town left,” she said. “If you come back, you have to rebuild.”