Hundreds of people in a town in Ethiopia’s northern Tigray region were stabbed, strangled and hacked to death in an apparent ethnically based attack that may amount to crimes against humanity and war crimes, Ethiopia’s human rights watchdog said Tuesday.

The commission said at least 600 people were killed in the town of Mai Kadra in western Tigray on Nov. 9 when local youths known as Samri, aided by the then-local administration, went door to door killing those they identified as from the minority Amhara and Wolkait ethnic groups.

The killings took place throughout the night of Nov. 9 as security forces of the region’s ruling Tigray People’s Liberation Front, or TPLF, were retreating from the advance of federal government troops, the commission said.

The victims were beaten to death with sticks, stabbed with knives, machetes and hatchets, and strangled with ropes, according to the report. Many others were severely injured and property looted or destroyed, the commission said.

“The killings, bodily and mental injury, as well as the destruction that went on throughout the night . . . indicate the commission of grave human rights violations which may amount to crimes against humanity and war crimes,” the commission said.

The Ethiopian Human Rights Commission’s findings could not be independently verified, but they echo similar accounts reported earlier by Amnesty International, which cited witness statements, photos and videos as evidence. 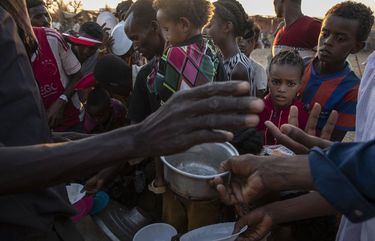 The commission’s findings, the result of a week-long investigation in the town, are the first evidence of possible war crimes being committed in Tigray, where government troops and TPLF forces have been fighting since Nov. 4 in a conflict many fear could destabilize the Horn of Africa.

Ethiopian Prime Minister Abiy Ahmed in a statement called the commission’s findings “heart-wrenching” and urged the international community “to condemn these atrocious acts of crimes against humanity.”

There was no immediate response to the commission’s report from the TPLF. The regional government and refugees fleeing the fighting have accused government forces of targeting ethnic Tigrayans.

The commission warned that the death toll from the massacre could be much higher, as many people were still missing and bodies were hidden in fields outside the town.

Survivors told investigators that some residents in the town hid people in their homes, in churches and in farm fields as the Samri gangs raided the town.

“The unimaginably atrocious crime committed against civilians for no reason other than their ethnicity is heartbreaking,” the commission’s chief, Daniel Bekele, said in a statement, calling for the perpetrators of the attacks to be brought to justice.

Abiy, who comes from the Oromo, the largest ethnic group in Ethiopia, on Sunday issued a 72-hour ultimatum to Tigray’s leaders and combatants to surrender before government forces attack the capital Mekele, with a population of about half a million. The deadline is Wednesday.

The conflict erupted when Abiy sent troops to Tigray after the TPLF army and local militia attacked government military bases in the region and tried to steal artillery and other military equipment. The conflict spread across the border to Eritrea when Tigrayan forces fired several rockets at its capital and sent at least 40,000 refugees fleeing into Sudan.