Even before Burkina Faso’s army declared Monday that it had toppled a democratically elected president, military officers across the region had grabbed power four times in the last 18 months — the highest number of coups in four decades.

In West Africa — from Guinea’s seaside capital, Conakry, to the eastern edge of Burkina Faso — terrain governed by soldiers now stretches nearly 1,300 miles long. That creates a potential “coup bloc,” as one analyst described it.

Alliances with Western powers, particularly France, and neighboring leaders are rapidly unraveling. New partners, namely Russia, are stepping in to fill the void. And the international community is panicking over how this shift could hinder the fight against one of the world’s fastest-growing Islamist insurgencies.

“Coup leaders tend to stick together — especially in the face of sanctions from their traditional allies,” said Aanu Adeoye, a Russia-Africa researcher at the Chatham House think tank in London. “If they don’t get help from the French, for example, there is a group of Russian mercenaries waiting.”

In Burkina Faso, where the latest coup d’etat began early Sunday and climaxed less than 36 hours later with a state television announcement, fighters linked to the Islamic State and al-Qaida have transformed the nation of 21 million over the last seven years. 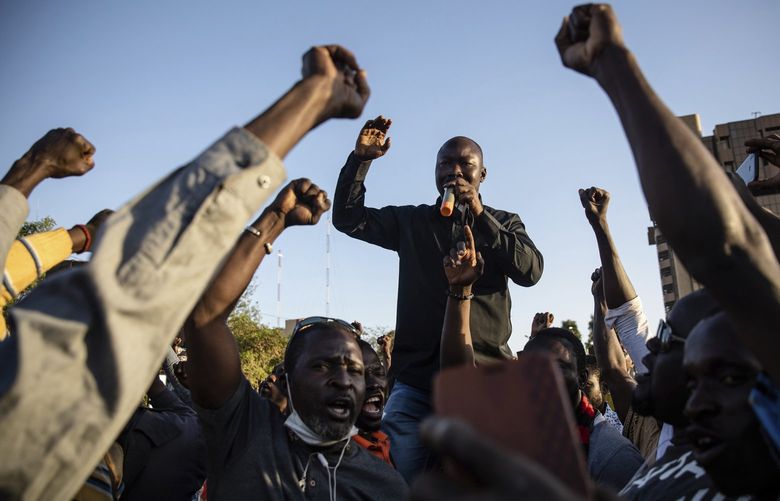 What was once a calm farming state known for a prestigious African film festival is now routinely battered by extremists who have killed thousands of people and displaced millions as they seek to expand their influence.

Military leaders said they overthrew President Roch Marc Kaboré to “get back on the right track,” Capt. Sidsoré Kader Ouedraogo said on national television Monday, “and to gather all forces to fight for our territorial interest, our recovery and our sovereignty.”

West African militaries have reported that they lack the funding and weapons to tackle the growing threat on their own. Since 2013, when al-Qaida militants tried to seize the capital of neighboring Mali, France has acted as the biggest foreign partner against the scourge, deploying roughly 5,000 troops to the region.

But after military leaders took control of Mali in August 2020 — and sacked the acting president again in May 2021 — French President Emmanuel Macron announced a drawdown in West Africa that is expected to reduce its troop strength by approximately half.

Then news broke late last year that Mali was cutting deals with Russian security firms — a development that the nation’s leaders have denied — and Macron asserted that French soldiers would not fight alongside Russian mercenaries. According to the United Nations, the mercenaries have a track record of extrajudicial killings, torture and sexual assault. Germany and Sweden, which supply peacekeeping and counterterrorism reinforcements in the region, have issued similar ultimatums.

The deployment of Russian mercenaries to Mali “can only further deteriorate the security situation in West Africa,” France and 14 other Western powers said in a December joint statement.

But in West Africa, Western powers are losing popular support. French forces have also faced accusations of hurting civilians — such as when a U.N. probe found that an airstrike in central Mali killed 19 bystanders.

Protests across Mali and Burkina Faso feature signs that say: “France, get out!” In the Malian capital, Bamako, demonstrators have turned out by the thousands this month to support the military. Some waved posters that read: “I love Russia.”

“People look at the things going wrong and they blame the government for it, or they blame France for it,” said Ibrahim Yahaya Ibrahim, a West Africa analyst at the International Crisis Group in Niger.

Military juntas, meanwhile, seek legitimacy, he added, “so they are quite tempted by these populist ideas” — new partnerships — “so they can garner more support.”

However, army rule has not translated to less death in Mali. In the year before the junta rose to power, researchers counted 1,815 conflict-related fatalities in the nation. That figure did not fall in 2020 (2,854) or 2021 (1,915), according to the Armed Conflict Location and Event Data Project.

The coup in Burkina Faso, meanwhile, has made it harder for regional leaders to punish military uprisings, said Mathias Hounkpe, program director for the International Foundation for Electoral Systems in Bamako.

“If you are alone, you can be singled out,” Hounkpe said. “But now you have Guinea and are adding Burkina Faso.”

When Mali postponed democracy-restoring elections to 2026 and the 15-nation Economic Community of West African States, or ECOWAS, moved to seal borders and halt trade with the nation this month, Guinea’s junta refused to go along, tossing Bamako an essential lifeline.

“It’s a terrible feeling of starting over again,” he said. Sanou runs a dance studio in the capital, Ouagadougou, that caters to children uprooted by violence. They had to cancel practice this week.

“The coup,” he said, “is not a solution to the deep evil that the country is enduring.”