TORONTO – Canadian Prime Minister Justin Trudeau called for “dialogue and mutual respect” on Tuesday as the anti-pipeline protests and blockades that have paralyzed the nation’s rail system entered their twelfth day.

Demonstrators across the country have joined the blockades in support of the hereditary chiefs of the Wet’suwet’en Nation in British Columbia, who oppose the construction of a natural gas pipeline through their territory. They’ve brought most freight and passenger rail service to a standstill.

“We are not asking that you stop standing up for your communities, your rights and for what you believe,” Trudeau said during a speech in Parliament that was interrupted by heckling. “We only ask that you be willing to work with the federal government as a partner in finding solutions.”

Underlying the pipeline dispute are long-standing questions over land title, and who speaks for Canada’s indigenous people.

The standoff poses a major challenge for Trudeau, who has found his promises to fight climate change, achieve reconciliation with indigenous people and support Canada’s oil and gas sector are frequently in tension.

Demonstrators outside the provincial legislature of British Columbia held an upside-down Canadian flag with “Reconciliation is dead” scrawled across.

Here’s what you need to know.

Q: How did the protests start?

A: The dispute centers on the $4.6 billion Coastal GasLink pipeline, which will carry natural gas from northeastern British Columbia to a $30 billion liquefied natural gas terminal on the province’s coast.

The protests began on Feb. 6, after the Royal Canadian Mounted Police began enforcing an injunction against people in Wet’suwet’en territory who were allegedly impeding access to the construction site. Over several days, officers dismantled the camps and arrested dozens of people.

Photos and videos circulated online show RCMP officers dressed in tactical gear and armed with rifles. In one video, an officer appears to have his weapon fixed in one man’s direction; the man yells, “Take your gun off of me!”

Demonstrators have blocked ports, rail crossing and intersections, staged sit-ins in lawmakers’ offices, shut down two bridges to the United States and disrupted Amtrak service from Bellingham, Wash., to Vancouver.

Q: What’s the difference between a band council and a hereditary chief?

A: The elected band council system was established by the Indian Act of 1867, at the time of Canada’s confederation. The law forced some indigenous people onto reserves and laid out their system of governance.

The band councils “function as sort of intermediaries between the people and the federal Crown,” said University of Toronto law professor Douglas Sanderson, a member of the Opaskwayak Cree Nation. The system was “imposed” on them, he said; “No questions were asked of indigenous people at any point in time about the Indian Act.”

But well before Confederation, the Wet’suwet’en Nation had its own leadership and governance system – one that persists to this day. It’s organized into five clans and 13 houses, each with its own hereditary chief.

In most of Canada, land rights are determined by treaties signed between the Crown and indigenous groups. But in British Columbia, there are few treaties and most land – including Wet’suwet’en territory – is unceded.

The hereditary chiefs assert that band councils have jurisdiction only over the reserve lands created by the federal government, not the broader traditional territories where part of the pipeline is proposed.

In 1997, a land claim case involving the Wet’suwet’en and Gitxsan people made its way to Canada’s Supreme Court. It ruled that indigenous title to land does exist and was not “extinguished” at the time of Confederation, but it did not resolve questions of title for either group.

Q: What has been the impact of the protests?

A: The most disruptive of the protests is adjacent to a rail crossing near Belleville, Ontario, between Toronto and Montreal, set up by the Mohawks of Tyendinaga. The busy corridor links eastern Canada to western Canada and the U.S. Midwest.

Canadian National Railway, the country’s largest freight rail carrier, has shut down its operations in eastern Canada. Via Rail, the main passenger rail carrier, shut down most of its network last week, but said it would resume some service on Thursday.

CN Rail spokesman Alexandre Boulé said the company has issued 450 temporary layoff notices and could add as many as 1,000 more if the situation is unresolved. He said the protesters’ proximity to the crossing makes it impossible to operate safely.

CN Rail transports nearly $190 billion in goods annually. Several industry groups have warned of disruptions to supply chains and looming shortages of everything from propane to groceries to chemicals to treat drinking water.

The carrier has obtained several injunctions against the blockade near Belleville, but the Ontario Provincial Police have not taken any direct action to dismantle it.

Q: How has the government responded?

A: Trudeau, whose government was reduced to a minority in last year’s federal election, has been accused of being slow to respond to the protests. He was in Africa to drum up support for Canada’s bid for a U.N. Security Council seat when the protests began and canceled a trip to Barbados this week to convene an emergency meeting with his cabinet.

Trudeau has resisted calls to respond more forcefully. He has opted instead for “dialogue” during what he described as a “critical” moment for the country. Front of mind for Ottawa are several instances of police raids on indigenous protests in recent decades that turned deadly.

Andrew Scheer, the outgoing leader of the federal Conservative Party, called Trudeau’s speech in Parliament on Tuesday a “word salad” and “the weakest response to a national crisis in Canadian history.”

He accused “radical activists” of holding the economy hostage. Scheer was criticized last week for calling on the demonstrators to “check their privilege.”

Trudeau said finding a solution will not be “simple.”

“On all sides, people are upset and frustrated. I get it,” he said. “It’s understandable because this is about things that matter: Rights and livelihoods, the rule of law and our democracy.” 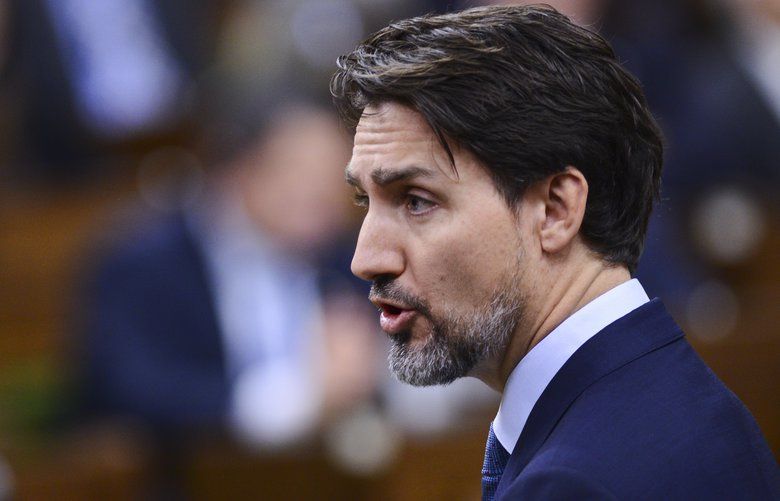 Trudeau urges patience, warns against force in rail protests
This story was originally published at washingtonpost.com. Read it here.