In 1453, Dmitry Shemyaka, the grand duke of Moscow, sat down to a chicken dinner. For 12 days afterward, he suffered in agony, then died. His chef, bribed by a rival, had put arsenic in his meal, historians say.

By and large, poisoning one’s enemies has fallen out of favor. But in Russia the threat persists, especially for well-known critics of Russian President Vladimir Putin.

The suspected poisoning of opposition leader Alexei Navalny this week fits an established pattern. Navalny, 44, fell ill on Thursday after boarding a flight in a Siberian airport. His staff says he has been poisoned and wants him treated in another country. As he lay in a coma, officials at first denied and then approved his transfer abroad. 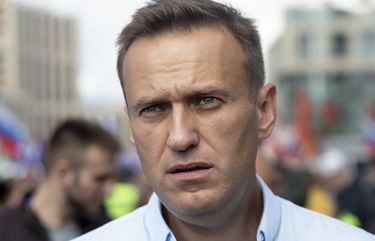 Russia to let dissident in coma fly to Berlin for treatment

Poisoning may seem like an archaic way to kill, especially when other Kremlin critics have been gunned down. But the confusion and intrigue the method fosters may be the reason it remains in use.

“If you’re a regime that is willing to kill enemies at home and abroad, you have to decide on your priorities: ease, subtlety or theatricality,” said Mark Galleotti, the director of the London-based firm Mayak Intelligence. “For the second and third, poison is often a good bet.”

Critics of the Russian government point toward Putin, a former Soviet spy, as the one who bears ultimate responsibility for the killing of his opponents. While there is scant evidence tying the Russian president directly to poisonings, many argue he encourages a lawless atmosphere where allies feel that such measures are at minimum condoned.

“Whether or not Putin personally ordered the poisoning, he is behind any and all efforts to maintain control through intimidation and murder,” said John Cipher, a former CIA station chief in Moscow.

Whether or not Putin personally ordered the poisoning, he is behind any and all efforts to maintain control through intimidation and murder.”
– John Cipher, former CIA station chief in Moscow

Navalny has no shortage of enemies. But poisonings require specialized knowledge and complicated planning.

“No matter whether it’s an attempted murder or just scare tactics, poisonings are pretty much always somehow connected to the security services,” Tatiana Stanovaya, a nonresident scholar at the Carnegie Moscow Center, wrote in a public post to Telegram.

In 2004, during Putin’s first term as Russia’s leader, investigative journalist Anna Politkovskaya claimed she had been deliberately poisoned after drinking a cup of tea on a domestic flight.

She survived. Less than two years later, Politkovskaya was gunned down outside of her apartment in Moscow. Though five men were ultimately sentenced for carrying out the killing, no one has been charged for ordering it.

Opposition activist Vladimir Kara-Murza Jr. maintains that he was poisoned twice, in 2015 and 2017. The first time he suffered acute kidney failure and the second he was placed in a medically induced coma.

“Apart from its sadism — excruciating pain and, in case of survival, lasting health effects and a long and difficult road to rehabilitation — this method gives the authorities plausible deniability,” Kara-Murza wrote in an op-ed for The Post.

Activist Pyotyr Verzilov was flown to Berlin for treatment after falling violently ill in 2018. He blamed Russian authorities, who denied involvement. German doctors suspected he was poisoned, but no trace of it could be discovered to explain his stay on a ventilator, in intensive care.

“My symptoms in the first hours of poisoning were VERY similar to what is happening with Navalny now,” Verzilov wrote on Twitter Thursday.

Like Verzilov, Navalny may soon is receive treatment in Berlin. Even if he were to go and remain, he would not necessarily find safety.

In 2006, former Russian spy Alexander Litvinenko sipped tea during a meeting with two other former Russian agents at a hotel in central London. The 43-year-old had lived in exile in England since 2000 after becoming a Putin critic.

Soon after the encounter, Litvinenko became sick, and was hospitalized for three weeks. “His vital organs were being destroyed in a sequential pattern,” Amit Nathwani, a member of Litvinenko’s medical team, told the BBC.

British investigators later concluded that Litvinenko had been poisoned with radioactive polonium-210, which was slowly killing him from within. He died of acute radiation syndrome.

A British inquiry concluded that Russian agents were behind his death, and that Putin had likely approved the hit. The Kremlin denied it.

Another suspected Russian poisoning attempt took place on British soil 12 years later. The apparent target, a former Russian spy named Sergei Skripal, survived, but both he and his daughter were left ill from Novichok, a military-grade nerve agent, and a man not related to the pair died.

Andrei Soldatov, a Russian journalist who co-authored a booked about Russian exiles, said Moscow and its allies had used poison to target dissidents abroad during the Cold War. In one notorious example, Soviet spies were suspected to have aided a Bulgaria plot that used a poison-tipped umbrella to kill a dissident writer in London.

“The old Soviet KGB refined this strategy to perfection,” said Soldatov. “Poison is unique in that its victim does not suffer alone. Their relatives and friends share the horrific experience of the loved one’s suffering.” As does public, if they follow the story in the media.