JERUSALEM — Violence in Gaza Strip escalated Tuesday after a night of Israeli airstrikes. At least 26 Gaza residents have been killed by the strikes since sundown Monday, according to Palestinian officials and Israeli media. Among the dead are nine children, according to Gaza’s Ministry of Health, and 15 Hamas militants, according to the Israeli military.

Palestinian militants retaliated by launching a heavy barrage of missiles Tuesday, killing at least two Israelis in the coastal city of Ashkelon.

Just one day earlier, Monday saw a rapid escalation of violence between Israelis and Palestinians after weeks of clashes and demonstrations in Jerusalem. 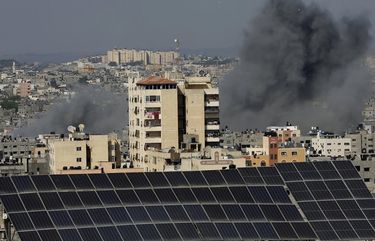 In the morning, 300 Palestinians were injured in a police raid on the al-Aqsa Mosque compound in Jerusalem, one of the holiest sites in Islam. By the evening, militants in the Gaza Strip had fired rockets toward Jerusalem for the first time in years, and Israel responded with airstrikes.

A confluence of factors — some decades old, others more immediate — has contributed to the surging volatility and violence.

Here’s what you need to know.

Q: What clashes have erupted in Jerusalem in recent days?

A: Monday began with more than 300 Palestinians — who had come to pray at al-Aqsa Mosque in Jerusalem’s Old City during the holy month of Ramadan — injured in clashes with Israeli forces, who fired rubber bullets, tear gas and stun grenades. Confrontations between Israeli police, Palestinian protesters and far-right Jewish Israelis continued throughout the day.

The city remained tense ahead of a contentious march by nationalist Jews, which was set to pass through Palestinian neighborhoods as part of a flag-waving Israeli holiday, Jerusalem Day. The route was to include Damascus Gate, one of the few centers of Palestinian life in the contested city. In recent weeks, Israeli forces and Palestinians have clashed over Israeli restrictions on nightly gatherings there after the Ramadan fast.

Soon before the march was due to proceed, Israeli authorities ordered it rerouted from the Damascus Gate area. Organizers called it off in protest but said participants should still gather at the Western Wall, the holiest site in the city for Jews, situated below al-Aqsa Mosque, which Jews call the Temple Mount compound.

That was around the same time that Hamas, an extremist group that controls the Gaza Strip, announced that it would fire rockets if Israeli settlers did not withdraw from al-Aqsa Mosque and Sheikh Jarrah, a predominantly Palestinian neighborhood of East Jerusalem where Arab families are facing evictions after years of court battles waged by Israeli settlers. The area has seen nightly confrontations between Israeli far-right nationalists and Palestinians, who have faced a heavy-handed police response

On Monday evening, Hamas fired rockets toward Jerusalem and southern Israel. Israel responded with airstrikes that continued into early Tuesday morning, and were met with even more fire. The Israel Defense Forces said that one rocket was being fired toward Israel every three minutes on average.

Additional skirmishes broke out in the West Bank on Tuesday, resulting in hundreds of arrests and at least one Palestinian fatality.

Q: What’s behind the escalation?

A: Israeli Prime Minister Benjamin Netanyahu is fighting for his political survival after four recent deadlocked elections that have left Israel in political turmoil. He is at the helm of a caretaker government as he fights corruption charges, while opposition parties struggle to form a viable alternative government.

The prime minister has aligned himself with far-right politicians. Among them are Itamar Ben-Gvir, head of the extremist Jewish Power party, who has been part of the confrontations in Sheikh Jarrah and around the Temple Mount.

Netanyahu’s critics say tensions have in part been permitted to escalate because he was distracted by these other affairs. Reports of violence targeting Jewish Israelis and soldiers have dominated Israeli media in recent days.

For Palestinians, several recent developments have stoked fears and frustrations over the future of their demands for sovereignty and rights in Jerusalem and an end to the Israeli occupation.

In late April, President Mahmoud Abbas, head of the Palestinian Authority, which has control over some parts of the West Bank, announced he was postponing what were supposed to be the first Palestinian elections in 15 years. In theory, the elections were to take place in the Israeli-occupied West Bank, Gaza Strip and East Jerusalem. But Abbas is at odds with Hamas, which rules in Gaza, and Israel has barred the Palestinian Authority from operating in East Jerusalem, where most Palestinians are not Israeli citizens. Abbas, who was lagging in polls, blamed the cancellation on Israel, saying it had not agreed to a mechanism for East Jerusalemites to vote.

Against that backdrop, Israeli restrictions around access to the Damascus Gate and al-Aqsa Mosque, the third-holiest site in Islam, became flash points as many Palestinians gathered there to observe the holy month of Ramadan. The odor of putrid-smelling “skunk water” sprayed by Israeli security forces has lingered in parts of East Jerusalem for weeks.

Conflicts around al-Aqsa Mosque have frequently flared up before, igniting tensions around the Middle East. But in recent days, international attention has also increased around the decades-old legal battle in Sheikh Jarrah, where a group of Israelis is trying to evict and replace mostly refugee Palestinian families from homes they’ve lived in for decades. Palestinians say the case is emblematic of their displacement from Jerusalem. Palestinians citizens of Israel, as well as Palestinians in the West Bank and neighboring Arab countries, have been holding protests in solidarity with Sheikh Jarrah.

A final ruling by the Supreme Court was originally set for Monday — but it was postponed Sunday by Israel’s attorney general in an effort to de-escalate tensions.

In the meantime, Hamas, which has fought three wars with Israel, has sought to fill the political void. The militant group is also facing its own pressures in the Gaza Strip, which is beset by multiple humanitarian crises 14 years into an Israeli- and Egyptian-led siege.

Regionally, relations between neighboring Jordan, who is a custodian of the al-Aqsa Mosque, and Israel are tense. That’s in part because Israel has being growing closer with Arab gulf countries like the United Arab Emirates, with whom it signed a normalization agreement in September. These developments have also angered Palestinians, who say these deals come at the expense of their rights.

Q: What could happen next?

A: Officials on both sides are bracing for the conflict to grow even more deadly. By Tuesday, the focus had shifted to whether Israel and Hamas might return to war for the first time since 2014.

Hamas continued to fire rockets into southern Israel, most of which were intercepted by Israel’s Iron Dome defense system. Schools were closed across the area as sirens rang and residents fled to shelters.

Israeli airstrikes also continued in Gaza, where civilians do not have bomb shelters. Health officials said that the strikes were adding new strain to an overwhelmed health care system that has been grappling with a surge in coronavirus infections.

The Israeli military has deployed 5,000 reservists and ramped up its presence at the Gaza border, and Netanyahu has warned that Israel intends to “increase both the intensity of the attacks and the rate of attacks.” Hamas has pledged to retaliate, while Palestinian Prime Minister Mohammad Shtayyeh has asked the United Nations Security Council to intervene.

In the past, Arab states like Egypt and Qatar have stepped in to mediate tentative cease-fires. An Egyptian official told The Associated Press on Tuesday that Cairo is working behind the scenes to negotiate a truce but that Israel’s actions in Jerusalem had complicated those efforts.