The U.S. Supreme Court considered Wednesday morning whether Washington and other states can punish or remove presidential electors who violate the will of the state’s voters, in a case that could have profound consequences for the 2020 presidential election.

The nine justices didn’t clearly foreshadow a decision, but seemed more skeptical of the argument made by Washington’s three faithless electors — that they can cast their votes however they want, no matter what millions of the state’s voters decided.

And their questioning didn’t follow any clear ideological lines, as it often does, as the more conservative and liberal justices were equally probing. The justices asked questions about bribery, about electoral chaos and about when, if ever, electors can be removed.

Those three electors, Bret Chiafalo, Esther “Little Dove” John and Levi Guerra, argued that once states have appointed presidential electors, the states have no power to control how the electors vote.

In 2016, the three electors, in a last gasp effort to prevent Donald Trump from becoming president, cast their electoral votes not for Hillary Clinton, who won Washington handily, but for Colin Powell. They hoped that by choosing Powell, a moderate Republican, they could get Republican electors from other states to abandon Trump and join them.

They were wrong. No Republican electors voted for Powell.

“We came together to truly try to represent what the founding fathers placed upon us as a responsibility,” Chiafalo said after Wednesday’s oral arguments. “I believe it was our constitutional responsibility to put our country over party.”

Chiafalo and John want to use their case as a vehicle that leads to the country abandoning the Electoral College. 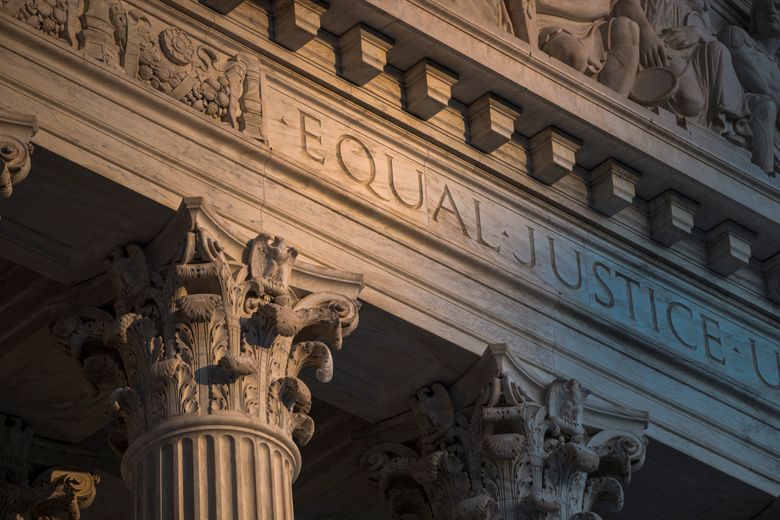 Under Washington state law, the three electors, who broke pledges they signed to support the candidate that Washington’s voters supported, were fined $1,000.

It’s that fine that is at issue before the court as it decides whether electors can vote for whomever they choose, or whether states can ensure that they follow the voters will.

Washington has since made its law stricter, and electors would now be replaced with an alternate if they attempted to go rogue. The Supreme Court, in another case argued Wednesday, is also considering a similar law in Colorado.

“Washington does not like the Constitution’s design,” said Lawrence Lessig, a Harvard law professor and founder of the electoral reform group Equal Citizens, arguing on behalf of the three “faithless electors.”

“It asks this court to read the word elector as agent or maybe minion.”

Lessig argued that electors have a moral obligation to fulfill the pledge they took, but not a legal one, and the state can’t punish them for casting their vote as they see fit.

“It’s somewhat hard to understand the concept of a pledge I’m bound to,” said Justice Ruth Bader Ginsburg, “but that promise is unenforceable.”

Under questioning from Justice Samuel Alito, Lessig said that states can remove electors who have been bribed or otherwise broken the law, but only after they’ve been convicted. So, a state could not remove an elector before the Electoral College meets to choose the president, unless a criminal trial had concluded.

Arguing for the state of Washington, Solicitor General Noah Purcell said the Constitution gives states the power to appoint electors, and inherent in that power is the power to remove them if they violate their pledge.

He said under the argument advanced by the “faithless electors,” the presidential election could be boiled down to the whims of the 538 electors.

“Every four years over 100 million Americans participate in our country’s presidential election process,” Purcell said. But, if electors are given free rein, “This entire process is irrelevant and always has been, because all that matters is who electors prefer.”

Justice Brett Kavanaugh said that the court may consider the “avoid chaos principle” in its decision.

“Judges are going to worry about chaos,” Kavanaugh said.

The court will issue a ruling by the end of June.