“I’d actually like to go back to the old times of Tudor England. I’d put the heads on pikes,” Bannon said during a live taping of his online show, “War Room: Pandemic.”

Twitter permanently suspended Bannon’s @WarRoomPandemic account on Thursday after he posted the clip, a spokeswoman told The Washington Post, citing the service’s prohibition on “the glorification of violence.” The move makes Bannon one of the most high-profile political figures to be banned. 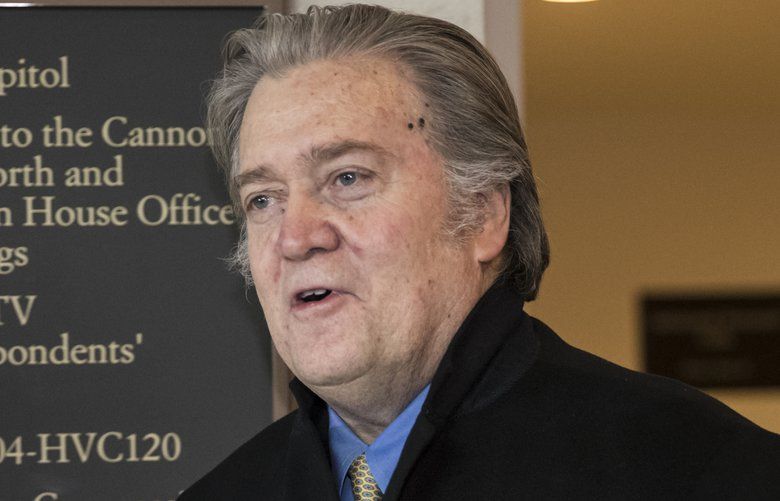 Bannon’s menacing diatribe came amid a rise of violent rhetoric from prominent Trump supporters on Thursday as the president’s chances of winning key battleground continued to narrow. Georgia state Rep. Vernon Jones, a Democrat who has endorsed Trump, said at a Thursday rally with Donald Trump Jr. that “we’re starting now to see the white in their eyes and we’re getting ready to start shooting.”

Trump Jr., meanwhile, urged his father on Twitter “to go to total war over this election.” Twitter flagged the tweet for making misleading statements about the election.

Bannon — who is out on bail after being arrested and then pleading not guilty to charges of conspiracy to commit wire fraud and money laundering in an alleged scheme to defraud Trump donors to raise funding for the border wall — made his violent threat toward Fauci and Wray on his podcast, which has chronicled the coronavirus pandemic through a pro-Trump lens.

Bannon started by calling the president “a kindhearted man and a good man” before suggesting that harsher action was warranted toward Fauci and Wray. Bannon added that the stakes bearing their decapitated heads should be placed “at the two corners of the White House as a warning to federal bureaucrats: you either get with the program or you’re gone.”

For much of the pandemic, Trump has undercut Fauci’s warnings on the seriousness of the coronavirus and contradicted Fauci’s sentiments that the pandemic is worsening. Trump’s feud with Fauci reached a crescendo on Monday, when he responded favorably to a crowd at a South Florida rally calling for him to “Fire Fauci!”

“Don’t tell anybody, but let me wait until a little bit after the election,” said Trump, followed by approving cheers from the crowd. “I appreciate the advice.”

Trump has had a similarly fraught relationship with Wray. The Post reported last month that the president was considering firing the FBI director over frustrations that federal law enforcement were not delivering a last-minute boost to his campaign as they did in 2016 when they reopened a probe into Hillary Clinton’s emails. Trump, The Post reported, had hoped the FBI would announce a similar last-minute announcement of an investigation into Biden and son Hunter.

Spotify removed the podcast episode and YouTube, which gives accounts three strikes before it gets terminated, also removed the clip for breaching a similar policy against inciting violence and for making volatile threats against individuals. Although the podcast’s YouTube page is still up, the strike disables the user’s ability to upload content for a week.

“We will continue to be vigilant as we enforce our policies in the postelection period,” Alex Joseph, a YouTube spokesman, said in a statement to The Post.

Maxey, Bannon’s co-host, took to his Twitter to express his grievances over the ban. “How does Twitter determine for whom their rules apply?” he wrote. “Because, we are all striving for equality before the law.”

Jonathan Greenblatt, the chief executive of the Anti-Defamation League, said the social media platforms were correct in taking down the “dangerous rhetoric.”

“These are shocking calls for violence from ex-WH aide Steve Bannon,” he wrote on Twitter. “There is no place for these types of threats anywhere.”