WASHINGTON — President Donald Trump on Wednesday threatened to “hold up” federal funds to Michigan and Nevada in response to the states’ planned use of absentee and mail-in ballots in upcoming elections as a means to mitigate risk of exposure to the coronavirus.

In morning tweets, Trump did not specify which funds he might withhold, and he has not always followed through with similar threats. But his message comes as many states grapple with how to safely proceed with elections.

Amid the pandemic, Trump has repeatedly railed against mail-in voting, claiming with scant evidence that it is subject to widespread fraud and has hurt Republicans in previous elections. 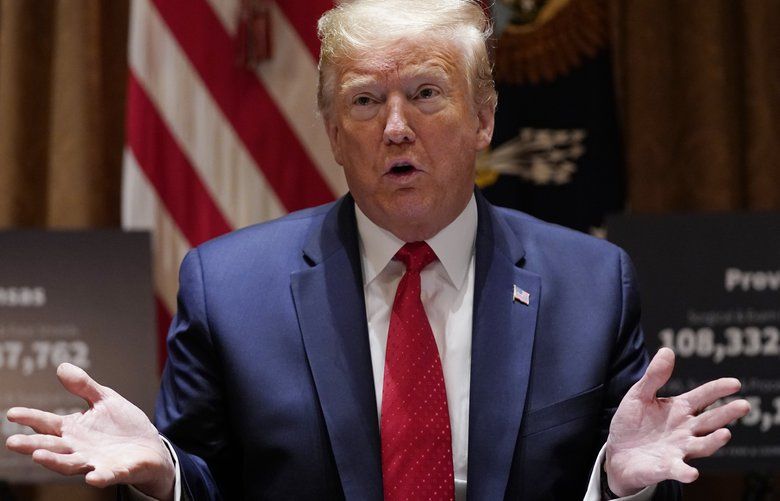 Trump's claims about 'illegal' voting in Mich., Nev., are far from reality

Trump took aim at Michigan a day after its secretary of state announced a plan to send absentee ballot applications to all of its 7.7 million voters for the state’s primary elections in August and general elections in November.

“Breaking: Michigan sends absentee ballots to 7.7 million people ahead of Primaries and the General Election,” Trump wrote in his tweet, incorrectly describing the move to send applications for ballots. “This was done illegally and without authorization by a rogue Secretary of State. I will ask to hold up funding to Michigan if they want to go down this Voter Fraud path!”

Trump tagged the Treasury Department among others in his tweet.

Michigan Democratic Secretary of State Jocelyn Benson responded to Trump with a tweet of her own, noting she has a name.

“It’s Jocelyn Benson,” she wrote. “And we sent applications, not ballots. Just like my GOP colleagues in Iowa, Georgia, Nebraska and West Virginia.”

In announcing the decision Tuesday, Benson said that by mailing applications, “we have ensured that no Michigander has to choose between their health and their right to vote.”

Trump’s threat Wednesday came as Michigan was responding to unprecedented flooding after a pair of dams in Midland County collapsed following record rainfall.

More than an hour later, he issued a similar threat toward Nevada, which has moved to a largely mail-in system for its upcoming June 9 primary.

“State of Nevada ‘thinks’ that they can send out illegal vote by mail ballots, creating a great Voter Fraud scenario for the State and the U.S.,” Trump said in his second tweet. “They can’t! If they do, ‘I think’ I can hold up funds to the State. Sorry, but you must not cheat in elections.”

Nevada Secretary of State Barbara Cegavske, a Republican, introduced the vote-by-mail initiative in March in response to the ongoing coronavirus outbreak.

At the time, Cegavske said the decision was made “because of the many uncertainties surrounding the COVID-19 pandemic” and after “extensive conversations” with Nevada’s 17 county election officials.