WASHINGTON – President Donald Trump on Thursday signed an executive order that could open the door for the U.S. government to assume oversight of political speech on the Internet, a broadside against Silicon Valley that a wide array of critics derided as a threat to free speech.

The new directive seeks to change a federal law that has spared tech companies from being sued or held liable for most posts, photos and videos shared by users on their sites. Tech giants herald these protections, known as Section 230, as the bedrock of the Internet. But Trump repeatedly has argued they allow Facebook, Google and Twitter to censor conservatives with impunity – charges these companies deny.

“We’re here today to defend free speech from one of the greatest dangers,” Trump said before signing the document.

The order signed Thursday encourages the Federal Communications Commission to rethink the scope of Section 230 and when its liability protections apply. The order also seeks to channel complaints about political bias to the Federal Trade Commission, an agency that the White House has asked to probe whether tech companies’ content-moderation policies are in keeping with their pledges of neutrality.

Section 230: the little law that defines how the internet works

The order additionally created a council in cooperation with state attorneys general to probe allegations of censorship based on political views. And it tasked federal agencies with reviewing their spending on social media advertising.

While Trump has threatened to penalize tech companies for years, his signing of the order Thursday came in response to a decision by Twitter earlier in the week to mark two of his erroneous tweets with fact-checking labels. The small move set off a firestorm of tweets by the president threatening social media companies with regulations and other punishments.

Trump’s directive now could set the stage for federal regulators to write new rules and issue new punishments for companies deemed to exhibit political bias. Depending on how the order is carried out, it poses the potential for wide-ranging consequences for a much broader segment of the Internet beyond just the social media giants, potentially affecting every website, app or service where users congregate online with new liability for the content on their platform.

Already, tech companies are quietly discussing whether to fight back with a lawsuit challenging the executive order, according to two people familiar with the deliberations who spoke on the condition of anonymity because no decision has been made. 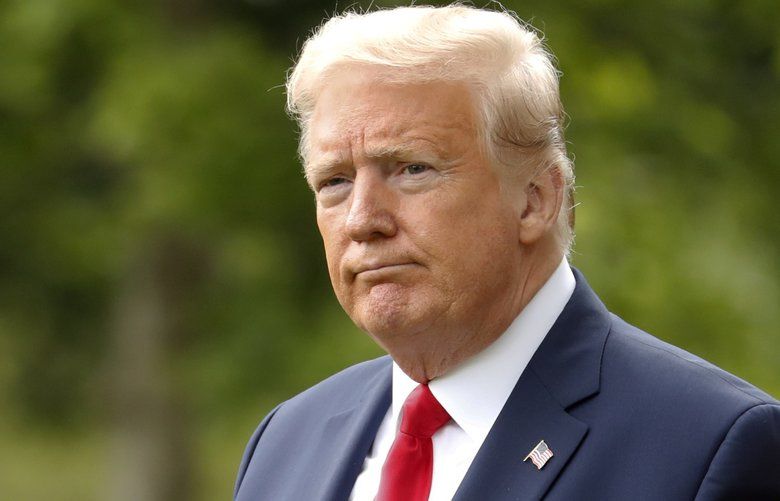 Legal experts said the directive will almost certainly be challenged in court, arguing it threatens to undermine the First Amendment. A wide array of critics in Congress, the tech industry and across the political spectrum also accused the White House of deputizing government agencies to carry out Trump’s personal vendettas.

“This is simply setting the wheels of law enforcement and regulation in motion against a private company for questioning the president,” said Matt Schruers, president of the Computer and Communications Industry Association, a Washington trade group that represents Facebook, Google and other major tech companies.

Facebook spokeswoman Liz Bourgeois said in a statement that the company believes in protecting freedom of expression along with protecting users from harmful content.

“Those rules apply to everybody,” she said. “Repealing or limiting Section 230 will have the opposite effect. It will restrict more speech online, not less.”

Google spokeswoman Riva Sciuto said in a statement that undermining Section 230 could hurt the economy and the United States’ role in Internet freedom.

“We have clear content policies and we enforce them without regard to political viewpoint,” she said. “Our platforms have empowered a wide range of people and organizations from across the political spectrum, giving them a voice and new ways to reach their audiences.”

Executives and lobbyists at social media companies were taken by surprise by Trump’s order, according to two people who spoke on the condition of anonymity because the companies were still formulating their responses. Internally, some Silicon Valley leaders viewed the policy as a political move that might not withstand legal scrutiny. Still, they expressed an early openness to challenging the executive order in court, the people said.

For now, though, Trump’s order may prove difficult or impossible to enforce, experts said even before the president had signed it. But it could have far-reaching consequences, amplifying the Trump administration’s power over social media companies as the country gears up for the 2020 election, some critics cautioned.

“Donald Trump’s order is plainly illegal,” charged Sen. Ron Wyden, D-Ore., one of the authors of the law that includes Section 230. He added the president sought only to “bully companies like Facebook, YouTube and Twitter into giving him favorable treatment.”

The order marks the White House’s most significant attempt to rein in the tech giants after years of threats to do so from Trump and his top deputies. It also reflects the delicate, four-year dance between a president who is one of the most popular social media users in the world and the very sites and services where he broadcasts his views.

For years, Trump has accused tech giants of engaging in political censorship, at times pointing to their roots in the liberal-leaning San Francisco Bay area. He’s accused Twitter CEO Jack Dorsey of limiting his followers, grumbled about Google search results and suggested at times the tech industry has sought to undermine his reelection.

Speaking in the Oval Office, Trump on Thursday again blasted the tech industry broadly for having amassed “unchecked power.” Attorney General William Barr added the Justice Department is helping to assemble legislation that might further regulate the industry, perhaps holding it liable for the content that companies choose to leave online or take down.

It’s not only the White House seeking to rein in tech. States attorneys general and Congress over the past year have launched probes into tech giants’ market power, and they are expected to file antitrust lawsuits targeting Google as soon as this summer. Arizona’s attorney general just this week sued the search giant for privacy violations, adding to a growing chorus of regulators around the country who criticize the company and its peers for the way they protect users’ personal information.

But any regulation that implicates speech – especially political content online – threatens to raise a raft of thorny constitutional issues. Those concerns long have stymied other U.S. lawmakers who similarly have hoped to hold social media companies accountable for the way they police content online. The 26 words that comprise the heart of Section 230 date back to 1996, before the Internet had taken off in popularity. It spared major digital services from lawsuits targeting them for what takes place on their platforms, while at the same time permitting them to do content regulation.

But the legal shield has taken on wider implications as the tech sector has grown over the past two decades, offering a shield to a wider array of companies, including Amazon, whose third-party sellers hawk counterfeits, and the ride-hailing service Uber, which contends it isn’t responsible for sexual assaults that take place in the company’s rides.

Democrats have tried to force the companies to better police hate speech, election falsehoods and other abusive content, threatening to strip social media sites of their liability protections if they don’t more aggressively police the Web. Republicans, meanwhile, have long charged the companies are liberally biased and have systematically suppressed right-leaning voices, although the companies have denied those claims. In doing so, they threatened for years before Trump’s executive order to revoke Section 230 as punishment for these perceived biases.

Any action from the order would hinge on the FTC and FCC, two independent agencies that are supposed to operate separately of Trump’s Cabinet and his political influence. The FTC is “committed to robust enforcement of consumer protection and competition laws,” consistent with its authority. FCC Chairman Ajit Pai, a Republican, said late Thursday it would review the government’s request that the agency issue new rules on the matter.

The executive order touched off widespread opposition, uniting Democratic lawmakers, digital experts, longtime conservative-leaning advocacy groups and a bevy of free speech activists, most of whom cited free speech protections. Many agreed it could amount to government interference in private speech, a violation of the First Amendment.

“Social media can be frustrating,” Jessica Rosenworcel, a Democratic federal communications commissioner, said in a statement. “But an executive order that would turn the Federal Communications Commission into the president’s speech police is not the answer.”

Twitter’s move earlier this week to label the president’s tweets on mail-in ballots, directing users to news outlets, marked a major shift for the social media company. For years, Twitter had allowed Trump and other politicians to share views unfettered even if they amount to misinformation, believing that even the most controversial tweets maligning rivals and other users served the public interest.

Since it started fact-checking on Tuesday, Twitter doubled down and added its label to hundreds more tweets, including a Chinese government account touting false information about the coronavirus and an account that manipulated an image purporting to show the officer who killed George Floyd.

The president’s order “reeks of political self-interest – the idea that we are proposing to regulate a platform because they started fact-checking? There’s no one’s free speech rights being infringed on,” said Phil Napoli, a professor of public policy at Duke University who researches media institutions, media regulation and policy.

The threats ultimately breathed fresh life into a long-running debate, years in the making within the West Wing, over a need for an executive order targeting political speech, according to two people familiar with the White House’s thinking who spoke anonymously to describe private conversations. Even before the executive order had been signed, DOJ had been at work on reevaluating Section 230, which Barr publicly has criticized in the past.