The tributes to Rep. John Lewis poured in Saturday morning, as leaders from across the political spectrum expressed gratitude and reverence for the civil rights icon’s commitment to racial justice, even at great personal cost.

“I first met John when I was in law school, and I told him then that he was one of my heroes. Years later, when I was elected a U.S. Senator, I told him that I stood on his shoulders,” former president Barack Obama wrote in a eulogy on Medium. “When I was elected President of the United States, I hugged him on the inauguration stand before I was sworn in and told him I was only there because of the sacrifices he made.”

The Georgia Democrat, who died Friday at 80, spoke at the 1963 March on Washington.Lewis led the march for voting rights across the Edmund Pettus Bridge in Selma, Ala., in 1965 in what became known as “Bloody Sunday.” Lewis suffered a brutal beating by police who violently confronted the demonstrators with bullwhips and nightsticks.

It was appropriate then that his final public act was to visit the newly named Black Lives Matter Plaza on a street leading to the White House -a symbol of the progress the country has made on issues of racial justice and the work that still needed to be done. 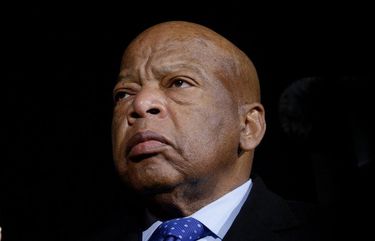 John Lewis, lion of civil rights and Congress, dies at 80

“John Lewis had faith in our nation and in the next generation,” she wrote on Twitter. “He warned us not to get lost in despair. So, in this moment of grief, we are hopeful – we are hopeful that, collectively, we can live up to his legacy.”

Former vice president Joe Biden, the presumptive Democratic nominee for president, released a stirring statement on behalf of himself and his wife, Jill.

“We are made in the image of God, and then there is John Lewis,” Biden began. “How could someone in flesh and blood be so courageous, so full of hope and love in the face of so much hate, violence, and vengeance?”

“He was truly a one-of-a-kind, a moral compass who always knew where to point us and which direction to march,” Biden wrote.

“He believed America could be better, even live up to its highest founding ideals of equality & liberty for all. He made good trouble to help us get there. Now it’s up to the rest of us to carry on his work,” she tweeted.

For most of the day, President Donald Trump’s voice was missing from the outpouring. After leaving his private golf club in Sterling, Va., around 2 p.m. he tweeted: “Saddened to hear the news of civil rights hero John Lewis passing. Melania and I send our prayers to he and his family.”

Lewis skipped Trump’s inauguration in 2017, saying he didn’t see Trump as a “legitimate president.” Trump lashed out, responding in a tweet that Lewis was: “All talk, talk, talk – no action or results. Sad!”

Before Trump tweeted, Rep. Karen Bass, D-Calif., chairwoman of the Congressional Black Caucus, had implored the president not to comment on Lewis’s passing.

“@realDonaldTrump while the nation mourns the passing of a national hero, please say nothing. Please don’t comment on the life of Congressman Lewis. Your press secretary released a statement, leave it at that,” she tweeted to the president. “Please let us mourn in peace.”

White House press secretary Kayleigh McEnany made the statement on Twitter, writing that Lewis “was an icon of the civil rights movement, and he leaves an enduring legacy that will never be forgotten.”

The White House released a “proclamation” late in the morning, ordering flags at the White House and other public buildings flown at half-staff for one day as “a mark of respect for the memory and longstanding public service” of Lewis.

The statement made no other mention of Lewis or his work on civil rights.

Later, Vice President Mike Pence released his own remembrance of Lewis, praising him as a “great man” who “changed America forever.”

“John Lewis will be remembered as a giant of the civil rights movement whose selflessness and conviction rendered our nation into a more perfect union and his example will inspire generations of Americans,” Pence said. “While John Lewis will be rightly remembered as an icon of the civil rights movement, for me he was also a colleague and a friend.”

Many other Republican politicians also paid tribute to the towering figure, including Georgia Gov. Brian Kemp, who tweeted, “Our nation will never be the same without him.”

Lewis was no fan of Kemp, who Democrats have accused of suppressing black votes in his role of Georgia’s secretary of state when he ran for governor in 2018 against Democrat Stacey Abrams. At the time, Lewis accused him of abusing his power and called for him to step down.

House Minority Leader Kevin McCarthy of California shared that on Friday, in his last act of public service, Lewis co-authored a letter with McCarthy urging more money be spent on teaching civics in schools.

“Even on the last day of his life, John never stopped working to improve the lives of others,” McCarthy said.

House Speaker Nancy Pelosi, D-Calif., who served with Lewis for decades, called him “a titan of the civil rights movement whose goodness, faith and bravery transformed our nation.”

She ordered flags at the U.S. Capitol be flown at half-staff.

Many other officials and thought leaders have also released statements:

Sen. Kamala Harris, D-Calif.: “We are grateful that John Lewis never lost sight of how great our country can be. He carried the baton of progress and justice to the very end. It now falls on us to pick it up and march on. We must never give up, never give in, and keep the faith.”

Senate Majority Leader Mitch McConnell, R-Ky.: “Congressman Lewis’ place among the giants of American history was secure before his career in Congress had even begun. . . . John Lewis risked everything. He endured hatred and violence. But he kept working, because he was convinced that our nation had to be better.”

Sen. Mitt Romney, R-Utah: “With the passing of John Lewis, America has lost not only a man of history, but a man for our season; O how we need such men of unwavering principle, unassailable character, penetrating purpose, and heartfelt compassion.”

The Rev. Al Sharpton: “My friend, role model, and activist extraordinaire has passed. Congressman John Lewis taught us how to be an activist. He changed the world without hate, rancor or arrogance. A rare and great man. Rest in Power and may God finally give you peace.”

Sen. Tim Scott, R-S.C.: “He was a giant among men; his life and legacy will continue to serve as an example for the generations to come. I am encouraged by his courage, determination, and perseverance, characteristics that we can all try to emulate – especially in the wake of current events.”

Rep. James Clyburn, D-S.C.: “The country lost a hero last night. The movement lost an icon. And I lost a personal friend. But I do believe that as the sun set on John Lewis’s life last night, the sun rises on a movement that will never die. Thank you, John, rest in peace my brother.”

Senate Minority Leader Chuck Schumer, D-N.Y.: “From his very early days, John Lewis was a man on a mission, who treated every person he met with kindness and grace. Who forcefully, but gently, led us all to do more and do better. As we mourn this loss – we must also celebrate the monumental contributions of a true American hero.”