Measures to tackle crow-related problems in central Tokyo are paying off. The once ubiquitous bird — often considered a pest — is being seen less frequently following efforts by the Tokyo metropolitan government and other parties. Over the past 20 years, the capital’s crow population has fallen by two-thirds.

The decline of the notorious scavengers has been linked with improvements in the way the capital handles its refuse.

Ichiro Ozeki, 64, who runs a variety store in Tokyo’s Ginza district, recalled the situation in the area in the late 1990s, saying: “Garbage bags generated by restaurants and other establishments were raided [by the birds] every morning. They would scatter leftovers all over the roads, making it difficult for people to get around on foot.” These days, food-related establishments use covered trash bins, garbage is collected at 2 a.m., and crows are rarely seen in the district.

The urban crow population began increasing in the 1980s and peaked in around 2000. In fiscal 2001, the Tokyo metropolitan government received 3,754 complaints about the birds, including concerns about scattered waste, loud cawing and personal attacks.

In September 2001, then Tokyo Gov. Shintaro Ishihara tasked a project team with finding ways to deal with the ravenous corvids. After investigating nest numbers in 40 locations across Tokyo, the team estimated that about 36,400 crows were living in the capital.

The Tokyo government began catching them with traps, and called on municipalities to collect crow-targeted garbage in the early hours of the morning. As part of the measures, the Suginami Ward Office introduced opaque yellow garbage bags to help conceal food waste, while a company sold trash bags that were coated with a spicy-flavored substance that crows quickly grew to dislike. 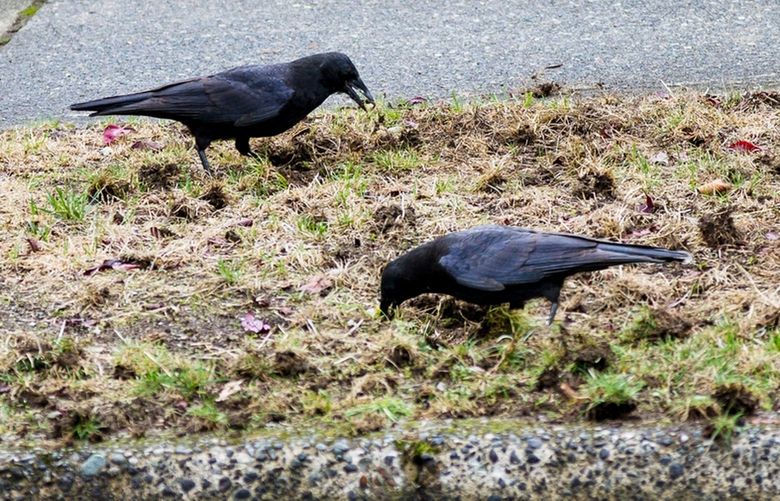 Crows have not always been so prevalent, however. In a survey conducted by the Tokyo metropolitan government from 1973 to 1978, they were not counted in significant numbers and their “bad behavior” was not seen as a particular problem.

Every five years, the Urban-Bird Society of Japan – comprising researchers and other individuals – tallies crow numbers in three Tokyo locations: the grounds of Meiji Jingu shrine in Shibuya Ward, Toshimagaoka cemetery in Bunkyo Ward, and the Institute for Nature Study of the National Museum of Nature and Science in Minato Ward.

This increase was linked to the amount of garbage generated in the capital. According to a book covering the 100-year history of Tokyo’s cleaning and waste disposal services, about 3.97 million tons of waste were collected in Tokyo’s 23 wards in fiscal 1985, jumping nearly 20% to about 4.8 million tons in fiscal 1990.

“As a result of economic growth, large volumes of food waste were placed on central Tokyo roadsides for collection as garbage,” said the bird society’s Koichi Karasawa. “Since crows were able to eat as much as they liked, they grew in number.”

A number of experts point to a drop in garbage as a prime factor in the dwindling crow population. According to the 23 wards’ special-cleaning district authority, waste has gradually declined since the 1990s. Reasons include the levying of a garbage-collection charge on restaurants and other businesses. About 2.55 million tons of waste were generated in fiscal 2020, compared to about 3.52 million tons in fiscal 2001.

Indeed, there appears to be a direct correlation between the reduction in crows and the decrease in food waste. Compared to fiscal 2001 – when the Tokyo metropolitan government first began tackling the issue – the voracious passerines had diminished by almost 50% to about 17,900 in fiscal 2005, falling further to about 11,000 by fiscal 2020 – an almost 70% percent fall on the initial tally.

With the wide adoption of bird-thwarting nets and covered trash bins, “edible waste” has decreased. Tokyo’s crow population is expected to decline still further if measures are implemented more thoroughly.

However, there is a potential downside if numbers fall too drastically: Crows consume small animal carcasses and disseminate plant seeds via droppings. Without these avian “services,” there could be an uptick in unsanitary roads, as well as effects on the local ecosystem.

Hajime Matsubara, a project associate professor at the University of Tokyo University Museum, has studied crows for more than 20 years. “If people unrestrainedly generate large amounts of waste, then crows will swell in number,” Matsubara said. “But if people [dispose of garbage] with decorum, then the bird will wane. It could be said that crows are at the mercy of human behavior.”