MYTISHCHI, Russia – For a 16-year-old Soviet girl during World War II, the first surprise after enlisting to fight the invading Nazis was the freezing, filthy stables where she was to sleep with other female trainees.

Inside was a towering heap of frozen horse manure. There was no lock on the door, just a bent rusty nail. The bathroom, piled with more manure, was unspeakable.

Much of Moscow’s bureaucracy had been evacuated in 1941 to the Volga River city of Samara, including 300 female trainees. Galina Brok-Beltsova found shovels and crowbars and led the others in breaking up the manure and cleaning up the bathroom in a few short hours, winning praise from her superiors.

Now, at 95, she is the last surviving member of Stalin’s three famous all-female air regiments and one of the dwindling cadre of World War II veterans in Russia – and among its wartime allies and foes. 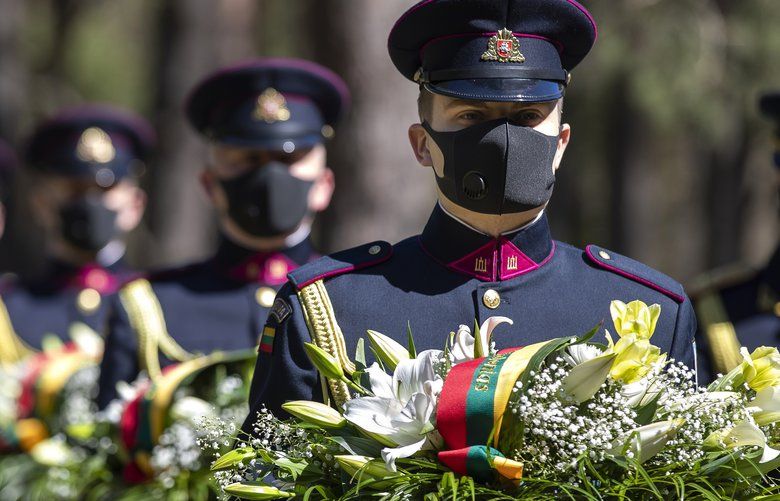 On Saturday, Russians will mark Victory Day, marking the defeat of the Nazis in 1945. It is usually the nation’s most glorious celebration – and this year President Vladimir Putin planned a particularly grandiose parade in Red Square to demonstrate Russia’s military power for the 75th anniversary. But it was postponed because of the coronavirus pandemic.

This year’s parade – to have been attended by an array of world leaders including China’s Xi Jinping and France’s Emmanuel Macron – was designed to mark a glorious symbolic moment for Putin, who recently ushered in constitutional changes that could see him rule until 2036.

Brok-Beltsova planned to be at the Kremlin for the annual luncheon with Putin, who always invites members of the thinning veterans’ ranks.

She wears a white bouffant hairdo, a gold necklace in the shape of the Pe-2 Soviet plane used by her air force regiment, a scarf with crimson splashes, transparent pink nail lacquer and liberal amounts of heavy, floral perfume.

The shelves of her home in Mytishchi – a town built for veterans about 15 miles northeast of Moscow – are stuffed with nostalgic photos. And in pride of place stands a small white soapstone bear that is part of a wartime love story.

After the Nazi invasion in 1941, the streets of Moscow were full of patriotic recruitment posters pulling at Brok-Beltsova’s conscience.

The 16-year-old was coming out of a movie with her girlfriends in central Moscow that summer when an air raid alarm sounded, signaling that residents should take shelter, and a policeman hurried them to the half-built Metro station, full of terrified women, children and elderly people. Instead, the girls marched off to the nearest military office and signed up.

“We were athletic and strong and very brave. We were maybe too brave, showing off,” she said.

Her hair was cut as short as a man’s. She was given men’s military boots four sizes too big and a uniform jacket with pockets too low to reach. But eventually they found her a boy’s short jacket and small boots.

In 1943, with female crews being shot down, there was a call for nine female trainees to volunteer early to be trained as navigatorsfor combat. Brok-Beltsova was among them and was sent to learn how to be a navigator on the “Peshkas,” the Petlyakov Pe-2 twin-engine dive bombers, the pride of the Soviet air force.

When she stood stiffly in line with the other volunteers, the officer in command, Georgy Beltsov, could not help noticing those tiny boots and short jacket, she recalled. Other women were smitten with Beltsov, but if Brok-Beltsova liked him she did not let on. When he approached her at one of the dances, she told him to find someone else and went home early.

In 1944, she was sent on a mission to the front. As her crew waited in their plane to take off for the front, he came to see her off.

“Of course I didn’t want to look at him,” Brok-Beltsova said. “I was focused on going to the front. He started to write me three letters a day.” He took a photo of a small white soapstone bear and posted it to her.

“He said, ‘This is our talisman. Please always carry this photo with you when you fly. It will keep you safe,’ ” she said.

As her 587th Bomber Aviation Regiment flew in tight formation, she perched with her parachute as a cushion, scanning the ground. But everything was confusing that first time, she recalled. Roads, villages and forests marked on the map had been blown away by war. Landmarks such as rivers were hard to make out.

“We had our mission. We were firing and hurling down bombs, but we couldn’t understand where we were,” she said.

In 1945, she took part in the battle of Konigsberg, then Germany’s easternmost city, a fortress bristling with artillery. After Soviet air and ground attacks the city was a devastated ruin. Brok-Beltsova saw it as revenge for the Nazi destruction of Stalingrad.

“That’s war. We were destroying them and conquering them because they were trying to destroy us,” she said. “They occupied our villages and towns.” Her crew bombed the heavily guarded nearby port of Pillau. They received personal thank-you letters from Stalin.

One pilot in the 588th Regiment, Klavdia Deryabina, said in a 2005 interview that speaking about the civilian victims or the mistakes was taboo in the Soviet era.

But Tatyana Sumarokova, a navigator on more than 700 missions in the 588th Regiment, awarded Hero of the Russian Federation in 1995, had an uneasy conscience for decades. One bombing mission that flattened a southern town to kill one German officer – and also cost the lives hundreds of civilians – troubled her, she said in a 1995 interview two years before her death.

“In the Soviet years, nobody ever talked about these things,” Sumarokova said at the time. “It is so personal, and everyone was suffering their hearts.”

After the war’s end, Beltsov, by then a general, came to find Brok-Beltsova where she was stationed in Penevezhis, Lithuania, and proposed marriage. He brought her the small white stone bear. But she demurred, planning to go to university.

“He said, ‘I waited the whole war for you. You, with your soldiers’ boots, you are tramping on the soul of a man who’s devoted to you,’ ” she recalled him saying. His lips trembled, she added. He was on the verge of tears.

“I was shocked,” she said. “It was a cold shower that sobered me up. I decided to change my mind.”

The wedding arrangements were hasty. There was no money to buy a goose. The only thing they had to trade for the bird was some sought-after decent underwear.

She did go to university and became a history professor. In 60 years of marriage before Beltsov’s death in 2005, she said the couple quarreled only once, when she grew upset, believing he was spending too much time at work as head of an aviation school.

Brok-Beltsova does not feel her age. She is often invited to military events and lectures, meeting handsome young officers who seem to worship her courage.

For Brok-Beltsova, Victory Day carries the same message of glory, triumph and grief as it always has.

“I was young. We were sent to the military, and we went to funeral after funeral. We were jumping from our planes,” said Brok-Beltsova. “We were burning. Women died.” She won six state honors and 18 medals.

The Washington Post’s Natasha Abbakumova contributed to this report.