Think of locusts as giant, hormonally charged, very hungry grasshoppers. They can move more than 100 miles in a day, depending on the wind.

Governments and U.N. agencies have repeatedly warned that locusts will cause calamitous food shortages if they end up on cropland. “It is a race against time to ensure these new swarms do not breed,” said Hamisi Williams, a senior Food and Agriculture Organization official in Kenya. “When this happens, we will be talking about the locusts at plague level.”

Tens of thousands of liters of pesticides have been delayed in reaching the region because of border closures caused by the coronavirus pandemic. 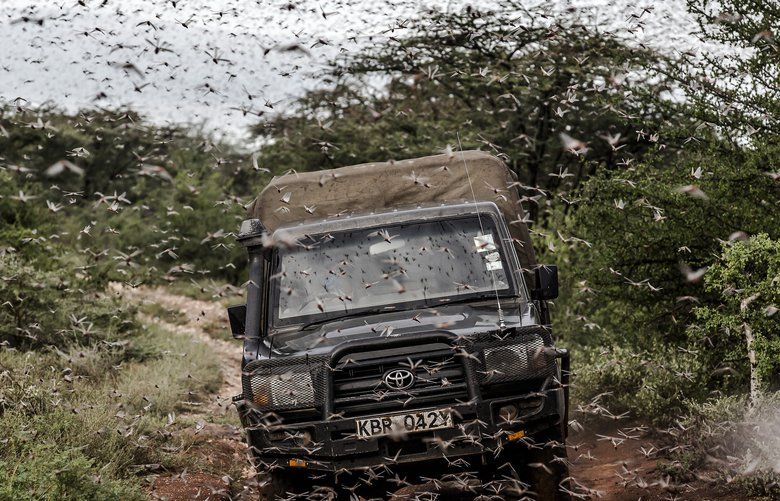 Luck, in the form of favorable winds, has so far been on the farmers’ side, and the swarms have mostly been pointed toward the vast open ranges of northern Kenya and southern Ethiopia. But with tens of millions of people in the wider region already dependent on food aid, a humanitarian crisis, or even famine, could can happen quickly.

Herding communities like the Samburu in northern Kenya fear that once the rains end, a final generation of locusts will decimate the rangeland, leaving their cattle, goats, donkeys and camels to die of hunger. Samburu locals like Albert Lemasulani guide surveillance missions and know the land from herding on it for decades.

Weather conditions are expected to be favorable for locust breeding over the next three months. There are 18 swarms in Kenya right now. Regional governments have appealed for financial assistance, but with attention almost totally consumed by the covid-19 pandemic, locusts have tumbled down the priority list.

The locusts and the coronavirus seem to be converging toward a catastrophe if a third generation is able to hatch in June and July.