Skip to content
By
COLIN MOYNIHAN
The New York Times

NEW YORK — The images could have come from the scrapbook of any relatively affluent couple: a graying man and slightly younger woman in casual, unrehearsed moments — standing on a wooden footbridge, astride a motorcycle, at a table with a drink.

What sets them apart are the people they depict: Jeffrey Epstein, a disgraced financier who killed himself in a federal jail cell in 2019 while he was being held on sex-trafficking charges, and Ghislaine Maxwell, his onetime girlfriend who is currently being tried on sex-trafficking and other charges in U.S. District Court in Manhattan.

More than a dozen of the photographs were displayed last week during Maxwell’s trial, showing the carefree surface of a relationship that, according to witness testimony, masked much darker depths. They were introduced by the government over defense objections, as prosecutors sought to document, through the images, Maxwell’s long-standing relationship with Epstein.

Now, as the defense presents its case, lawyers for Maxwell will attempt to convince jurors that the woman in the pictures is little more than a scapegoat for Epstein, one of the most notorious sex offenders in recent American history. 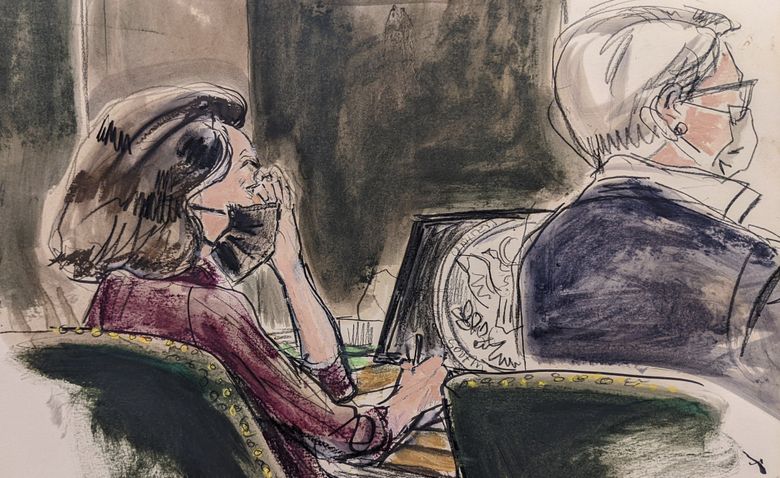 Maxwell’s lawyers have not said publicly whom they will call to testify, but they said they will put on a case that is expected to last no more than four days. In court filings, they suggested that they want to present at least one expert witness to counter testimony from an expert called by the government who described a process known as “grooming” that is used by sexual predators to target victims and acclimate them to abuse.

But the timeline implies that Maxwell herself is unlikely to testify, and jurors will not hear firsthand about her relationship with Epstein, which in many ways is at the center of the case.

Four women have testified that when they were teenagers, Maxwell helped prime them for abuse by Epstein, with two saying she pretended to be a friend or mentor introducing them to her life of money and glamour. The government has contended that Maxwell was Epstein’s “best friend and right hand,” even after a “personal intimate relationship” ended. She was described during an opening statement as his willing accomplice: Maxwell, a prosecutor said, “walked the girls into a room where she knew that man would molest them.”

The photographs shown in court are part of a trove found in 2019, when FBI agents searched Epstein’s town house on the Upper East Side of Manhattan, where some of that abuse was said to have taken place. Prosecutors said at the time that the authorities had seized hundreds of pictures of nude or partially nude young women and girls, some of which had been stored in a safe.

Defense lawyers objected last week to the photographs of Epstein and Maxwell being shown in court, saying that there was no testimony that the images were unaltered and suggesting that it was not necessary for the government to enter multiple pictures into evidence.

“You don’t need 20 photographs to say what two might just as well say,” one of Maxwell’s lawyers, Laura Menninger, argued.

But a prosecutor, Alison Moe, told the judge overseeing the case that the relationship between Maxwell and Epstein “is central to this case.” Because the defense had “repeatedly tried to distance Ms. Maxwell from Mr. Epstein and his affairs and argue that things were compartmentalized,” she said, a large number of photos were needed to show that Maxwell had been more than a functionary in Epstein’s world.

“These photographs show their close relationship throughout time,” Moe said. “Given the change in hairstyles, the people in the photographs are clearly aging.”

Judge Alison Nathan agreed, and the next day, the pictures were being flashed onto a screen in the courtroom, visible to jurors and the public and offering a glimpse into part of Maxwell and Epstein’s private life together.

Many of the photos, introduced by an FBI analyst, Kimberly Meder, show mundane scenes. Some capture moments of affection or intimacy. Maxwell is depicted embracing Epstein near a jetty or pier, kissing him on a sidewalk and massaging his foot aboard a plane.

A few are portraits of privilege, hinting at the moneyed circles in which Epstein and Maxwell traveled. There was, for instance, Maxwell wearing a blue plaid shirt and lounging on a porch with Epstein in a photograph that the BBC said appeared to have been taken at a royal estate in Scotland.

Another shows Maxwell in tartan and Epstein in black tie, with a wood-paneled wall behind them. A third shows them both wearing what look like shooting clothes while sitting in a grass field with a dog. Maxwell is smiling. Epstein, holding a pair of headphones and wearing a pair of tall green boots, looks more serious.

Just as the photos provide little insight into the inner lives of Maxwell and Epstein, their potential impact on the jurors is difficult to assess.

One photo shown to the jury was entered into evidence under seal, meaning members of the public may not see it. Meder offered no details of what it depicted.

But a pretrial motion filed by prosecutors identified that image as a photograph of Epstein and Maxwell “swimming together while nude.”

The picture was “relevant to the relationship” between the two, prosecutors wrote, adding, “To the extent the defense at trial argues that the defendant was merely an employee of Epstein’s, this photograph is evidence to the contrary.”