IDLIB, Syria – The market bombing had driven Ahmed and his family from their town in southern Idlib province and onto the road, joining hundreds of thousands of other people searching for safety, the teen recalled. A Russian plane had circled overhead and then the bombs fell, obliterating a car, its driver and other people who were passing by on motorcycles.

The attack a few weeks ago was terrible but hardly the worst he had seen. Five years ago, another airstrike had killed dozens of people in the town square.

Now, at age 13, Ahmed is living in the clammy basement of a sports stadium in Idlib city, with hundreds of other displaced people who have crowded in over recent weeks. As he spoke, warplanes could be heard circling overhead again. Guards warned people to stay indoors. But Ahmed didn’t flinch, the stoic survivor of a war and no longer a child.

“Safety comes from God,” he said.

The last month has been especially brutal in Idlib, with a Syrian government offensive producing a humanitarian crisis almost unparalleled during nearly a decade of war in Syria. As Syria seeks to recapture rebel-held Idlib, overwhelmingly populated by children, the fighting has chased about 1 million people from their homes. Many had previously fled to the province from elsewhere in the country, and they are now trapped between the approaching battlefront and a sealed Turkish border to the north.

The offensive, waged during some of the worst winter weather in years, has offered a lesson in the endless ways young people can be made to suffer – as victims of the violence, war refugees or because of the awful things they have witnessed. Infants have died in the cold or suffocated in their tents as their parents try to keep them warm. Children have withered away because of severe malnutrition as their parents desperately search for food. In bedrooms or schoolyards, they have been blasted by airstrikes or artillery shells.

Parents who spoke to reporters during a rare visit to Idlib this week said their children have also struggled with the mental toll of the violence and have become withdrawn or alarmingly aggressive.

Everywhere in Idlib there are children: cleaning their tent encampments, picking through trash for food and, when there is time, stealing a few moments to play.

Children account for more than half of the province’s 3 million people, according to Save the Children, making them frequent targets of what human rights activists have said are indiscriminate attacks on civilians carried out by the Syrian government and its Russian allies.

The Syrian government of President Bashar Assad has justified its offensive in part by saying the campaign is aimed at defeating Islamist extremists who largely control Idlib and nearby areas. Russia is trying to help its ally recapture all of Syria, nine years after a revolt erupted against Assad’s rule.

Assad’s forces have directly targeted children, including on Tuesday, when they attacked at least 10 schools in Idlib, according to the Syrian American Medical Society, or SAMS, which supports hospitals in the province. At least 20 civilians were killed in attacks throughout the day. Half were children, the group said.

“It feels like death is around us, everywhere,” said Ikrem, a doctor at a maternal hospital in Idlib city supported by SAMS.

“There is no food. There are no houses. There is no good mental structure,” she added. She asked that her last name not be published because she expects Assad’s forces will control Idlib province soon.

At least two newborns have frozen to death in recent weeks, she said. “Every day, there are large numbers of child injuries.” Mothers arrive at the hospital after spending long periods in displacement camps, in “a very poor maternal condition,” she said. Low birth weight and preterm babies are common.

In one of the hospital’s incubators, an infant was recovering from severe hypothermia, doctors said. The boy’s forehead was scarred with black splotches, as if he had been burned. The skin on his chest was peeling. The infant had no name, or none that the doctors were aware of.

His mother, named Dima, had died during childbirth about a month ago, along with the boy’s twin sister. His father was displaced by fighting and had failed to find a warm place to shelter for what remained of his family.

Ikrem said she had been struggling herself to reassure her own children that their house would not be bombed.

“I’m in a bad mental condition,” she admitted.

Just as she spoke, warning alarms sounded in the hospital, indicating that warplanes were overhead. Other doctors rushed indoors.

Dozens of children have been sheltering for weeks with their families in two caves in Idlib’s western countryside. When the families arrived, they had to excavate mounds of soil and rock to make the caves livable.

The caves are barely that. For weeks, there has been no heat. The moisture has given everyone chest infections. The conditions have been especially difficult for Shams, an 11-year-old girl with a heart defect that left her short of breath, even in the best conditions.

“It hurts here, when I walk,” she said, placing her hand on her chest.

She talked about school; her favorite subjects had been Arabic and math. But there was no time for school now. There had not been for years. She had reached only the third grade.

“Their favorite subject now is bread,” said Kamal Wilfi, a father in the cave who cradled his 5-year-old son, Mohammed. The boy suffers from a blood condition, and his growth has been stunted. In his father’s arms, swaddled in a blanket, he looked no older than 2.

“His situation is not good,” the father said. They had just returned from the clinic, but Wilfi said he had not been able to afford the medicine that prevented his son’s seizures.

Outside the caves, laundry was suspended from a long line strung between olive trees. There was one toilet. There were snakes and scorpions in the fields. “We have killed many,” said Nazim, a 14-year-old boy. “Nothing here is good.”

No one thought they would be able to return home soon.

“Our hope is very weak,” said Ahmed Hassan, 16, who moved to one of the caves after spending weeks in a basement with his family. Before they had fled their town of Saraqeb, a shell had landed behind his house, destroying a neighboring dwelling.

“Thank God that family was displaced,” he said, as other children huddled around him to listen.

Walkie-talkies, carried by guards at the cave camp, crackle with the latest warning of an air attack.

“Don’t gather, children, don’t gather,” a man urged, a warning as effective as telling the youngsters not to breathe.

Everywhere and always in Idlib, there is the thunderclap of shelling or the menacing roar of the jets.

The sounds of shelling rise above the din in the courtyard of the Future Generations orphanage in Idlib city, where workers try to distract children who have lost parents with songs and games.

Booms echo in the basement of the Idlib stadium, shaking Ibtisam Hamoudia, who survived an airstrike a few weeks ago and worries that her children would never be the same.

“It’s a kind of psychological injury,” she said as Hassan, her 8-year-old son, began shoving one of his sisters, again and again, until the sister began to cry. “They became aggressors,” their mother said.

The sounds of war also haunt the family of 2-year-old Mohamed Hassan Agha and his infant sister, Najjah Hassan Agha, who both died in an air attack on their home three weeks ago, according to Mouwaia Hassan Agha, a cousin.

A portion of the house, in the town of Sarmin, was still standing. The rest was reduced to nothing. In a video of the aftermath kept by Agha on his phone, grief-stricken family members and volunteers dart around the grounds, unsure where to look for the bodies. Seven members of the family were eventually pulled out, along with a neighbor.

Najjah was found in her mother’s arms, said her father, Fidaa Hassan Agha, who had been in another town when the bombs fell, trying to find temporary shelter for his family. Two of his siblings – a 10-year-old sister and a 13-year-old brother – were also among the dead, he said in a voice message sent from his tent. Mohamed’s body, he added, was dismembered.

His son had been terrified of the planes, his father recalled. When they circled, “he would run to me and try to hide.”

“In other things,” the father added, “he was courageous.”

The Washington Post’s Saeed Eido contributed to this report. 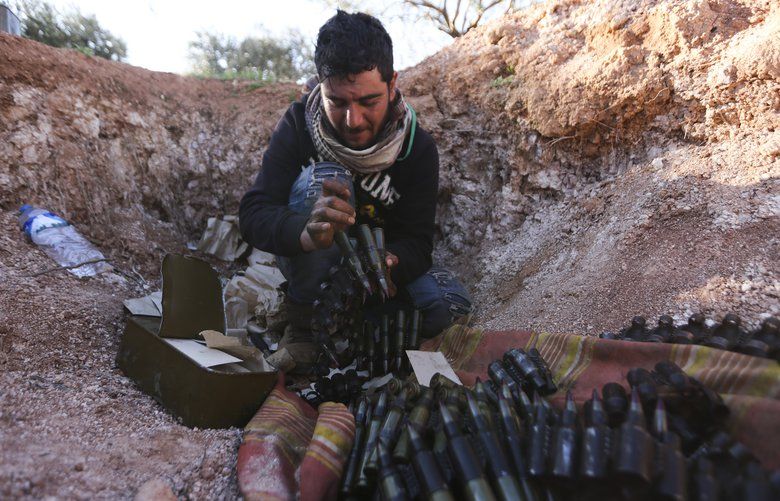