Skip to content
By
Paul Rogers
The Mercury News

SAN JOSE, Calif. — The heavy smoke from wildfires that choked much of California in recent weeks was more than an inconvenience.

It was deadly. And it almost certainly killed more people than the flames from the massive fires themselves, health experts say.

Between Aug. 1 and Sept. 10, the historically bad concentrations of wildfire smoke were responsible for at least 1,200 and possibly up to 3,000 deaths in California that otherwise would not have occurred, according to an estimate by researchers at Stanford University. Those fatalities were among people age 65 and over, most of whom were living with pre-existing medical conditions like heart disease, diabetes and respiratory ailments.

By comparison, through Wednesday, 26 people have died directly in wildfires this year statewide.

“Clean air is much more important than we realize,” said Marshall Burke, an associate professor of earth system science at Stanford who calculated the impacts. “When you look at it on a population level, you can see very clearly that breathing clean air has huge public health benefits, and breathing dirty air has disastrous consequences.” 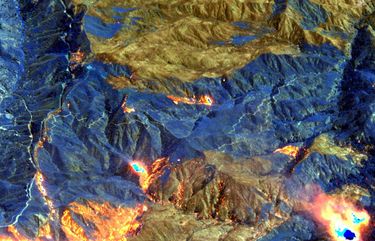 Decades of medical research has shown that soot is among the most dangerous types of air pollution to human health. Known as “PM 2.5,” for particulate matter that is smaller than 2.5 microns in size, the microscopic soot particles are so small that 30 or more of them can line up along the width of a human hair.

Coming from diesel trucks, wildfires, power plants, fireplaces and other sources, the tiny particles can travel deep into the lungs, even entering the bloodstream, when people breathe them in high concentrations.

In mild levels they can cause itchy eyes and sore throats, coughing and a tight feeling in the chest. In more severe instances, they can trigger asthma attacks, heart attacks, strokes or respiratory failure, particularly in the elderly, infants and people with existing heart and lung problems.

Burke and Sam Heft-Neal, a research scholar at Stanford’s Center on Food Security and the Environment, looked at a study published last year that used Medicare data to show when levels of particulate pollution increased in communities around the United States, the death rate of people 65 and over also increased, as did emergency room visits.

That study, by researchers at the University of Illinois and Georgia State University, found that for each day particulate air pollution increased by about 10% over typical levels — or 1 microgram per cubic meter — there was an increase in deaths over the next three days of 0.7 per 1 million people over 65, and a jump in emergency room visits among the elderly by 2.7 per 1 million people.

California has roughly 6 million people over age 65. The Stanford researchers compared air pollution readings during California’s fires with death rates and emergency room rates from the previous study to conclude that at least 1,200 “excess deaths” occurred from Aug. 1 to Sept. 10, along with about 4,800 extra emergency room visits.

“These are hidden deaths,” Burke said. “These are people who were probably already sick, but for whom air pollution made them even sicker.”

Smoke levels broke all-time records in California. The Bay Area Air Quality Management District called 30 “Spare the Air” days in a row from August 18 to September 16. Soot levels exceeded federal health standards for 19 days. Air quality was even worse in the Sierra, the Sacramento Valley and parts of Southern California, where it reached 10 to 15 times the federal health standard. On Sept. 9, smoke turned the air across Northern California an apocalyptic orange color, making international news.

Burke noted Stanford’s analysis doesn’t include very young children or people under 65 with serious respiratory or heart conditions. Nor does it include Oregon or Washington, where major fires also are burning.

“It makes total sense,” said Dr. John Balmes, a professor of medicine at UC San Francisco and a member of the California Air Resources Board. “I think it’s a fine preliminary analysis. It should give us pause.”

In recent days, Bay Area air has cleared. But there is still at least another month of fire season.

Balmes and other experts say it’s key when people can smell smoke outdoors that they go inside and close doors and windows. On very smoky days, towels, masking tape or painter’s tape can block leaks. Air purifiers, and wearing N95 or KN95 masks also can help.

“I don’t want to panic people who are healthy and without pre-existing disease, but we should reduce exposure as much as possible,” Balmes said. “You should stay indoors, and not be outside any more than you have to be. Exercising outdoors when the air quality is bad is particularly problematic.”

The big unanswered question is whether exposure to thick wildfire smoke has long-term effects on healthy people. A study published this summer by the University of Montana found that of 95 people who lived in the small town of Seeley Lake near Missoula — where wildfire smoke choked the area for 49 days in 2017 — roughly one-third had compromised lung function two years later.

Other studies of wildland firefighters are ongoing.

But the public and media pay more attention to the danger of the flames than the smoke, many experts say.

“We are subject to our own evolutionary biology,” said Dr. Anthony Harris, medical director at WorkCare, a healthcare company based in Anaheim. “Those things that are immediate we see and are alarmed by. But studies show that fear only lasts for about two weeks in terms of behavior modification. So the notion that I might have a poor outcome in 15 years because of the smoke I am inhaling today just doesn’t cause a rise in the awareness of people.”