Last week, a “thousand-year” heat wave baked the Pacific Northwest and adjacent British Columbia with widespread highs topping 100 degrees, resulting in a death toll in the hundreds. Lytton, Canada, climbed to 121 degrees and established new national records three days in a row before the town burned in heat-intensified wildfires.

The National Oceanic and Atmospheric Administration announced Friday that the heat wave helped the United States clinch its hottest June on record. Eight states had their hottest Junes, including Arizona, California, Nevada and Utah.

These four states are at the heart of yet another heat wave developing in the West that could challenge records and bring dangerously hot temperatures. It will mark the third punishing heat wave in the West this summer, including last week’s in the Pacific Northwest and a record-breaking event in mid-June.

This heat wave will not likely be as extreme as the event in the Pacific Northwest, but temperatures could challenge all-time highs around Las Vegas, Redding, Calif., and Sacramento and a few other places between California’s Central Valley and southern Nevada. 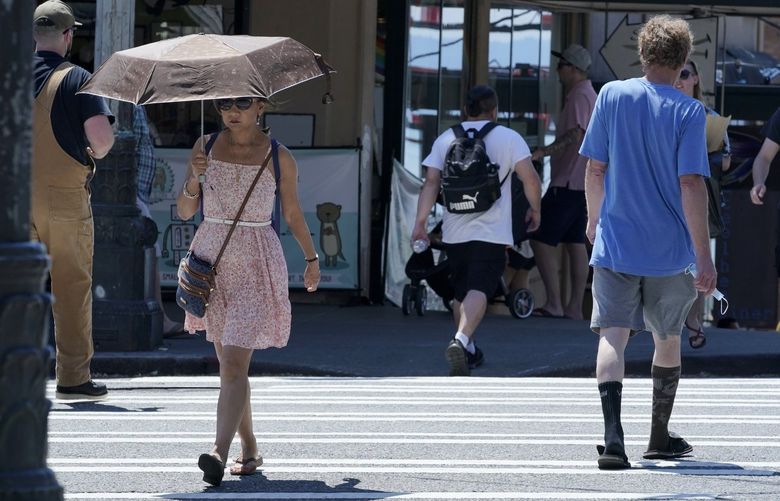 The relentless heat is also exacerbating drought that continues to reshape landscapes and severely burden water resources, while setting the stage for a potentially disastrous wildfire season.

The worst of the developing heat wave is expected Friday through Monday. At least 28 million people are slated to weather highs in the triple digits into next week.

The exceptional temperatures are linked to a “heat dome,” or a ridge of high pressure, establishing itself over the Four Corners region. It will meander west in the coming days, reinforced by a secondary zone of high pressure cresting to the north in southwest Canada on Friday. By Saturday, that additional high pressure will swing through Alberta and Saskatchewan; the synergy between the two will yield a multiday stretch of high temperatures 20 degrees or more above average.

“Extreme heat will significantly increase the potential for heat related illnesses,” warned the National Weather Service in Hanford, Calif., which serves the Golden State’s Central Valley. “Confidence is very high for a dangerous heat wave to persist through Monday and maybe into Tuesday.”

In Hanford, temperatures could hit 110 degrees Friday through Monday. Records in Hanford date to 1899, and show that highs of 110 degrees or greater have occurred on four or more consecutive days on only five occasions. That makes the duration and magnitude of the episode a once in a roughly 20-year event.

After topping 100 on Thursday, Sacramento is looking at four more days with highs in the triple digits between Friday and Tuesday. Saturday is predicted to be the hottest day, with the Weather Service noting that downtown Sacramento has about a 50% chance to reach its record of 114 degrees.

Fresno, Calif., may also come close to its all-time high of 115 with predicted maximum temperatures above 110 over the weekend.

Redding is likely to hit 111 degrees Friday, 116 on Saturday and 117 on Sunday, near its all-time high of 118. Highs Monday may be a slightly less inhospitable 112 degrees. The city has never recorded more than three consecutive days at 113 degrees or greater.

Modesto, Calif., will see highs around 109 degrees both weekend days.

Potentially more concerning will be the overnight lows, which won’t be very low at all — temperatures may dip only into the upper 70s or lower 80s in some spots. On Saturday night, Modesto is projected to fall only to 80 degrees before temperatures skyrocket again in the morning. In fact, most of the Central Valley will not fall beneath 80 degrees during the overnight period on Saturday.

Central Valley locations “will be extremely warm overnight, where high minimum temp records may be achieved as well,” wrote the Weather Service in Sacramento. Warm overnight lows are especially dangerous for anyone without air conditioning because they make it difficult for the body to enter its natural cooling phase.

It’s not just central California that will be experiencing saunalike warmth. Salt Lake City could be near 100 degrees each day through Tuesday. It has already hit the century mark 11 times this year and could be on its way to challenging the annual record of 21 occurrences.

Las Vegas will be scorched by heat that’s extreme even for the Nevada desert, with highs in the 110s likely through Tuesday. Both weekend days could peak near 117 degrees, which would match the city’s record.

“[T]he entire population is at a very high risk of heat-related illness due to both the long duration heat, and the lack of overnight relief,” wrote the Weather Service office serving the area around Las Vegas. Nighttime lows may only drop to the low 90s, challenging records.

A few other long-standing records could topple, like in the Yosemite Valley of California, which is forecast to hit 110 degrees both weekend days. It’s been 106 years since that last occurred.

Areas along California’s coastline will elude the heat. San Diego is predicted to see highs in the comfortable mid-70s through the weekend with mostly 70s in the San Francisco Bay Area, as well. Los Angeles will be in the 80s. But temperatures will heat up rapidly in the interior valleys and lower mountains adjacent to these population centers.

Death Valley, Calif., notorious for holding the record for the planet’s highest temperature, is forecast to see exceptional heat. It hit 126 degrees Wednesday and Thursday and is predicted to be at least this hot through Monday. Nighttime lows may stay above 100 until the middle of next week.

Sunday marks the anniversary of Death Valley’s world record high of 134 degrees set in 1913, although some question its legitimacy. Temperatures are unlikely to be that high this weekend.

The sweltering heat expected in Death Valley comes on the heels of its hottest June on record. And it was just three summers ago that it posted the hottest July ever recorded on the planet for the second year in a row. During that month, it hit at least 120 degrees on 21 days.

The heat should finally begin to abate toward the middle of next week, but probably not by much. Signs point to continued anomalously hot conditions remaining across the West as a near total lack of moisture in the air relentlessly dries out the landscape.