When Interstate 71 arrived in Columbus in the 1960s, the South Linden neighborhood was largely cut off from the rest of the city, wedged between railroad tracks to the south and east and the new concrete highway to the west.

More than a half-century later, autonomous technology is helping reconnect South Linden with the rest of Ohio’s capital. An electric-powered shuttle funded mostly by the federal government will give residents access to services that have slowly vanished from the area. The project, called Linden LEAP, will also provide much-needed data for other cities contemplating similar transportation alternatives.

On Wednesday, South Linden became home to what’s been billed as the U.S.’s first daily, public residential autonomous shuttle. Seven days a week for the next 12 months, residents can ride for free on tall, colorful vehicles that resemble a cross between a minibus and a van. They travel a route that extends almost 3 miles — starting at the Linden Transit Center, running through the city’s biggest public housing development, and on to a recreation center and finally St. Stephen’s Community House, which provides senior, day-care and health services to 22,000 residents annually. 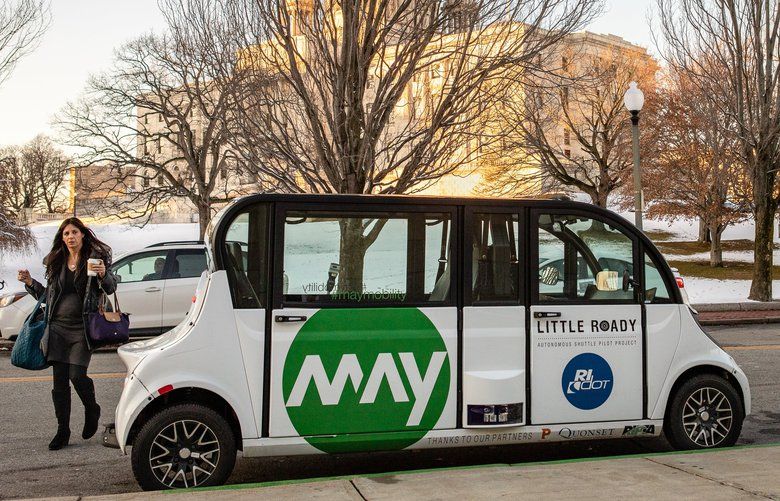 Are self-driving cars a solution for Bellevue? An East Coast test shows their promise and challenges

The shuttle is one of several experiments arising from the Smart Cities Challenge, an Obama administration program aimed at encouraging mid-size cities to develop advanced transportation modes using (among other new technology) electric and autonomous vehicles. Columbus beat out six other finalists — Austin; Denver; Kansas City, Missouri; Pittsburgh; Portland, Oregon; and San Francisco — among the 78 that took part.

With a $40 million federal grant, an additional $10 million from the late Paul Allen’s Vulcan, plus contributions and services from regional employers including the Ohio State University and Honda, “Smart Columbus” was born.

“Columbus was chosen to model how new technologies work in a real city, with real people, solving real problems,” Smart Columbus says on its website. “Conducting demonstrations will be our new way of attacking challenges.”

But behind the gizmos and technical wizardry are real-life problems. Columbus is growing at a fast clip, surpassing San Francisco in 2018 with a population of 892,533 people. The metropolitan area, estimated at about 2.4 million residents, is expected to reach 3 million by 2050, according to the Mid-Ohio Regional Planning Commission.

While increasing transit options is certainly a goal, Smart Columbus’s original objective was to make sure neighborhoods like South Linden don’t get left behind. Prominent in the city’s grant proposal was its aim to reduce South Linden’s above-average infant mortality rate. By improving access for pregnant women to St. Stephen’s clinic and its food pantry, the city hoped to show it could bring that rate down. (By May, Smart Columbus plans to have 300 pregnant women enrolled in a program to guarantee they have transportation to prenatal care.)

“St. Stephen’s was largely disconnected from transit,” said Jeff Kupko, an engineer with Michael Baker International Inc., who serves as a project manager for Smart Columbus. “Some people were limited in the amount of food they took from the food pantry because it was too far to walk to the bus.”

The shuttle service will last 12 months and costs $1.13 million. Although the program (like the others under Smart Columbus) is intended as a testing ground, Kupko said some projects will eventually be taken over by COTA and made permanent. But the main point of Smart Columbus, he said, is to share the results with other cities so they can learn from Columbus’s experience.

Last week, Kupko was at St. Stephen’s, making final tweaks to the EasyMile EZ10 shuttle buses. The vehicles, which cost $320,000 each, are configured to hold about 12 people and run 14 hours on a single charge through all but the most extreme temperatures. They can operate at Level 4 autonomy, meaning full autonomy with the ability for an onboard operator to take control (there’s no steering wheel or brake pedal, just a double-joystick controller).

Short of an emergency, “operators will help with wheelchairs, strollers, general wayfinding and act somewhat as a brand ambassador for the shuttle and Smart Columbus,” Kupko said.

The National Highway Traffic Safety Administration wrote special rules to govern Linden LEAP. Vehicle speeds are limited to 25 miles per hour; shuttles must stop service for 90 minutes twice daily as neighborhood schools welcome or dismiss students; and the lidar-equipped shuttles must stay on a designated route.

Marilyn Mehaffie, chief executive officer of St. Stephen’s, said she welcomes the attention being paid to South Linden by Smart Cities and other recent initiatives. Over the course of her 32 years at St. Stephen’s, she’s seen poverty and opioids ravage the community. Many parents are working two or three jobs, housing costs are a constant worry, she said, and some residents end up raising their own grandchildren or great-grandchildren.

Yet Mehaffie added that there’s a high percentage of owner-occupied homes with no outstanding mortgages, suggesting residents have a long-term commitment to the neighborhood.

“There are committed players at the table including residents, who are ready to be a catalyst for change in this neighborhood,” she said.