Researchers are befuddled by a group of killer whales that are attacking boats off the coasts of Spain and Portugal.

The whales appear to have targeted sailboats traveling along the Strait of Gibraltar to Galicia in multiple incidents over the last two months, damaging boats and injuring sailors.

Sailor Victoria Morris described an incident to the Guardian that felt “totally orchestrated” after a group of nine whales surrounded a boat and rammed it for an hour.

“The noise was really scary. They were ramming the keel, there was this horrible echo, I thought they could capsize the boat,” Morris said. “And this deafening noise as they communicated, whistling to each other. It was so loud that we had to shout.” 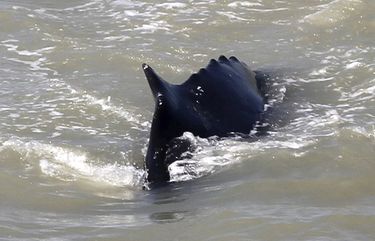 Australians hope to save whale from crocodile-infested river

The boat needed to be towed away because the damage was so extensive. The crew later reported the rudder was rendered unusable and there were bite marks on the keel, the ship’s underside.

Researchers said it was unusual for orcas to become so aggressive, though the highly intelligent animals are known to follow boats, and even nibble at rudders to play.

Espada added that it was possible the animals were stressed — the area the attacks have occurred in features heavy boat traffic and has been overfished, dwindling the orcas’ food supply.

Noting the abnormal behavior, Spanish authorities are warning boaters to keep away from any pods of killer whales.