Skip to content
By
Jen Skerritt
and
Robert Tuttle
Bloomberg

The main border posts in Alberta and Manitoba were closed Monday, with commercial traffic to the U.S. blocked by semitrailers and farm equipment driven there by people opposed to COVID-19 vaccine rules.

Both were still closed to commercial vehicles as of 9:14 a.m. New York time on Tuesday, according to the website of Canada’s border agency. However, the Alberta protest appeared to be winding Tuesday morning, according to CBC News. 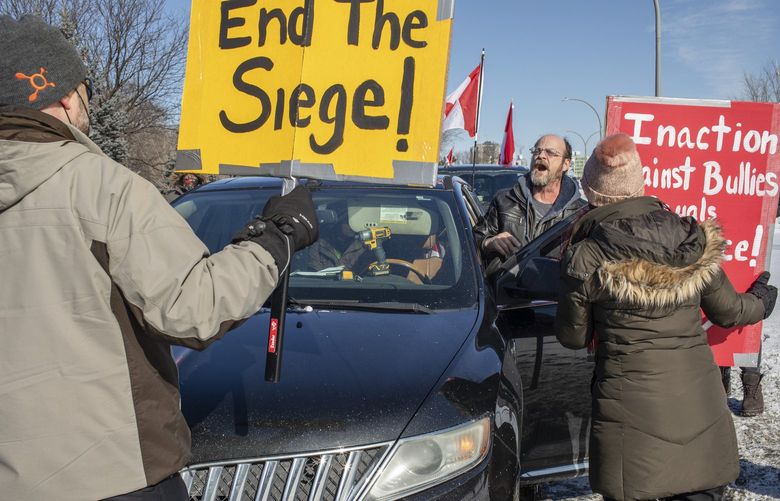 The crossings — one leads to Pembina, North Dakota, and the other to Sweet Grass, Montana — are the second- and third-busiest for freight trucks along the western border of the two countries. They saw a combined 392,000 trucks enter the U.S. from Canada last year, according to data from the U.S. Department of Transportation.

The protests started in reaction to Canadian and U.S. laws requiring truckers crossing the border to be fully vaccinated, but they’ve morphed into a rally against COVID restrictions. After a group of demonstrators blocked the Ambassador Bridge between Detroit and Ontario for six days, snarling trade, Trudeau invoked Canada’s Emergencies Act on Monday.

The move gives the government the right to ban public assembly in specific locations and to requisition property for managing the situation, including tow trucks. It also attempts to cut off fundraising activities for the protesters — expanding money-laundering provisions and allowing banks to freeze accounts without a court order.

The protests in Canada have been mostly peaceful, but not entirely. On Monday, the Royal Canadian Mounted Police arrested 12 people who were part of the Alberta protest and seized a cache of ammunition and weapons, including a machete. The RCMP said they believed the group had “a willingness to use force against the police if any attempts were made to disrupt the blockade.”

Along a highway about 10 miles from the border post in Coutts, Alberta, protesters railed against Trudeau and government overreach on Monday.

“I grew up in Europe and I’ve been to eastern European countries and I’ve seen what communism does to a country. It’s not what we want in Canada,” said Gary Baarda, a 52-year-old retired dairy farmer and immigrant from the Netherlands. If police try to break up the protests, “we will go arm-in-arm. They can remove us or shoot at us. We will not be violent.”

At Emerson, Manitoba, protesters were allowing transport trucks with live animals to pass through, but other U.S.-bound vehicles were forced to find alternate routes. Truck driver Hon Cheah had to call his dispatch when he could not pass the Manitoba blockade while trying to haul 32,000 pounds of fish to Wisconsin. “Now I can’t go through,” Cheah said. “I hope they stop it.”

The Emerson blockade consisted of about 75 vehicles parked on the northbound and southbound lanes. Tractors outfitted with “no more mandate” signs were flanked by pickup trucks with Canadian flags. About six semi trailers were part of the convoy; campers dotted parts of the highway. Some of the protesters have been there for days.

“I’m risking everything I have,” said Jake Klassen, 39, who has been a truck driver for nearly two decades and drives three weeks of the month hauling loads to the U.S. as an owner-operator. “I want to be able to have my own choice.”

Klassen has two campers and his black semi trailer at the Emerson blockade. They could potentially be seized; Klassen described Trudeau’s move to invoke emergency powers as a “scare tactic” so “they can take everything from us,” he said.

Klassen said he hasn’t been able to visit his nine-year-old daughter in months. She is receiving palliative care at St. Amant, a care residence in Winnipeg, but due to restrictions that require visitors to be fully vaccinated, Klassen and his wife can’t see her.

“This is something worth fighting for,” he said.

At a protest site near Milk River, Alberta, just north of the border, 21-year-old farmer Marshall Bock said the vaccine mandates were a case of government going too far. “I think it should always have been free choice,” said Bock, adding that he was willing to get arrested. Shutting the border “to get the government to hear you, I think it makes a point.”

Soon after, some protesters decided they had made their point. They announced they would be pulling out, then sang the national anthem, “O Canada.” Trucks blared their horns.