A California-made video seeded “plandemic” panic around the world.

The coronavirus crisis is energizing America’s anti-vaccine movement and expanding its reach.

Even as countries and companies race to develop a safe and effective vaccine, U.S. activists and influencers are working to undermine it, seizing on the legitimate fear that the vaccine might be rushed and leveraging that to further a broader anti-vaccine — even anti-science — agenda.

It is a campaign that is primarily playing out on U.S.-owned social networks such as Facebook and YouTube, where misinformation about a potential coronavirus vaccine is flooding hate networks, neighborhood groups and “wellness” communities focused on food or yoga.

In these digital spaces, vaccine hesitancy is mixing with coronavirus denial and merging with far-right American conspiracy theories, including QAnon, which claims that President Donald Trump is secretly fighting a cabal of Satanist pedophiles embedded in the so-called “deep state.”

What’s emerging is a sprawling, international movement that opposes basic public health measures, such as vaccines and masks, denies or downplays the reality of the pandemic, and is increasingly, though not always, linked to the politics of the far right.

It features American figures such as Robert F. Kennedy Jr., a prominent anti-vaccine campaigner, who in August addressed a massive rally in Berlin against coronavirus measures. The crowd included vaccine skeptics, conspiracy theorists and far-right groups, among others.

“The U.S. anti-vaccination movement is globalizing and it’s going toward more extremist tendencies,” said Peter Hotez, dean of the School of Tropical Medicine at Baylor College of Medicine in Houston and the author of a book on the anti-vaccine movement.

It is hard to quantify the spread of “anti-vax” content across all places and platforms. One report by the U.K.-based Center for Countering Digital Hate found that the 147 largest social media accounts of 409 anti-vaccine groups the organization tracks had collectively increased their followers by at least 7.8 million since 2019.

Those who study vaccine hesitancy and social networks warn that, left unchecked, the movement may lower the number of people willing to be vaccinated against the coronavirus, even once a vaccine is proven safe and effective in clinical trials.

Advertising
Those who study vaccine hesitancy and social networks warn that, left unchecked, the movement may lower the number of people willing to be vaccinated against the coronavirus, even once a vaccine is proven safe and effective in clinical trials.

Recent polling suggests that only about 50 percent of Americans would definitely accept a coronavirus vaccine. That figure is comparable for Britons. The number of Germans who said they would be willing to get a hypothetical coronavirus vaccine dropped to 64 percent in June, down from 79 percent in April, one survey found.

Last year, the World Health Organization warned that a rise in vaccine hesitancy could roll back progress on vaccine-preventable diseases, including measles and polio. Since the start of the pandemic, the WHO has once again found itself defending the lifesaving power of vaccines.

“The anti-vaccine movement, they can build narratives to fight against vaccines but the track record of vaccines tells its own story and people should not be confused,” Tedros Adhanom Ghebreyesus, director general of the World Health Organization, said in September.

Some of the loudest voices coming out of the United States these days are sophisticated, well-funded anti-vaccine “proselytizers,” said Imran Ahmed, chief executive officer at the Center for Countering Digital Hate and an expert in malignant online behavior.

“The digital anti-vaccine movement is an American disease,” he said, “and it is spreading around the world.”

The digital anti-vaccine movement is an American disease, and it is spreading around the world.”
— Imran Ahmed, CEO, Center for Countering Digital Hate

For years now, well-organized and funded U.S. activists have been central to the global spread of dis- and mis- information about vaccine safety, particularly the false claim that vaccines cause autism.

When it comes to false information about vaccines, the United States “is sort of a superspreader,” said Heidi Larson, director of the Vaccine Confidence Project at the London School of Hygiene and Tropical Medicine and the author of “Stuck,” a book investigating why vaccine rumors don’t go away.

As the novel coronavirus made its way around the world in the spring, so did questions about an eventual vaccine.

Before the pandemic, the average adult did not think about vaccines until they had children, said Kolina Koltai, a postdoctoral fellow at the Center for an Informed Public at the University of Washington.

Now, information about vaccine development and testing is everywhere from Facebook groups to the nightly news. “At a global level, you have people talking about vaccines: Who is producing them? What are their political ties?” she said. “The anti-vaccine movement was already asking those questions.”

A major turning point was the May 4 release of a conspiracy video, “Plandemic,” featuring a discredited American scientist with ties to the anti-vaccine movement.

The video cast the coronavirus crisis as a shadowy plot orchestrated by the “scientific and political elite.” (There is no evidence to support this.) It falsely claimed that a coronavirus vaccine would “kill millions.” (Immunization prevents between 2 million and 3 million deaths per year, according to the WHO.)

An analysis of the video’s viral spread by researchers at Stanford’s Internet Observatory Cyber Policy Center found that it was watched millions of times before fact-checks started circulating widely.

By then, it was spreading in at least 10 languages. “Much like the disease it purports to explain,” the analysis found, “the video traveled rapidly across international boundaries in a matter of days.”

Through the spring and summer, conspiracy theories about the coronavirus started to merge with other conspiratorial movements, most notably QAnon.

Neil Johnson, a professor of physics at George Washington University and the lead author of a recent study on the coronavirus and anti-vaccination views, studies how content moves through digital networks.

In 2019, QAnon was “nowhere on the map,” he said. “Now it’s in a lot of places.” (Facebook on Tuesday imposed sweeping new sanctions on the conspiracy theory across its platforms.) 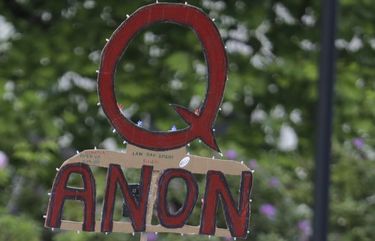 The uptick in digital organizing is influencing local movements and inspiring in-person organizing, from massive rallies to small-scale protests where people rally under slogans like “health freedom” and “save the children” — a QAnon signature.

In London, protesters have defied a ban on large gatherings to assemble for rallies against mask mandates and vaccines.

Ultimately, these in-person protests represent just a small fraction of the people being reached, primarily via social media, with this type of content, experts said.

As the pandemic continues, these causes may continue to feed off each other online, invigorating hardcore communities and converting newcomers who happen to find conspiratorial, anti-vaccine content in their digital spaces.

“I really think this is going to evolve forward in the U.S., Canada, the U.K, Australia, South Africa,” said Johnson, the physicist who studies social networks.

“The battle lines are forming.”