As the western U.S. bakes and burns under an unprecedented heat dome, Henri leaves a deluged East Coast staggering after a summer of deadly floods and record-setting tropical storms. Climate scientists say one is due to the other. Both come against the backdrop of a warming planet.

The high pressure that got stuck across the West causing drought and fire actually created the conditions for low-pressure-driven storms in the East. So while July was the hottest month ever recorded on Earth, it was the sixth-wettest in U.S. records going back 127 years, according to the National Centers for Environment Information.

Heat in both the Pacific and the Atlantic has helped strengthen large high pressure systems, said Jim Rouiller, lead meteorologist at the Energy Weather Group. In the West, this has added to the drought and wildfires; in the East, it has steered tropical systems up the coast and kept the region warm and moist. In between has been a low-pressure trough that has kept the rain falling across the central and eastern U.S.

Abnormally warm water in the Atlantic has been providing extra moisture to the storms, said Paul Pastelok, a meteorologist with commercial forecaster AccuWeather Inc.

At least 21 people died in flooding in Tennessee and about 40 more are missing, according to Humphreys County Emergency Management Agency representative Grey Collier. “Many of the homes have been removed from their foundations,” Collier said by telephone. Record rains dropped more than 17 inches (43 centimeters) in McEwen, along with more than 10 inches across a wide section of the state. 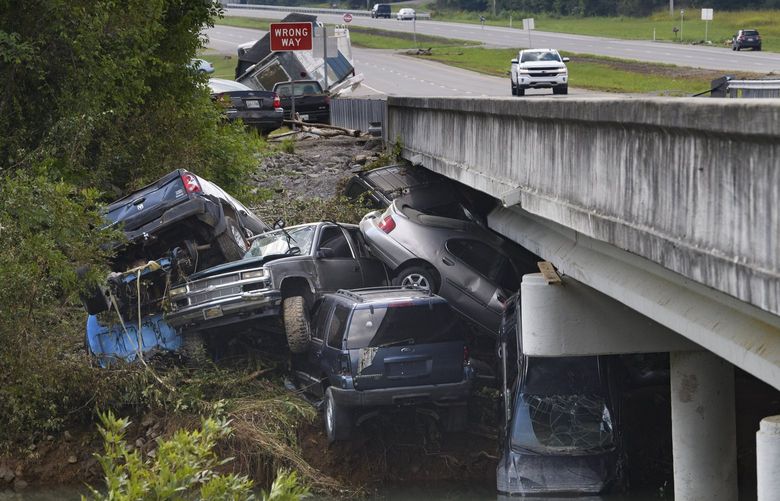 A separate system, Tropical Storm Fred, last week dumped more than a foot of rain on North Carolina, where 98 people had to be rescued, according to Gov. Roy Cooper. At least four have died, according to news reports.

The East Coast’s summer has felt like a list of uninvited guests — Tropical Storms Claudette, Danny, Fred, and Henri, as well as Hurricane Elsa. In fact, Henri is the latest in a grim parade of extreme weather events worldwide as climate change takes hold. Massive wildfires have blackened not only huge swaths of California, but also Greece, Algeria and Siberia, sending smoke over the North Pole for the first time on record.

And as wildfires hit eastern Siberia, western and central Russia were cold.

Meanwhile, floods have plagued northern Europe, killing scores in Germany and Belgium and causing billions of dollars of damage. In Germany, July’s rain and flooding were the worst natural disaster since the 1960s.

Back in the U.S., extreme has simply become ordinary. A spate of tornadoes ripped through suburban Philadelphia. Boston had its wettest July on record. The high in Portland, Oregon, hit an unthinkable 116 degrees in June.

Through the first six months of 2021, the U.S. has suffered eight disasters costing $1 billion or more that have also killed 331 people, according to the National Centers for Environmental Information. The worst disaster was last February’s winter storm that crippled the Texas electric grid and killed at least 172 people and cost $20.4 billion.

Texas grid operators say they expect record-breaking power demands this week from the heat. The corridor from Hartford, Conn., to Boston and the area around New York City have got about twice the normal amount of rain in the last 90 days, said Bryan Jackson, a forecaster with the U.S. Weather Prediction Center. Meanwhile, many areas in the Northeast, such as the central Appalachians stretching into Pennsylvania, are having an average summer.

The warm water off the coast has fueled many of the eight tropical systems named across the Atlantic this year. Henri, for instance, didn’t form off the coast of Africa, as many destructive hurricanes do, but was born from a weather front that crossed the Northeast U.S. and got a boost from the warm Atlantic, Pastelok said. Drought has captured more than 95% of the land in 11 western states, including all of California, Oregon, Nevada, Idaho, Montana, and Utah, according to the U.S. Drought Monitor.

Rouiller, who’s been a meteorologist for 40 years, says the summer has forced some rethinking among him and his colleagues.

“This is very abnormal,” he said. “There is also a stronger signal for global warming in the picture. I do believe now more than I have that it is occurring. I just don’t know the magnitude but the change is happening and it is going to keep on increasing.”