WASHINGTON – The violent mob that stormed the U.S. Capitol on Jan. 6 came perilously close to Vice President Mike Pence, who was not evacuated from the Senate chamber for about 14 minutes after the Capitol Police reported an initial attempted breach of the complex – enough time for the marauders to rush inside the building and approach his location, according to law enforcement officials and video footage from that day.

Secret Service officers eventually spirited Pence to a room off the Senate floor with his wife and daughter after rioters began to pour into the Capitol, many loudly denouncing the vice president as a traitor as they marched through the first floor below the Senate chamber.

About one minute after Pence was hustled out of the chamber, a group charged up the stairs to a second-floor landing in the Senate, chasing a Capitol Police officer who drew them away from the Senate.

Pence and his family had just ducked into a hideaway less than 100 feet from that landing, according to three people familiar with his whereabouts, who spoke on the condition of anonymity because of the sensitivity of the situation. If the pro-Trump mob had arrived seconds earlier, the attackers would have been in eyesight of the vice president as he was rushed across a reception hall into the office.

The proximity of the Jan. 6 mob to the vice president and the delay in evacuating him from the chamber – which have not been previously reported – raise questions about why the Secret Service did not move him earlier and underscore the jeopardy that top government leaders faced during the siege.

As an increasingly hostile and violent crowd surrounded the Capitol, Pence remained center stage, presiding over a joint session of Congress for more than an hour after the Capitol Police chief said he alerted his superiors that his force was being overrun and needed emergency reinforcements.

The potential exposure of the vice president underscores how law enforcement agencies struggled to manage the rapidly expanding crisis in real time.

The Secret Service declined to comment on any element of Pence’s movements in the Capitol or his evacuation, other than to say that he was “secure” during the siege. 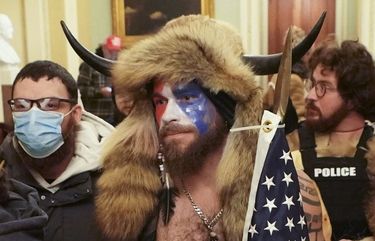 “While the Secret Service does not speak specifically about the means and methods of our protective operations, Vice President Pence was secure at all times on Jan. 6,” Secret Service spokeswoman Catherine Milhoan said in a statement.

Pence was ultimately evacuated from his office off the Senate floor to a more secure location elsewhere in the Capitol complex. It is unclear exactly how long that took. But as the vice president made his way through the building, a growing number of rioters were joining their cohorts and coursing through the Capitol’s labyrinthine halls.

Once inside, they used pipes, flagpoles and other weapons to shatter windows and break furniture. One police officer later died of injuries sustained during the onslaught.Dozens of officers were wounded, including some who were struck with a fire extinguisher and another who was dragged down a set of steps and attacked by the crowd.

Many of those in the mob had their sights on Pence – enraged that he had refused President Donald Trump’s demand that he head off the electoral college count that formalized President-elect Joe Biden’s victory.

According to the FBI, one man who was charged this week with trespassing and disorderly conduct after making his way into the Senate chamber said in a YouTube video: “Once we found out Pence turned on us and that they had stolen the election, like, officially, the crowd went crazy. I mean, it became a mob.”

At one point, a group of rioters began chanting, “Hang Mike Pence!” as they streamed into the main door on the east side of the Capitol.

One man who made his way into the Senate chamber reached Pence’s chair on the Senate dais. Shirtless, wearing face paint and a furry coyote-tail hat and carrying a six-foot-long spear, Jacob A. Chansley of Arizona left a note on the vice president’s desk that read in part, “it’s only a matter of time, justice is coming,” according to court filings.

Chansley – who has been charged with two felonies, including threatening congressional officials – told investigators he was glad to reach Pence’s desk because he believes the vice president is a child-trafficking traitor, but said he did not mean the note as a threat.

Pence had just begun presiding over the joint session of Congress that afternoon when law enforcement officials realized that the crowd massing around the Capitol had grown dangerous. Rioters had pressed up against the barriers surrounding the building – with some using them as weapons against the police.

At one point, a group of rioters began chanting, “Hang Mike Pence!” as they streamed into the main door on the east side of the Capitol.

Meanwhile, the joint session of Congress convened at 1 p.m. in the House chamber for an alphabetical roll call of each state’s electoral college results, quickly pausing when Trump’s allies protested Biden’s victory in Arizona, which sent Pence and senators across the Capitol to their chamber to debate challenges to that state’s electoral vote.

At 1:09 p.m., Sund said he told the top Capitol security officials, House Sergeant-at-Arms Paul Irving and Senate Sergeant-at-Arms Michael Stenger, that he wanted an emergency declaration and to call in the National Guard.

At 1:59 p.m., Sund said, he received the first report that rioters had reached the Capitol’s doors and windows and were attempting to break at least one window.

At about 2:11 p.m., video footage shows that the rioters successfully broke through a window with a piece of lumber. A minute later, a member of the mob entered through the window, the footage shows.

At 2:13 p.m., Pence suddenly left the Senate floor and was moved to the nearby office, according to C-SPAN footage and a Post reporter on the scene.

But the rioters were not far behind. They chased Capitol Police Officer Eugene Goodman up a flight of stairs, arriving on the landing at 2:14 p.m., video footage shows – seconds after the vice president had been whisked inside the office.

Pence’s Secret Service detail stood guard at the door. Inside the office with the vice president were his wife, Karen Pence, his daughter, Charlotte Pence Bond, and his brother, Rep. Greg Pence, R-Ind., who had gone to the Senate and was watching its debate over Arizona’s electoral vote with his sister-in-law and niece as the Capitol was being invaded.

Agents on the Secret Service’s protective details are drilled in training to focus on one strategy at the sign of danger: They must “cover and evacuate” their protected VIP. Yet, on the afternoon of Jan. 6, danger was already all around them and streaming through different parts of the building.

Twice the vice president’s agents told Pence that they recommended he and his immediate entourage evacuate the Capitol, according to two people briefed on the episode.

Pence declined the recommendation both times, saying he did not want to be driven out of his own office and the Capitol building by an unruly mob, the people said.

The third time, Secret Service didn’t give Pence a choice, the people said. Detail agents told Pence they were all going – that instant.

They left the office for a secure room in the Capitol complex. The evacuation route they took is unknown. A group of snipers on the counter-assault team that travels with Pence would have scoped out the path and ensured it was clear.

Pence and his detail did not encounter any rioters on their way through the overrun Capitol, according to the people familiar with the events. In addition to the vice president, the group that evacuated to the second location included Pence’s family, his chief of staff Marc Short, his press secretary Devin O’Malley and several other staffers.

The Post is not identifying the location in the Capitol complex where Pence was taken for security reasons.

It would take several hours before Capitol Police – aided by reinforcements of hundreds of D.C. police officers, FBI SWAT team members, Secret Service officers and National Guard soldiers – ejected the rioters from the grounds and secured the building.

As lawmakers debated where and how they should reconvene to continue the electoral vote count disrupted by the violent mob, Pence pushed to continue the session where it had begun – in the Capitol.

Once the Capitol Police gave the all-clear, Pence left his secure location and returned to the Senate chamber after 8 p.m.

Before Congress resumed its work, the vice president addressed the day’s violence in an unusual speech as president of the Senate.

“Today was a dark day in the history of the United States Capitol,” Pence said, adding: “We will always be grateful to the men and women who stayed at their posts to defend this historic place. To those who wreaked havoc in our Capitol today, you did not win. Violence never wins. Freedom wins. And this is still the People’s House.”